With paltry jump scares, and a killer with very little motive, besides being rude to him, Hell Fest will only scare up the desire to maybe go to a real horror fest.

It has been a while since Brooke and Natalie have gotten to hang out, mostly because Natalie has to work and study. However, with it being the middle of October, and Brooke trying to hook up Natalie with a guy named Gavin, they decide to go to Hell Fest. What seems to be a traveling attraction known for being one of the scariest. Well, that and someone being murdered and hung like a decoration a few years ago. However, with Brooke’s friend Taylor really into all things horror, she pushes everyone to enjoy Hell Fest as much as she does.

Which they do until they bump into “The Other.” He is the killer of the film and it seems the only reason he kills anyone is because they were being naughty, rude, or saw him kill someone. So with Natalie watching him kill a girl who bumped into him without apologizing, Gavin stealing, and the sins of the others, “The Other” tries to take out each character, one by one. 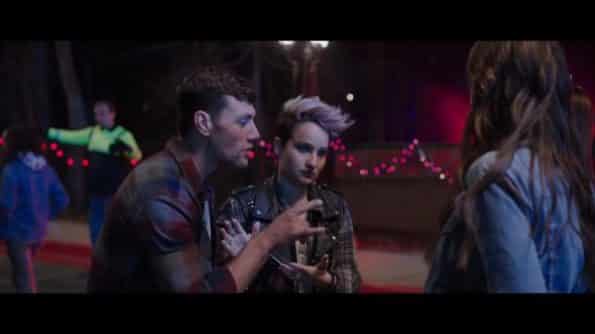 , it is hard to deny that even in a film like this, she is such a draw. Be it her look, charisma, or just something which goes beyond being easily described, she can easily hook an audience. Plus, whenever she was in a scene, she brought energy to it which the others didn’t. Making it where, even though Forsyth technically is the lead, Taylor-Klaus stole the show.

The Other’s Motive Is Assumed

One can only assume what “The Other’s” motive is. For the girl he killed years ago, she didn’t seem like a bad kid. So why she got killed is a bit of a mystery. However, this go around, you can only assume that if you aren’t a good kid, you get put on the chopping block. That or, as noted, you could blow his cover and make it where he can’t get home to his daughter.

The Story Is Very Bland

The gist of the story is Brooke trying to reconnect with Natalie and have her and Gavin hook up. Add in Taylor wanting to have fun and that’s it. As for talking about Natalie and Brooke’s past, like the significance of their shared necklace, which doesn’t allow the other to be mad, Taylor and Natalie’s beef? Anything which could count as character development? Even why Taylor is so hyped about all things horror? Nope, none of that exists here.

This May Make You Wanna Go To A Actual Halloween Attraction

Horror is not a genre covered a lot on this website since, frankly, I’m way too jumpy. With that said, the one thing Hell Fest does well is make the idea of going to a scare attraction seem kind of fun. Not for me personally, since I’d likely have a full-blown panic attack. However, between asylum tours, haunted cornfields, and things of that nature, this film makes them seem like something that needs to be on your bucket list. As someone who increasingly is enjoying the horror genre, I must note this film has a few jump scares and The Other at least was creepy. Not to the point of being worth putting on a pedestal with Michael Myers, Freddy, Chucky, or even Jigsaw, but good enough for this film. However, with no motive, no real story, and character development being non-existent, unless you need a fix or a warm-up for the many horror films coming this October, it’s a bit hard to say Hell Fest is worth it. At least at full price.