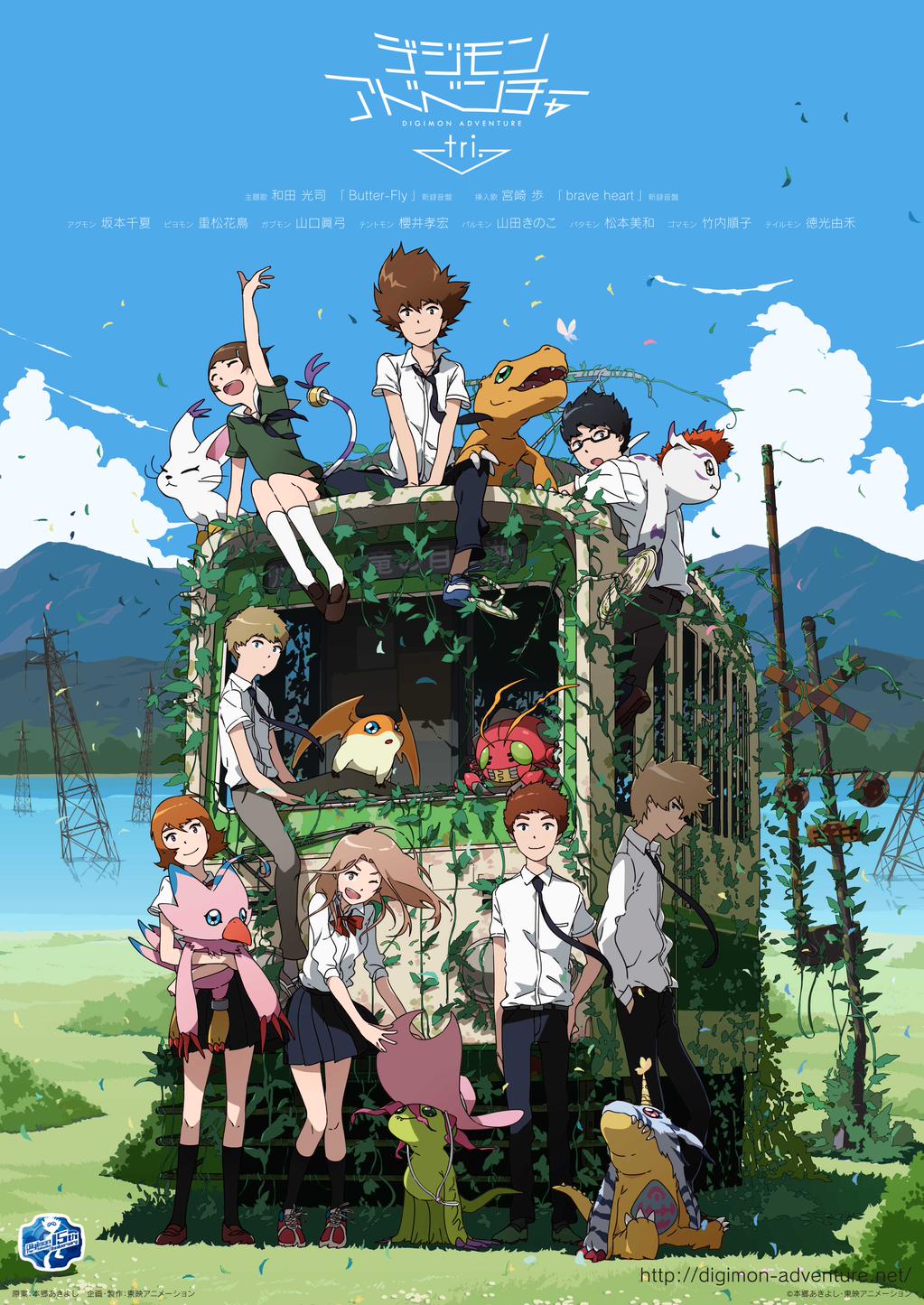 Like so many kids who were born in the 90s, many of my arguments dealt with which was better and often it would be one cartoon vs. another. For me, I was a devoted Digimon fan up until the 3rd season in which I had to tap out since the quality faded. However, now with Digimon Adventure Tri revisiting the original crew, one can only hope nostalgia won’t be the sole reason for checking into this special.

It has been a long time since we last saw the Digidestined and they have all grown up. Granted, they have yet become adults, but with Jo a senior, and Kari and TK also in high school, they surely aren’t the children we met more than a decade ago. They now are budding musicians, potential soccer stars, and while they may still carry their digivices on them, it seems that part of their life has been placed on hold for around 6 months.

That is, until, once more, Kuwagamon shows up and forced them out of semi-retirement. Which leads to a happy reunion for the original cast, but it does lead Tai to question his place in all this. Not as a leader, or even part of a team, but being that he is older he doesn’t take the destruction that he is part of lightly. He sees what Greymon does to an airport and questions if he actively wants to participate in that level of destruction.

His questioning of participating upsets Yamato (Matt in the dubbed version), for he sees any resistance, or non-participation, as running away. Leading to a rift between the two friends who perhaps are not only butting heads over Tai participating, but also their demand for their friends’ time. For, as noted, they aren’t children anymore. Everyone has things to do, a life to live, and it doesn’t necessarily revolve around the others they have shared an incredible journey with. In fact, it seems that before Kuwagamon got involved in their lives once more, finding them all in the same room was rare. Especially as Yamato requests people to see his band, and Tai wants people to come to his soccer game, and everyone has to either choose to support one over the other or not participate at all.

But, being that Kuwagamon, and this new Digimon named Alphamon, threaten the human world, one can only hope the team can once more become a cohesive unit to banish away the new tainted Digimon.

I liked the fact Tai, out of all the DigiDestined, actually decided to step back and question if they are really making things better or worse. For in many superhero or action titles, it seems no one really takes notice of the destruction. Yet Tai, after seeing what Greymon could do, questioned if perhaps it was morally right to do so. Something I sort of wish was done more often in the action genre.

The digivolution scenes were cool and, despite them being done for the majority of the digidestined’s Digimon, they didn’t lose their luster for they weren’t long and tedious.

I have absolutely no idea why the stream version was split into 4 parts. When I tried watching this part by part, honestly the special seemed so horrible that it ruined things for me. However, watching it as a whole helped immensely. To the point I didn’t finish the special due to nostalgia, but because I honestly wanted to see what could happen next, as well as learn what has gone on since we last were continuously voyeurs in these characters’ world.

For those not familiar with what had happened in the past, or who have forgotten, sadly there isn’t any recap to catch you up.

The animation is certainly not up to par with the other anime released this season, but one could argue they wanted to maintain some of the art style used in the original.

While the drama between characters was interesting, since you can tell there were rivalries and crushes among the group, I must admit that Alphamon didn’t really present any reason to care about its place in the special. It was presented as a villain, yeah, but without a definitive motive for destruction, besides trying to capture Meicoomon, it was hard to really get into the combat.

While we know Yamato and Tai are the leads, so naturally, their Digimon are going to be featured the most, and we will get to see their digi-volutions the most, I do wish we got to see more of the Champion, Ultimate, and Mega levels of the other Digimon.

The “Saikai” offering set a good foundation of what may come and, like the Sailor Moon reboot, I feel it mixes the potential for nostalgia with the overall potential of reviving an old franchise by revisits, and reimagining, familiar characters. Though with that said, Alphamon at this point honestly needs to be crafted into a more interesting entity. For whether he is the one causing tainted code in the digital world or just the hand of a bigger monster, I feel the personal lives of the DigiDestined outshined the participation of Digimon in the program. Assuming that makes sense.

Marvel’s Runaways is the kind of show you’d expect to be on FreeForm thanks to this eclectic group of angsty teens who are coming...
Read more

A part of me doesn't want to do this monthly, since I drop at least 25% of things I note I'm going to review,...
Read more

Overview Digimon returns for another round and while there isn’t a huge amount of action or compelling fights, we do get to see the challenges...
Read more