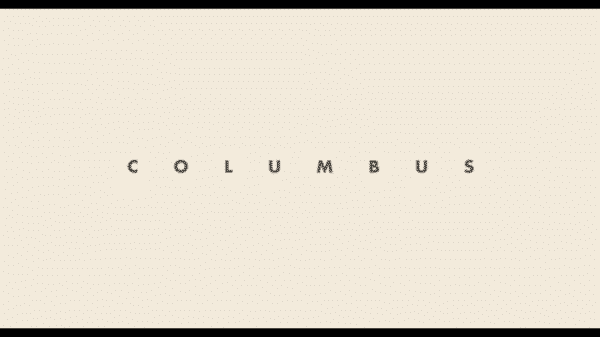 Haley Lu Richardson shines in Columbus and proves herself as one of the most underrated actresses in Hollywood.

At the heart of Columbus are two people trying to deal with life without their parent. For Casey, her mother Maria is a former meth addict and had a long string of terrible boyfriends. So while passionate about architecture, and even making connections thanks to going to talks and her outgoing personality, she fears leaving her mother behind. As for Jin? Well, his absentee father, who he hasn’t spoken to in over a year, who never sacrificed much for him, is in a coma. Something he is guilted to, by one of his father’s associates, Eleanor, into sticking around for.

Leaving us with two people being held back from their lives by their parents. One voluntarily and the other one not. However, both are being pushed what would be best for them. So, can Casey trust that her mother’s sobriety will remain intact without her? Also, will Jin find it in himself to reconcile with his dad and perhaps try to find a way for them to make up for lost time and ill decisions as a parent?

You grow up around something, and it feels like nothing.

Probably not seen: The tear which drops, at the perfect time, while she says this.

Despite John Cho getting first billing, this movie only really benefits Richardson. In it, first and foremost, she is given the gift of not becoming someone’s love interest. She isn’t the naive, barely legal girl to Cho’s, usually played by an older white man, mentor. Does she have chemistry with him, alongside Culkin’s character? Yes. She shows interest, playfulness, and you can imagine her with either.

Yet, instead, they keep her as a grounded equal. They don’t dilute all her character can and does offer by putting her in some supportive girlfriend role. Instead, she is given the ability to seem stubborn, say no to Gabe’s advances and pursues what she wants. OF which, for most of the movie is to connect with Jin over architecture. To the point, you may think she may have an interest in him, beyond conversation and who his father is, but that isn’t the case.

If anything, it pushes you to realize that when a girl takes initiative, seems extroverted and knows how to network, she has to deal with the burden of that mentor seeing something beyond admiration. If not someone to talk to about her passion who, unlike most of her peers, has a serious or feign interest.

But it isn’t just her interactions with Cho and Culkin that make the character, but also the complicated relationship she has with her mother Marie.  In that, she compensates for the fact we don’t get to see Jin and his dad react. She fills in that void and helps show the difficulties of dealing with a parent you feel guilted into taking care of despite the life you have ahead of you. The only difference being, Casey loves her mom to the point of being willing to sacrifice while Jin sees his dad as nothing more than an inconvenience.

It Really Pushes You To Get Into Architecture

Noting further the talents of Richardson, the way she talks about architecture really pushes you to want to read up about the buildings in your neighborhood. The way she makes it sound like buildings, similar to artwork or music, can evoke a feeling, beyond the usual, “I was assaulted or saw a ghost here” I feel could be a spark for someone.

This One Conversation Between Gabe and Casey

Though Culkin doesn’t contribute much, I must note this one conversation that left me thinking a bit. It was between Gabe and Casey and it dealt with how older generations judge attention spans of younger generations. To make a long conversation short, it was how a dad thought his son had a short attention span because his son didn’t enjoy reading but playing video games. Something the dad didn’t have the attention span for. So comes the idea it isn’t about attention but interest and then Gabe, who is a masters graduate, goes deeper into this idea of people not being interested in life.

It is a very odd conversation, as are most of the ones Gabe is in, but it does really make you think a bit and I think was a highlight.

As noted, John Cho sort of inhabits what is usually a creepy older white man. One who seems amazed, in an almost misogynist way, at times, this young girl can be so brilliant. Yet, for some reason, seems to be on such a regular, if not meandering, path. For Cho, things are slightly changed up. Firstly, there is no sexual contact between Jin and Casey. He is accused of liking her by Eleanor but it isn’t solidly confirmed.

Secondly, while Jin is more experienced in life, he isn’t treated as this all-knowing man who brings sparkles into Casey’s eyes. Again, she is basically like his equal and we see them have a healthy back and forth. Cho brings his experience as an actor to Richardson’s talent and they mold so well it makes their often mundane conversations interesting.

Thus setting up for when either say or ask something personal, as weird as it may seem, they figure out a way to make it seem natural. Of which Jin is the one to break the ice by having Casey open up to him and leading to their relationship being more than Casey being this tour guide. This girl trying to get the experience of second-hand brilliance by talking to the son of a famous architect writer or artist.

But, despite Casey and Jin being equals in writing, Cho clearly is the supporting character boosting Richardson. Especially in said moments of vulnerability and pushing Casey to trust her mom and move on with her young life. Which is slightly disappointing solely due to the lack of opportunities we see for John Cho and yet, despite first billing, he gets eclipsed and forced into a supporting role. Even with his character being the one sought after by Casey.

This would have been perfect for if I didn’t think this film was worth seeing.

Columbus is the rare movie in which, despite our two leads not often having the privilege of being the focus of a production often, they have a natural grace about it. Richardson presents the rare example of having what clearly is a building block movie but without you getting the vibe she is experiencing growing pains as an actor. She commands your attention with a diverse performance which deals with a complicated relationship with her mother and with assistance from John Cho, facing the idea that perhaps her mother no longer needs her to be her rock. That the worse is over and Casey can go back to being in a child’s place, focusing on how she will be an independent woman.

Hence the positive label. Columbus is like a wake-up call for casting directors when it comes to Richardson and shows that men like Cho could just as well inhabit the boring older male character as many white men before him. All the while adding a dash of a non-American culture to spice things up a bit.

It Really Pushes You To Get Into Architecture - 85%

This One Conversation Between Gabe and Casey - 90%

Haley Lu Richardson shines in Columbus and proves herself as one of the most underrated actresses in Hollywood.