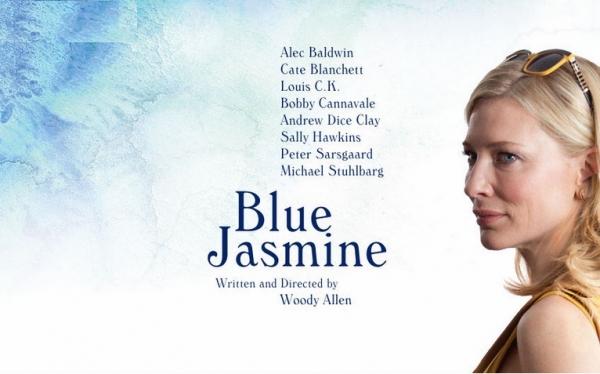 When new money comes up too fast and lands on her ass, you get the story of Blue Jasmine.

In my attempt to at least see the majority of the motion pictures likely to be nominated for acting Oscars, on that list is Blue Jasmine. This Woody Allen picture, featuring Cate Blanchett, Alex Baldwin, Louis C.K., Peter Sarsgaard, and a surprising appearance by Andrew Dice Clay, pretty much is not the type of movie I would usually seek out, but not every last film I see is going to be something I would run to. So, with that said, let’s talk about Blue Jasmine.

The story of Blue Jasmine focuses on Jasmine (played by Cate Blanchett), a former rich man’s wife, who has fallen on hard times since her husband Hal (played by Alec Baldwin), who basically is a slightly more subdued Jorden Belfort type, lost all his money and killed himself. Now, being that Jasmine seems too accustomed to the wealthy life to be able to quickly adapt to the life of the paycheck to paycheck, this causes her quite a bit of mental trauma. But, with the help of her sister Ginger (played by Sally Hawkins) there is an attempt to adjust to what is now her new life.

Perhaps the thing I liked the most about the film was the soundtrack. Though Woody Allen may not be that consistent when it comes to his movies, the accompanying soundtracks are always superb. As for the story and performance, admittedly I liked the idea of seeing the woman who was attached to the man who became rich off the backs of the poor, and I must admit I did find Andrew Dice Clay to be a decent actor in this film, and everyone else was adequate.

But in all honesty, this film just doesn’t have a real appeal to me. Maybe it is because I’m more for films which seek to entertain you by being funny, romantic, or having really good drama, rather than a film which seem so melodramatic that you aren’t sure if Blanchett’s Jasmine is supposed to be a parody or a real person. Perhaps though, the real issue, is that I found it impossible to connect with most of the characters. None really had the type of qualities which compensated for their faults and though there is a story there, I am not a fan of when the narrative intercuts the past and present. It usually comes off jumbled, and unfortunately seeing Jasmine’s life when she was rich only makes you glad to see her struggle when she ends up poor. Making it so, perhaps Blanchett should get praised for portraying an utterly unlikable character.

Unless you are a Woody Allen fan, I don’t see the point in watching this movie. I would say this is the type of film that perhaps movie purist go to because it surely isn’t made to appeal to a mainstream audience, in my opinion, and I realize I’m saying this about a film which made over $70 million dollars. But, to me, outside of being possible Oscar Bait, since seemingly watching the rich rise and fall seems to be a popular topic this year, I am not even sure what the overall goal of telling this story was? For though the story of a woman who lost it all because of her husband is interesting, the execution seemed so satirical, it almost seemed personal. Making it so, overall, I say to skip this.