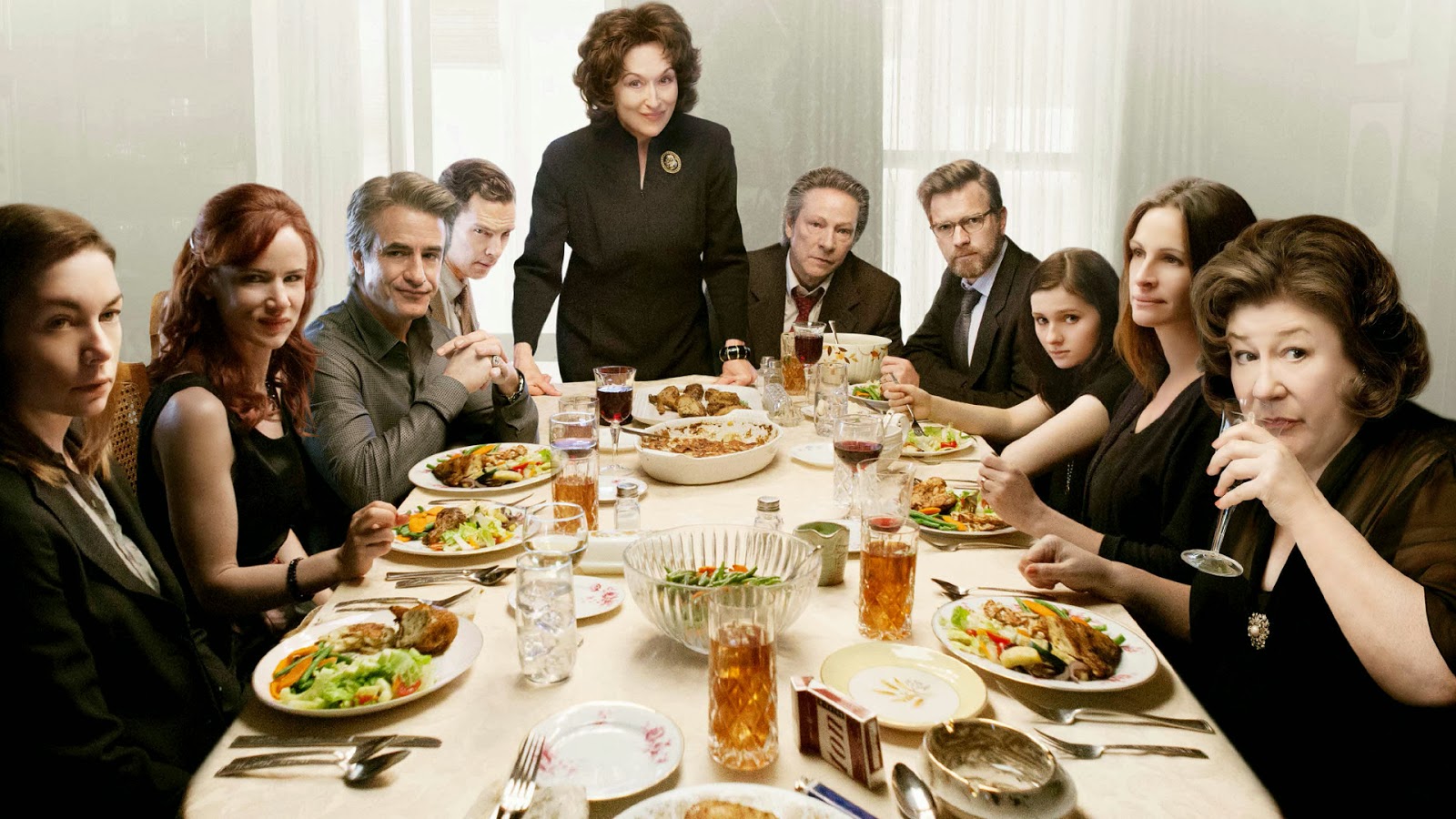 If a soap opera was given a movie after being canceled, it would be something like August: Osage County.

Just the name of the cast is what should easily draw you to the film. You have Meryl Streep, who even in that movie with Roseanne was good; Ewan McGregor, who is pretty consistent; and alongside them you have Julia Roberts; Chris Cooper; little Abigail Breslin, who ain’t so little no more; and then you have Juliette Lewis; Benedict Cumberbatch; and Julianne Nicholson, who plays Dr. DePaul on Masters of Sex.

For those unfamiliar with the play, the basis of the movie is that this Oklahoma family comes together after the patriarch of the family, Beverly (played by Sam Shepard), dies. With his death, the family is brought together and this leads to a lot of arguments and secrets coming out. Most of the film focuses on the issues of, and between, the matriarch Violet (played by Meryl Streep) and her daughter Barbara (played by Julia Roberts). The others in the film get to occasionally jump in and go at it with these two, while sometimes getting some dialog in about what is happening in their own lives.

As you can expect, the praise for the film definitely goes to Meryl Streep, though admittedly I feel the main reason she is deserving of praise is because when you compare Violet to Streep’s other roles, Violet stands out due to her not being the type of character which calls for tight control of your emotions and actions. Violet is loose and vulgar, and Streep being in a character which cares nothing about poise is refreshing. Same goes for Julia Roberts who curses and can be as nasty, if not nastier, than Streep sometimes is with her character.

And really, though the overall story seemed a bit condensed, rushed, and so much like a soap opera summed up into 2 hours, it really does keep you attentive. Between the arguments between Barbara and everyone; mixed in with a decent amount of family drama, including a family secret, you won’t end up bored.

But, at the same time, I think I should note that both Streep and Robert’s performances are a double-edged sword. For while it is interesting to watch both of these actresses, who usually don’t pick these type of women to portray, their performances feel more like cathartic releases more than the type of performances meant to make you get lost in their characters or even make you feel something. And the reason I say this is because it seems both Barbara and Violet pretty much argue with each other, or the cast, until exhaustion, and then someone gets to interject and talk about their character’s life, and then it is back to being about Barbara or Violet. Which, you can understand to a point since Roberts and Streep are the two money making names of the film, but after a certain point I felt like they are being focused on too much and that no one else is being allowed to try to connect to the audience at all. In fact, I’d say the film stripped the emotional complexities of these characters, who have gone through abuse, being cheated on and etc., and all that is left to see is 2 hours of the type of mindless drama which seems written no better than your general daytime soap opera, but it benefits from having a more seasoned cast.

Streep remains good but, despite this character change, it doesn’t shake you up and make you think she is topping herself at all. She is simply working, and due to her work being better than most, what is average for her seems superb in comparison to her fellow actresses. As for the rest of the cast, while it is nice to see Roberts play a more vulgar character, she is forgetful in the long run and everyone else pretty much plays second fiddle to the lives of these two actresses’ characters. Thus making the film only worth TV viewing. For while the drama is interesting, it doesn’t create any emotional connection and really is just soap opera drama put into a 2-hour movie of which sometimes it feels like the attempt to give everyone a backstory leads to no one being particularly interesting or well done.