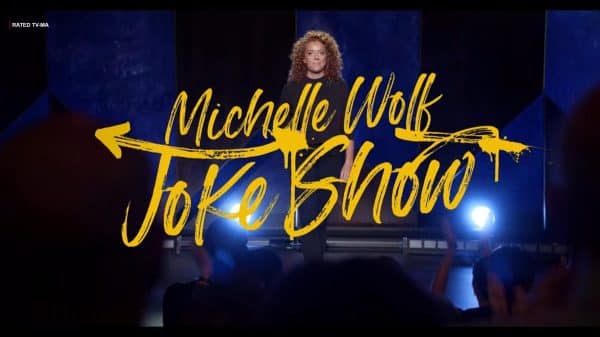 In Joke Show, Wolf reminds you, while Netflix may have canceled her show, it wasn’t because she wasn’t funny but the format didn’t work.

The heart of Michelle Wolf’s latest taping deals with her opinions on being a woman, a white woman specifically, and feminism. Be it in the form of wishing women didn’t use euphemism and make things like having a period or childbirth cute, to sometimes recognizing equality means being forceful. Also, she brings up her feelings on playing God, or the creation of men, women, gays, and lesbians, as well as the sizes of penises. Because there is a need to talk about sizes, finding what fits, and making sure people know, as vulgar as people think she is, male comics are much worse.

We get mad before we get logical.
— Michelle Wolf

What you have to admire about Michelle Wolf is that you can’t quickly and easily compare her to any comedian, male, female, or trans. Wolf brings the kind of observational comedy that the women who usually get stand up tapings don’t do, so it makes it appear she carves her own lane. For example, how she jokes about rape and abortion isn’t something you can imagine someone else coming up with and pulling off.

Heck, even when she talks about feminism, the way she embraces her voice to make her point and tell jokes allows her this weird place that isn’t her being one of the guys, but she isn’t necessarily a girl’s girl either. She is a woman, isn’t trying to perform or talk like her male peers, but she does want the same freedom to criticize society, especially the parts she has to deal with.

Another example: Penises. As a heterosexual woman, she likes a good dick every now and then, and that comes with dealing with men and recognizing the side effects. Some of which she makes light of, by referring to men as idiots, but sex with men isn’t the sole thing she focuses on and, unlike many of her peers, she doesn’t make it appear she needs to be drunk to the point of passing out to have sex with them.

Mind you, is she living her best life? Maybe not. However, she can talk about other things like how women need to recognize certain differences between men and women to gain equality. But, also there is a need to recognize how they aren’t necessarily created equal. For as the quote above states, “We get mad before we get logical,” and that is what is refreshing about Wolf. Is she mad? Does she get upset about cancel culture, double standards, and having to get a period? Yes. But while she recognizes she has a shrill sounding voice, never does it seem she is trying to make you think a bit rather than rant and rave, and take advantage of people who already paid to see her and can’t get a refund.

One of the reasons we continue to look for projects from Michelle Wolf is she is an outlier in the best way. She doesn’t tell blackout drunk sex stories, isn’t that self-deprecating, and doesn’t necessarily have a shtick. At best, or worst, she recognizes her voice will get your attention and make her memorable, so she doesn’t have to amp up some part of her or a joke that gets a reaction. Thus allowing her to just do her think.

Despite a mostly positive review, I’m not going to pretend this is something to re-watch. Wolf makes interesting observations, some of which I don’t think the average person may come up with, but it is a one and done taping that doesn’t have jokes or moments that need to be repeated.

Joke Show reminds you that Michelle Wolf is still one of the top comedians out there, and while her show crashed and burned, it was more due to her trying to conform to established methods than her talent. A talent that is on full display in this, and while she doesn’t create a taping worthy of being called a special, it is still an entertaining hour that proves that the end of The Break was a mercy kill so Wolf could move on to greater things.