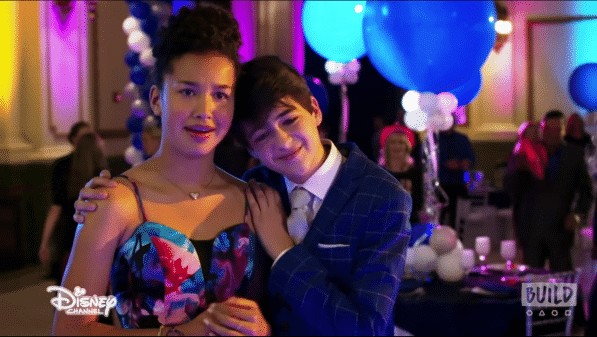 To begin, as most already know, Season 3 has been confirmed and it is a good thing too. According to Sofia Wylie, season 2, which wrapped within the last week, will end on a cliffhanger. Also, just in case you were wondering, the hour episode featuring Cyrus’ Bar Mitzvah is not the season finale. From the way Wylie speaks, we got quite a few episodes to go.

Speaking of a few episodes to go, fun fact, it takes 8 months for an entire season to be shot of Andi Mack. Something which is kind of unfortunate for the young stars since, on top of them mostly being from California, with the exception of Wylie who is from Arizona, meaning the cold weather takes getting used to, it seems most of them don’t have their families with them in Utah. Instead, it is to be assumed that between Bowden listening out, and I’m sure another adult, they basically are expected to be on their best behavior.

Though, on set, being on their best behavior isn’t always guaranteed. Not in the sense that these kids are being bad or anything. More so, perhaps thanks to Bowden’s influence, they like to improvise a lot. Take for instance the “Who Wants Pizza?” line. That was Bowden doing improv. In fact, according to many of the cast members, be it improv or just talking to writers or creator Terry Minsky, they are allowed a huge amount of input into the show.

Take for instance the Bar Mitzvah episode. That all came from Rush bringing it up, and pushing the idea. In fact, right before cast, he had his own Bar Mitzvah in Israel and seemingly he acted as a consultant of sorts on how the show should handle it. Though, he also added some things that weren’t in his, like being lifted up in a chair and there being much more dancing. But, it seems he wasn’t alone in advising what perhaps should happen. Fun fact, his actual mother will play his stepmom and his aunt will also be in the episode.

As for other things the episode will bring, it will be best to prepare for another sweet CeCe and Bex moment, and Lee hints that while we get some answers to old questions, new questions will arise. That is, alongside new characters so that boy we saw in the previews, seemingly he won’t be here today and gone tomorrow. Now, as for whether we may see Marty, sadly no one talks about that and the clip in the video doesn’t show him.

But, there still should be hope! However, whether or not the hope will be justified we’ll find out Friday, February 23rd at 8 PM (EST).