The Awesome Adventures of Captain Spirit – Recap/ Review (with Spoilers)

Despite being a free episode, The Awesome Adventures of Captain Spirit is probably the best bit of marketing you’ll ever play.

10-year-old Chris lives kind of isolated right now. After his mom’s death, he and his dad had to move across town into a trailer. Not just because of his mom’s death, but primarily because Chris’ dad, Charles, drinks a lot to deal with it. So, to kind of shield himself from all that, Chris digs deep into his imagination and becomes Captain spirit! Fighter of a beast named after the intersection his mom died at.

Part of the reason my time is less than others, who got two hours, is because I made decisions that progressed the story. Particularly using the car keys and playing in the car activities one, I believe, and the other is talking to Chris’ dad. So when you play, know that presents a sort of cut off.

It’s The Perfect Bait and Switch I honestly was expecting some silly kids game and, to a certain point, you get that. You dress up Chris as you want, we see him use his imagination to play with his toys, and you can do mundane things like clean about the house. Which helps when Mrs. Reynolds visits. However, then we talk with Charles about your mom, Emily, who you can snoop around and learn about, and then things get less kid friendly and more Life Is Strange style.

Especially as you learn she is dead, likely it is because of something she was doing for Chris, and that she is Chris’ inspiration for drawing. Much less, the only reason she ended up a Kindergarten teacher is because, while she was going to go to college for art, then she got pregnant. Which kind of led her to begin the process of living vicariously through her son. 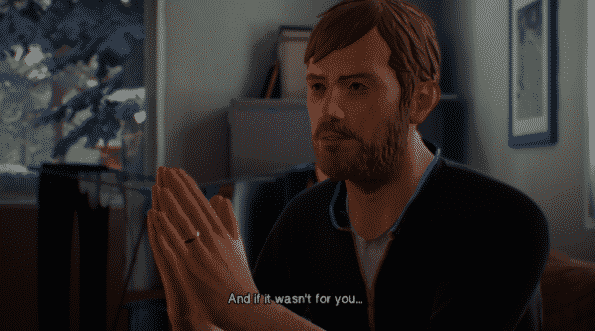 Charles (Nick Apostolides): And if it wasn’t for you…

Diggin a bit deeper into the bait and switch, one of the first things which will catch you off guard is that Charles, subtly, admits to bruising Chris – likely when he was drunk. And with that, you further understand why Chris is so deep into superheroes. It isn’t just because he is about 10 and that is what 10-year-olds do. It could very well be, similar to Hide and Seek

, I believe, there is a separation between Charles and dad. Thus giving birth to Chris’ villain.

Which, as seen by Mrs. Reynolds popping over, as much as Chris may say or think no one sees these bruises, that may not be the case. The town knows, even Chris’ grandparents, that Charles is a drunk. Even openly blames Chris for Emily’s death and it seems child protective services may get involved. So, you have to really take note of how Emily’s death is handled by both and how Chris is starting to disassociate from certain things and elements in his life.

Not that I was a psych major in college, I took like one or two classes, but there is unquestionably some interesting depth here.

First of all, it is free – that alone ups the reason to play this. Second of all, it is a free game which doesn’t feel like a demo but a good entryway for those who may not be familiar with the Life is Strange universe. It presents this, “Oh, this is just a simple story about some kid” storyline, but then progresses into something a bit darker and quite surprising.

Then, for those already fans of the series, it makes a good snack until Life is Strange 2 is released September 27th. For, with it being noted that decisions in this game, somehow, will affect the sequel, it helps you get back into the mindset of the universe. Much less, prep your emotions with seeing how this episode 0 sets you up.

Thus leading to why the positive label. While no tears might be shed, you will become emotionally invested in little Chris’ life. Also, a dash bit worried about him since clearly his father is on a downward spiral and Chris’ loyalty to his dad might mean he may head down the rabbit hole with him – until another adult gets involved. Making it so, it is hard to not be invested in what happens next and want to pre-order asap.

Check Out Other Video Game Reviews

Such As These Similar Games

Life Is Strange: Before The Storm

This is something I checked out due to it being free, I was unfamiliar with the “Life Is Strange” games and didn’t make the connection till I had finished this game…

The premise reminded me a lot of the 1990s film by Richard Donner (“The Goonies”) called “Radio Flyer” – which starred a very young Elijah Wood and Joseph Mazzelo as two brothers who retreat into a world of imagination in order to cope with the abuse of their alcoholic stepfather (Adam Baldwin).

Given this game’s status as a promotional tool, I was amazed at the amount of detail that went into small things like the child’s drawings and the songs that play at key moments in the game. “Captain Spirit” is certainly something I’d want to get someone to sit down and play if they weren’t convinced that video games are a form of art.