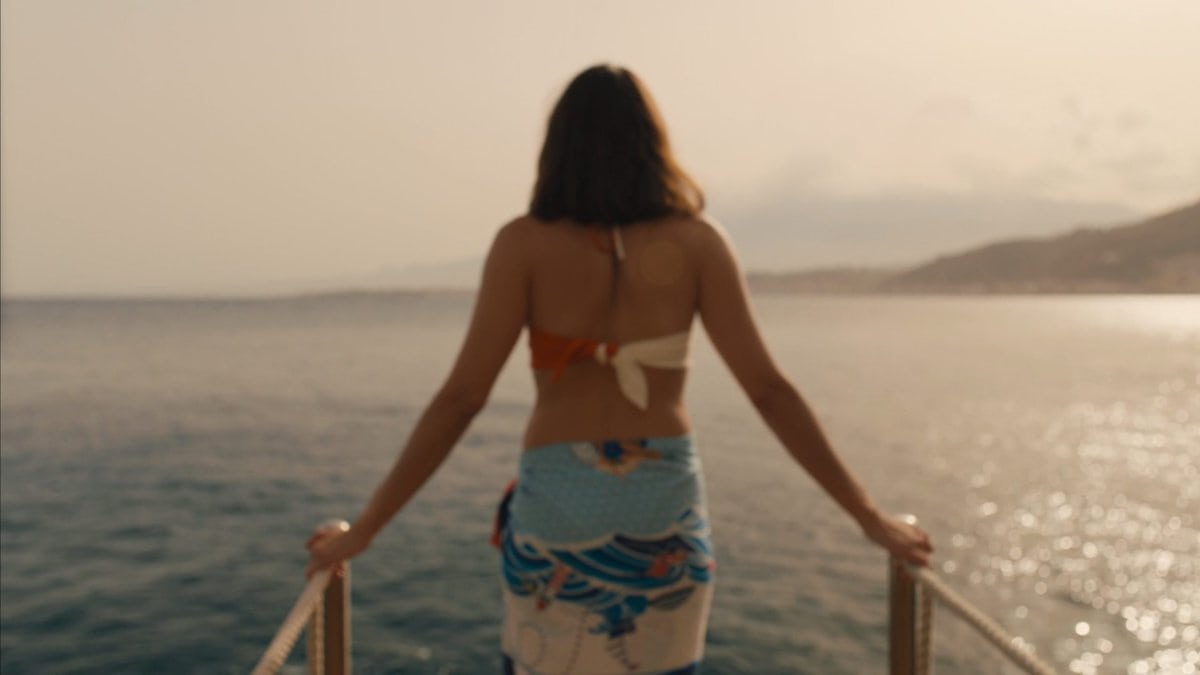 "Harper looking out towards the ocean while distraught," The White Lotus, "In The Sandbox," directed by Mike White, 2022, (HBO)

Lucia and Mia begin to integrate more with the Americans, as Portia and Tonya find just what they need, and Harper discovers something which has her questioning everything.

With all Daphne has said about Cameron, it makes Harper coming back into the room a bit awkward. Ethan was slow to pick up her calls; he seems rather out of it, and she thinks the worse with finding a condom in the coach. And with thinking Ethan did something, it puts a dark cloud over her head. She was excited that Daphne and Cameron weren’t as perfect as they seemed, but now she has to wonder if money changed Ethan or if he took the opportunity to cheat and is now willingly lying about it.

Because, mind you, she gives him a chance to say something, but all he conveys is knowing now Cameron definitely invited him and Harper on this trip to invest.

We Deserve To Have Fun – Tanya, Quentin, Jack, Portia

Greg is gone, and it seems Tanya will be a mopey mess until he returns, and Portia will have to suffer. That is until a gay man named Quentin, with his multiple friends, recruits Portia and Tanya, and shows them a fun time. One that allows Tanya to make a friend she can tell her life story to, and as for Portia? She meets Jack, who is the kind of guy she was looking for since he gets a rise out of her, and she hopes to get a rise out of him.

Speaking of erections, after all that has happened and was exhibited by Lucia, Mia decides to just have sex with Giuseppe in hopes he’ll be true to his word and help her career. The problem is that he can’t get it up, and Lucia is too distracted to help her find Viagra.

Now, what is distracting Lucia? Albie. Someone who she seemingly takes an interest in, as Portia diverts her attention to Jack. Now, why does she do this? It’s hard to tell. It doesn’t seem it is to make Dominic jealous or potentially coerce money out of him. She may actually like Albie since he is nice, listens, and might be of a different pace than what she is used to.

But, not to be outdone, Valentina may have slowly begun to make a move on Isabella. Nothing like Armand, who wasn’t subtle but with a token of appreciation, you’re left to wonder if the way Valentina treats men who approach her or work with her, the way she does, is because she prefers to interact with women? Not just at work but in life.

Either way, there are many happy people that night with Lucia and Albie hooking up, Portia and Jack, and it seems Mia nearly killed Giuseppe, so she might be able to take his job.

The Italians Had Their Profile Raised

The Italians have, thus far, felt like props or necessary components for how can you have a show set in Italy and make it solely about Americans? But, while an obligation before, we’re starting to see notable moves to make the Italians matter.

Lucia is the one who benefits the most as she goes from happy go lucky sex worker to someone who seems to want to settle down. Not necessarily with Albie, or any man, but wants to find another line of work or open up a shop and live a more normal life. And as she does this, Mia is ready to do as Lucia has done and exchange sex for things she wants, which is an interesting development.

Lastly, there is Valentina, who still is very mysterious and underdeveloped, but with her buying a gift for Isabella, there is cause to wonder if we should read more into this? Could it be there will be a pattern of the White Lotus’ manager being queer and preying on one of their employees?

The Question of Who Died And Who Killed Them Rises

Who ended up face down in the ocean wasn’t something pushed to the forefront until now. For with Harper believing Ethan may have cheated on her, that’s one suspect. Mia could end up face down if Giuseppe thought she tried to kill him to take his job and who is to say he didn’t go after her and she killed him? Then with Lucia, being that she had sex with Cameron and Dominic and gave head to Albie, who is to say someone won’t get mad or jealous and kill her? If not, again, in the act of self-defense, her kill someone?

Increasingly there are reasons to take note of what people say and their reactions, and while I don’t foresee the death being pre-meditated, that makes each and every action matter all the more.

Wanting The Best For Albie And Portia

While Portia curving Albie hurt to watch, and Albie trying to make Portia jealous was childish, it is hard to paint either as a villain and not want them both to be happy. Portia has a lot to deal with, regarding Tanya, and her own personal life seems to be in shambles. Then with Albie, he is the worst kind of nice guy. He is a bit of a pushover, maybe a tad naïve, and doesn’t seem to take well to rejection.

But, between Portia finding what she wanted in Jack and, who knows, maybe Lucia being able to provide Albie the kind of romance he seemed to want with Portia, could they both get a happy ending (no pun intended)?

Tanya Seeming Happy For Once

What makes the introduction of Quentin and his friends so special is that it led to the first time we saw Tanya happy without someone wanting something from her, making plans with her money, or it being about a potential romantic relationship. She was just able to laugh, drink, and talk, and it leaves you to wonder why she doesn’t surround herself with gay men most of the time? Clearly they create her happy place and remove the dark cloud usually over her head.

Too Many Characters To Handle At Once?

One of the things we’re wondering about, with the rise of the Italian characters, is if maybe this show is bloated? Is juggling so many characters, who aren’t really that connected, why Mike White has to put some on ice in order to focus on others? Which, admittedly, is leaving multiple characters a bit lackluster. Valentina pales in comparison to Armand, as do all of the White Lotus staff. Dominic and Bert don’t bring much of a draw, and even Tanya feels a bit stunted, if not a rehash of what we saw before, but in a new location.

So with a season 3 renewal, here is hoping that maybe the cast isn’t as large or else the personalities become more notable, beyond a handful of one-liners.

The White Lotus: Season 2/ Episode 4 – Recap/ Review (with Spoilers)
Overall
While the Italians finally start to get some much-needed focus and development, there is the need to question whether the show can handle the amount of talent it has equally, as it taps into established stars and tries to build up new ones.
Community Rating0 Votes
0
Highlights
Tanya Seeming Happy For Once
Wanting The Best For Albie And Portia
The Question of Who Died And Who Killed Them Rises
The Italians Had Their Profile Raised
Disputable
Too Many Characters To Handle At Once?
80
Subscribe to our mailing list Follow Wherever I Look on Twitter and Instagram, Like us on Facebook, and Subscribe to the YouTube Channel.