In what begins as a rather perplexing season finale, when it all ends, so much makes sense about Amalia True – if that’s her real name.

Table of Contents show
1 Recap
1.1 Back To The Future, Or Rather The Past? – Zephyr, Harriet
1.2 The Original Amalia True – Amalia
1.3 Back To Where We Left Off – Amalia, Dr. Cousens, Sarah (Maladie), Dr. Hague. Lavinia, Penance
1.4 Things To Note | Question(s) Left Unanswered
1.5 Collected Quote(s) & .Gifs
2 Commentary/ Review
2.1 Once You Get The Full Episode, You See The Brilliance Of It
2.2 The Nevers Directory

Back To The Future, Or Rather The Past? – Zephyr, Harriet

The episode begins with us seeing a future in which the only person who may look familiar is Harriet, who is going by the title “Knitter,” since names are sacred and not just given to anyone. In this future, there is the Planetary Defense Coalition, which seems to be made of members of the Touched, or those who support or worship the Galanthi. Their opposition are the Freelife, who seek to destroy the Galanthi and their followers.

For the most part, there is a lot of confusion since there is no easing into the future world. We just know there is a war, and somehow Harriet made it this far, but she isn’t showing any signs of her ice power, so perhaps this is a descendent vs. the Harriet we know? Either way, the war has been long and taxing, and at this point, it is assumed there might be one site left with a Galanthi, after 20 sites have been destroyed.

At this last remaining site, there is Harriet and the group of Planetary Defense Coalition members she is with, and a woman she encountered named Zephyr. She is someone very jaded, might be addicted to drugs, but that’s because of a long life, seeing and causing a lot of death, and aging not being easy. But between Zephyr and Harriet, a bond forms. At least until the captured Freelifer tricks one of the young members of the Planetary Defense Coalition, and there is a massacre.

One in which only the Galanthi that was being held at the base seems to survive, and with them touching Zephyr, she gets to see another day.

As you may remember, Amalia tried to kill herself before becoming Touched, but there is a lot to add to her story. In “True,” we see what led up to her suicide, as well as what happened between her suicide and her meeting Penance.

In terms of the before, Amalia was a baker with a simple life and very demure. The fighter we have come to know and love didn’t exist then. Which is perhaps why Amalia was so unhappy. She married a man assuming he’d provide her stability, but with his death, she only got a mother-in-law who wouldn’t die and being left nothing due to her husband’s debt. Also, with being bumped at her job in favor of the owner’s daughter, she only had the work of making deliveries to sketchy parts of town. Add in the man who fancied her, but she didn’t marry, ending up rich, with a wife who could get pregnant, and her seeing the life she could have had, she was miserable. Hence her jumping in the Thames, hoping to die.

Back To Where We Left Off – Amalia, Dr. Cousens, Sarah (Maladie), Dr. Hague. Lavinia, Penance

However, she didn’t die, technically. You see, the Amalia from before, the baker girl? She did die, but it seems the Galanthi brought Zephyr from the future and dropped her into Amalia’s body. So between attempting suicide and being a member of the Touched, Amalia is committed, and that is where she meets Sarah, Dr. Cousens, and begins to have a relationship with both.

In terms of Sarah, it is a relationship based on Amalia, Zephyr, knowing Sarah isn’t all the way crazy. However, with knowing she is living in times where she can’t outright agree with Sarah, she throws Sarah to the wolves, like Dr. Hague. Though, to make Sarah’s situation worse, Amalia even encourages Sarah to talk about everything that evolves into Maladie’s manifesto.

But, with playing the long game, Amalia bides her time by becoming a maternal figure to the other Touched and enjoying her affair with Dr. Cousens, who acts as a confidant to some of Amalia’s truth in terms of the future that is to come. Mind you, there is no mention of a wife at the time, but Black/White relations are noted, reminding you that we are in the late 1800s/1900s.

Though with having an Eliza Doolittle period, thanks to a member of the asylum teaching her to speak like an English lady rather than a soldier from southern Canada, Amalia eventually gets her freedom courtesy of Lavinia. Thus we see how those two met and what led to Lavinia giving someone like Amalia an orphanage to run.

Which leads us to where we left off in episode 5, as we watch Amalia’s team try to rescue the Galanthi but ultimately, that doesn’t come to past. Rather, it seems looking at the orb the Galanthi is in inspires Amalia to invest more into Penance and tell her the whole truth. For, in the long run, it seems the reason Amalia might have been brought back is to protect and nurture Penance.

[…] “this close” is where we always end up. It’s where we all fold. “This close” change is too scary, even for the people who fight for it.
— Stripe

Nothing will crack this world harder than one gentle question.
— Knitter

Once You Get The Full Episode, You See The Brilliance Of It

I can’t tell you how many times I checked my timeline bar just to make sure I didn’t accidentally pick the wrong show to watch. For when you see the beginning of the episode, while the name “Galanthi” is familiar and makes you believe you did pick the right show, everything else is so sci-fi and not connected to what we’ve seen thus far, it’s discombobulating.

However, as you see Amalia before becoming Touched, and then once Zephyr takes over, you realize you watched one of the most elaborate back story episodes. One which helps explain why Amalia always had the name we’d use for Penance’s inventions. Also, it answered how and why Amalia, who is a fighter, somehow lived to adulthood, never mind how she went from someone giving up on life to fighting for the lives of others.

Add in how Molly came to be, alongside Amalia’s relationship with Sarah, and it all makes for perhaps one of the best season finales we’ve seen in a while. Granted, it doesn’t necessarily hype us up for season 2, even if Zephyr reveals her truth to everyone. However, it does give us an idea of what’s to come in season 2 or, if HBO keeps this whole “Part 1” thing up, part 2 of season 1. 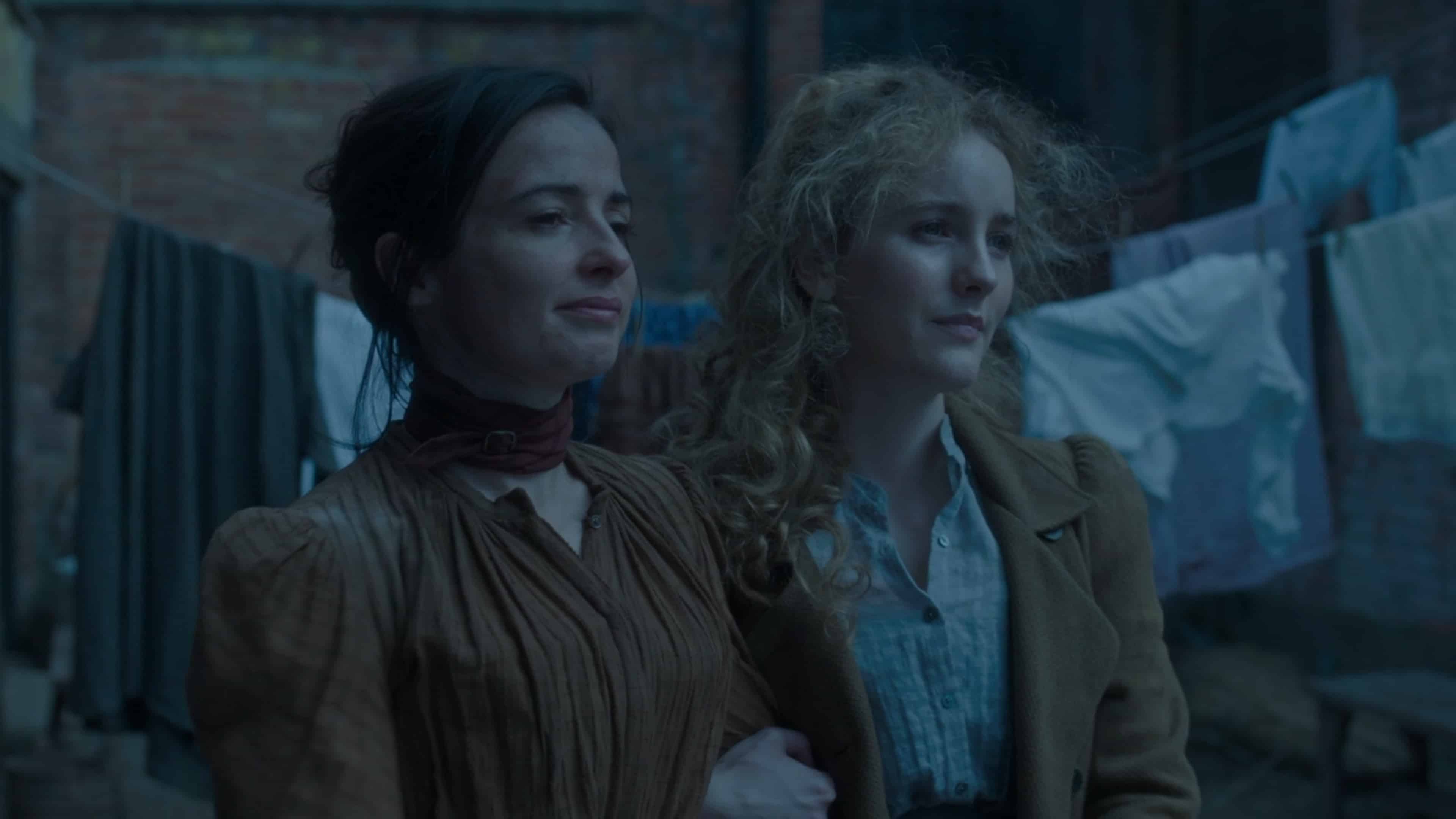 The Nevers: Season 1/ Episode 6 – Recap/ Review (with Spoilers)
Trajectory: Climbing
This was one of the most interesting episodes of what was a rather ho-hum show at times, even with so many characters having powers.
Community Rating1 Vote
81
Highlights
Once You Get The Full Episode, You See The Brilliance Of It
On The Fence
84
Follow Wherever I Look on Twitter and Instagram, Like us on Facebook, and Subscribe to the YouTube Channel.