The Marvelous Mrs. Maisel: Season 4/ Episode 8 “How Do You Get To Carnegie Hall?” – Recap/ Review (with Spoilers) 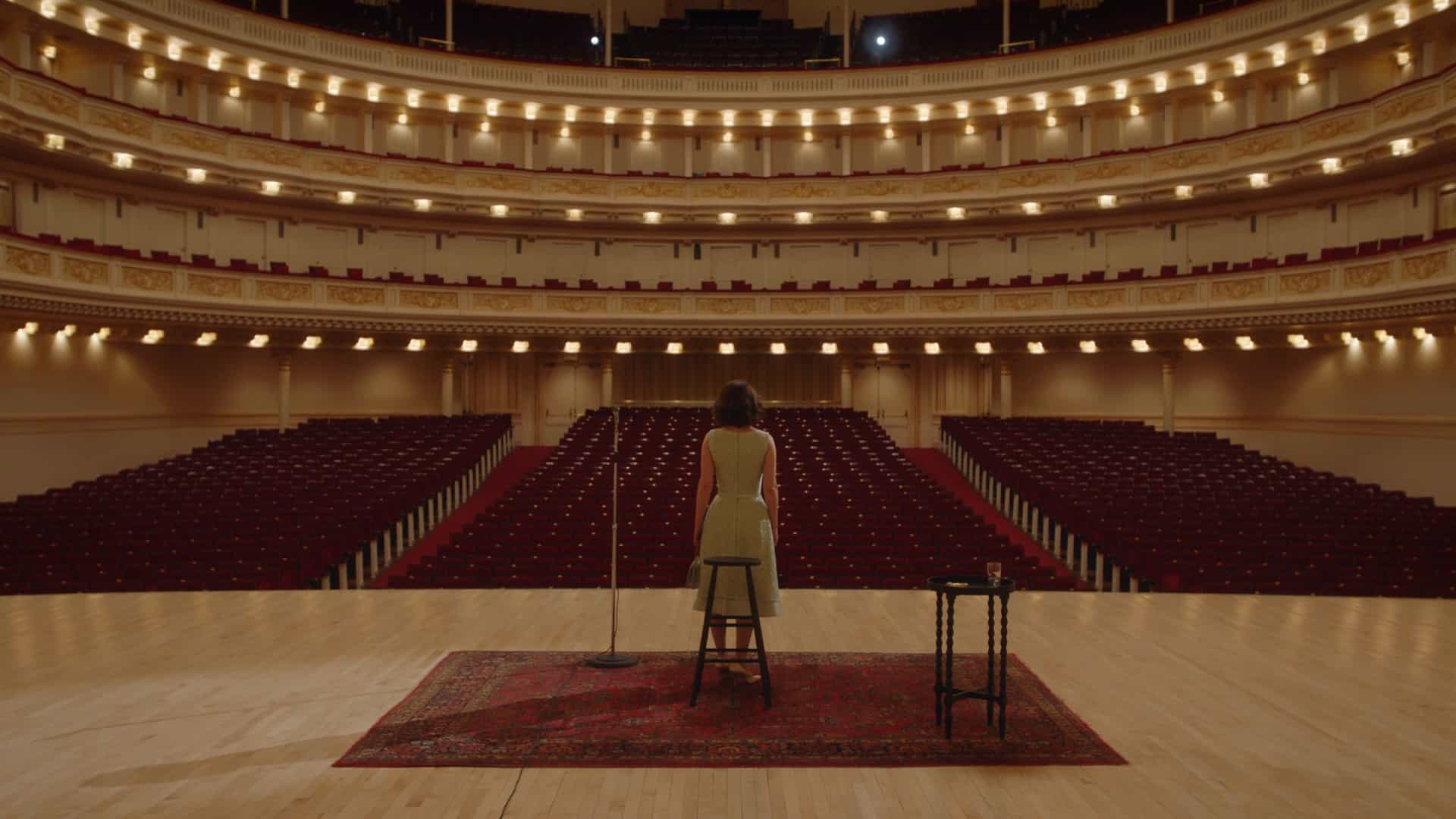 In the season finale of The Marvelous Mrs. Maisel’s penultimate season, Miriam is given a serious reality check about her career, mortality, and relationships. 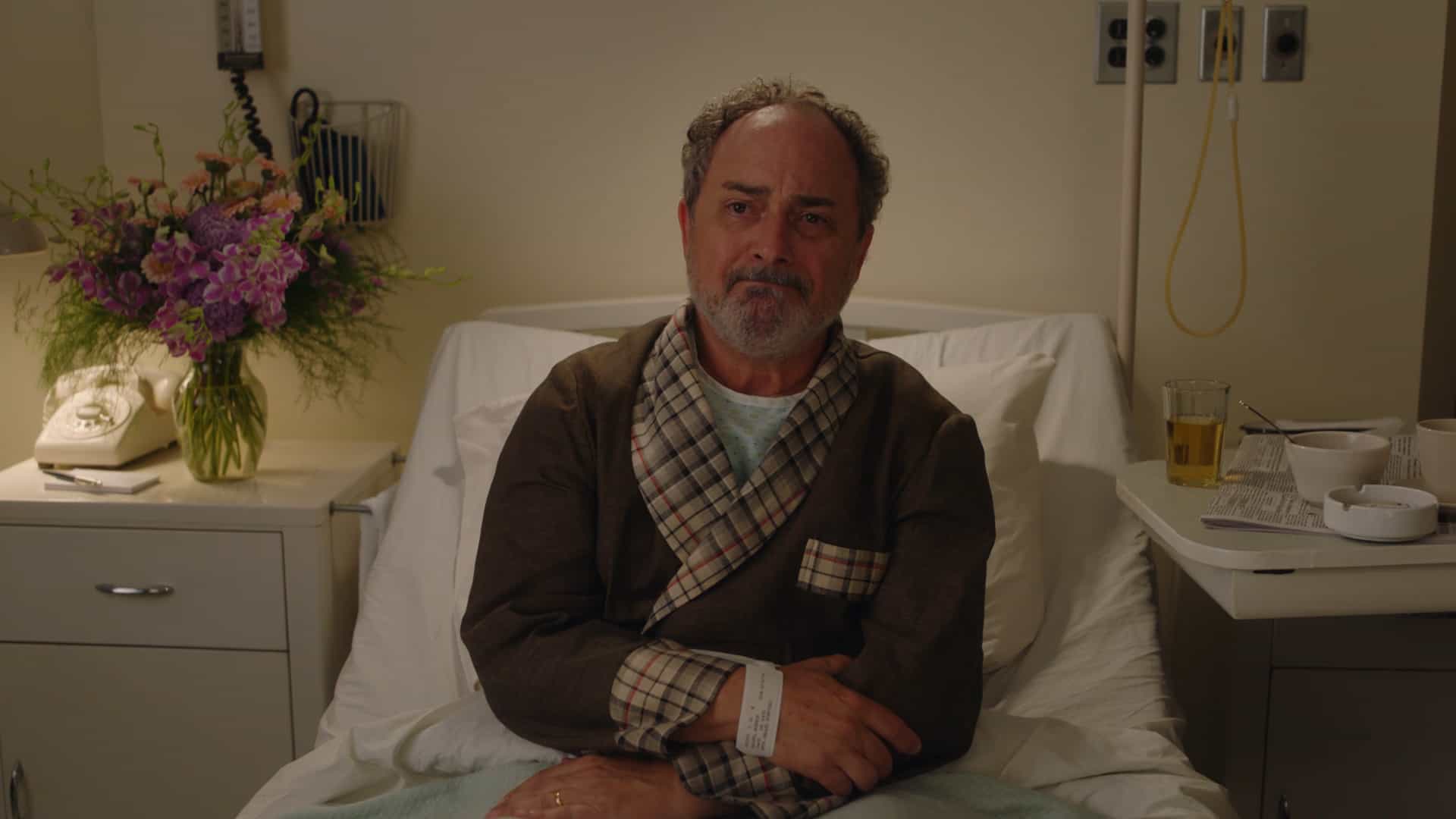 For a good bit, Moishe seemed like he was going to die, and a lot of people wanted to take the blame. However, in the end, Moishe makes it clear even Joel’s reveal about Mei being Chinese and pregnant wasn’t the reason. Now, he does say that Mei needs to convert, but that’s a whole other thing. What matters is, divorced or not, the family came together in support of Shirley, Abe was ready to write an obituary, Mei even was there to distract Shirley with Mah-Jong – while pretending to be a hospital worker.

Heck, another plus here is it seems to push Abe beyond his insecurities about Rose’s past and her flirting. For now, he realizes what life would be like without her. Miriam even, who has been trying to take dating and life less seriously, even has a bit of a shift in her life. For with being called to work, since everyone comes to see her, she thinks about the power of women and how men might be at the forefront, handling the short term duties, while women handle the long term stuff. The things which require more than a signature, a nod, but take time and long-term effort.

Which, in a way, describes her relationship with Lenny Bruce. The man soon to play Carnegie arrives not too long before the Wolford is raided, and he shares his praise and notes he is getting Miriam a Tony Bennett gig. Thus making this long-term relationship, one that has seen Miriam in a cell because of this man, picking him up from jail or off the street, a blessing. Heck, the two even have sex, and perhaps for the first time in a long time, Miriam was able to enjoy herself without needing to question what could or should be next. Despite Lenny coming through with that Tony Bennett gig, Miriam rejects it because it is an opening act gig. This infuriates Susie, alongside Miriam asking questions about Frank and Nicky and why they are hanging around so much? But while Susie is pissed, Lenny might be feeling far angrier than that.

You see, his gig at Carnegie goes well, but he also realized his five minutes could be up at any moment, so getting Miriam this gig was about trying to pass the ball so as the legend fades away, the new kid can become the star. However, she decided to pass the ball to someone else, and he is confused as to why? The Shy thing seemingly has blown over at this point, so what’s the problem?

Well, it is her. She’d rather be able to do her act the way she wants at some illegal strip joint and risk being arrested than modify her act continually for consistent money. In Miriam’s mind, Lenny should get this, for she sees it as a badge of honor to be yourself on stage and get arrested for it. However, Lenny reminds her that he is a working comic, and every time he gets arrested, it means he can’t work that night or a few nights and that he loses places that could book him.

Also, he reminds her that perception is everything, and while he has commanded a sold-out show at Carnegie today, who is to say he won’t be back to people coming to see him get arrested, not tell jokes, tomorrow? So when it comes to Miriam, the perception she is putting out there is that she doesn’t want to work to Carnegie by opening for bigger names and sometimes dealing with being fired. She wants all the control and power without any clout to lean on.

Frankly, he says everything but Miriam being a privileged princess from the upper part of Manhattan, and in his disappointment of her, for the first time in a long time, someone breaks through to Miriam. She stops looking for a quick comeback or reason to display wit and really think. This leaves us to wonder when the final season starts, will Miriam be willing to take opening gigs again and work her way up, or will she become the comedian who was always on the cusp but never willing to pull the trigger?

Lenny Confronting Miriam’s Privilege & Getting In Her Own Way 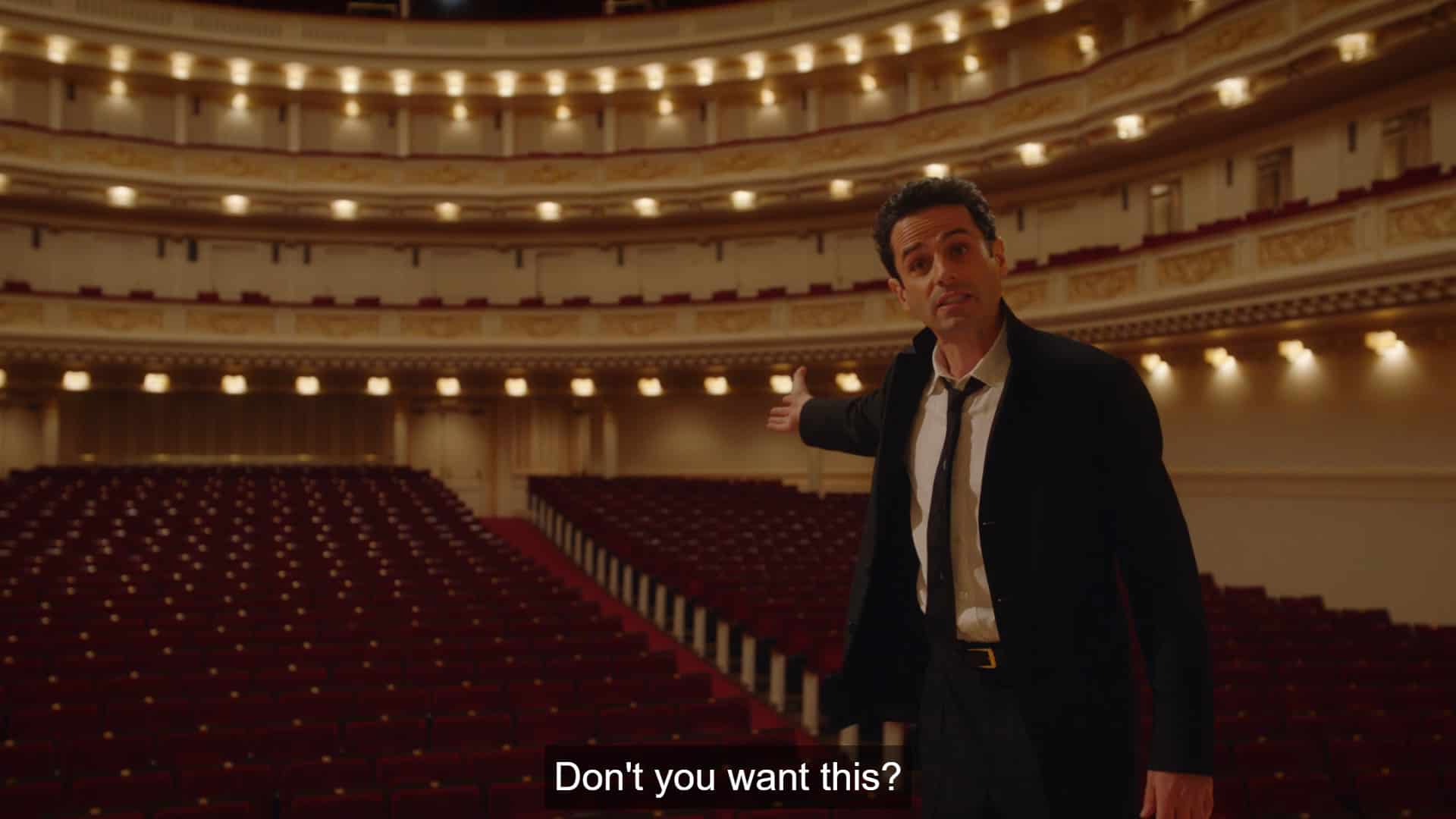 Sometimes it is easy to forget Miriam has grown up with the option to say no. From economic privilege to pretty privilege, she has used both in order to make her way up as a comic. Now, this isn’t to say her privilege isn’t backed by a good work ethic. But there is no denying if Miriam was older, less put together, heck, if she wasn’t a white woman, she wouldn’t have the luxury to say no to opening act jobs or damn near take over someone else’s business for her benefit.

And I think for Lenny, he recognizes that Miriam has the ability to often have a door held open for her and doesn’t have to seek a window or vent like he sometimes has to do. But it is becoming clear less doors are being open for Miriam, and she isn’t seeking alternative ways to get to where she thinks she should be. Which, for Lenny, makes it seem like she isn’t taking this job, this career seriously. What she is doing is a hobby that, yes, is lucrative at times, but if it doesn’t go her way, then she can walk away without much of a loss.

That’s why Lenny mentions perception so much and makes sure that, even with using himself as an example, he tries to push Miriam to reflect on she can be perceived without presenting what could be a personal attack. After all, Miriam is an overthinker, and if Lenny presented any criticism that sounds like it is something someone said, Miriam would focus more on the who than the what. So, relying on her intelligence to guide the way, he seemingly wants to broaden Miriam’s horizon, show her what she is missing on and that, despite the pedestal she puts him on for saying what he wants, there are sacrifices and harder roads he has to take because of it.

This isn’t to say Miriam can’t figure a way. I mean, as a female comic, the path has yet to be paved to get to notable heights. However, in saying that, I think Lenny wanted to make clear the first non-white male to do anything doesn’t have the luxury of doing it the way established. Miriam can’t think so highly of herself, be a woman, and have Susie as a manager and think she is going to get her way. Also, Miriam can’t be so afraid of getting fired that she has to hide away in places like the Wolford, where she can exploit the people there as she has felt exploited.

The entertainment business requires you to take losses and be consistent till you get your big win. Then, from that, you put your people on, put some money away, and prep for when your time in the sun is done due to people growing tired of you, mistakes, or just plain unforeseen circumstances. And overall, Lenny, like Susie, sees Miriam is talented but isn’t playing the game to get ahead but rather stay in the minor leagues. Despite all she claims she wants and is capable of. 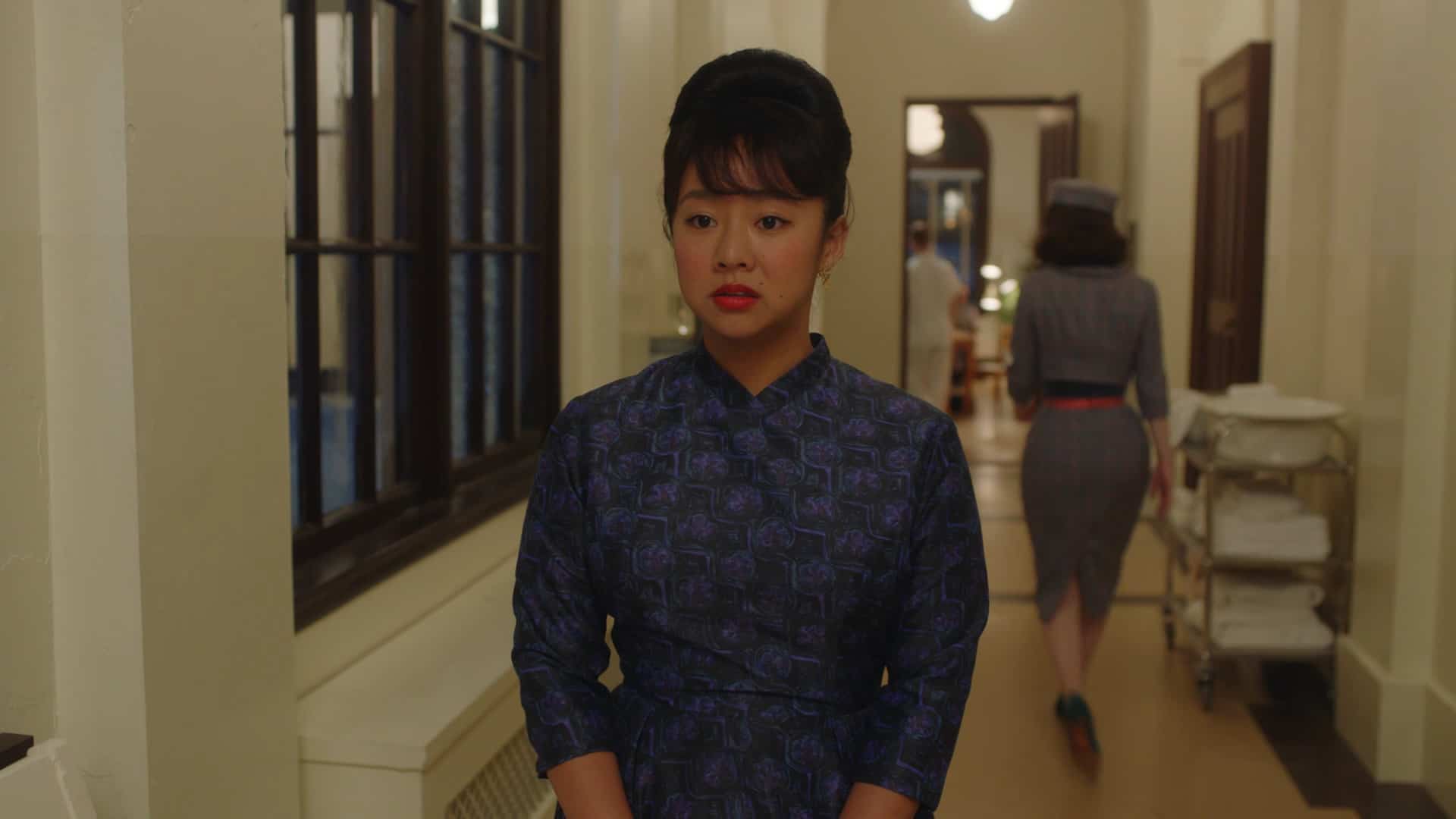 While Moishe said his heart attack wasn’t due to the news of Mei and Joel, that seemed to be more to ease Joel’s guilt than anything else. So with that in mind, holding back from us Shirley finding out and her reaction? That was just cruel. Whether comical or just happy her son found someone, that could have been a major thing.

I mean. For the first time in a long time, if not ever, Shirley was to be made someone you didn’t laugh at or with this episode, but rather someone you felt for. So when it comes to Mei, who helped her take her mind off things, it would have been interesting to see how stuck in the idea of a Jewish girl Shirley is and what said girl looked like? Is it a preference or a prejudice? So much can be done with Shirley’s reaction, and I can only hope whatever it is, Shirley, as a character, is able to do something with it to make her more than Moishe’s often annoying wife.

The Marvelous Mrs. Maisel: Season 4/ Episode 8 “How Do You Get To Carnegie Hall?” – Recap/ Review (with Spoilers)
Overall
As its penultimate season ends, Miriam is forced to realize that everyone is making progress in their lives but her, and it is only her fault. Which will hopefully push her beyond her self-set limitation and have her reach the heights she has long awaited as we approach next season's finale and the series finale as well.
Highlights
Lenny Confronting Miriam's Privilege & Getting In Her Own Way
Disputable
Mei and Joel Still Delaying Shirley Knowing The Truth
80
Subscribe to our mailing list Follow Wherever I Look on Twitter and Instagram, Like us on Facebook, and Subscribe to the YouTube Channel.