Wherever I Look
Recaps, Reviews, and So Much More
Home TV Series The Marvelous Mrs. Maisel: Season 1/ Episode 4 “The Disappointment of the Dionne Quintuplets” – Recap/ Review (with Spoilers)
TV Series

The Marvelous Mrs. Maisel: Season 1/ Episode 4 “The Disappointment of the Dionne Quintuplets” – Recap/ Review (with Spoilers) In order to take a step forward, you gotta take a step back and Midge pretty much leaps back to where she was in life before she met Joel.

Previous Recap: Episode 3 “Because You Left”

Table of Contents show
1 Previous Recap: Episode 3 “Because You Left”
2 Two Steps Back: Abe, Midge, Rose
3 1 Step Forward: Susie, Midge
4 The Route I Was Trying To Avoid: Midge, Abe, Joel, Rose
5 Highlights
5.1 Susie Opening Up More
6 Catch Up or Follow Along: Here [External]
7 Follow Wherever I Look on Twitter or Like us on Facebook.

So, as you can imagine, she and Abe don’t see eye to eye at all. Especially with him talking about an 11, if not 10 PM curfew. But, in his defense, it isn’t like Midge doesn’t have kids. Her coming in at 2 AM means Rose, because you know Abe isn’t much help, has to monitor and be awake if her granddaughter needs her. Especially considering she has an ear infection.

While things at home aren’t advantageous, Midge is really starting to hit the ground running when it comes to standup. She knows what type of act she is going to have, is learning how to hold for laughs and work a room, she is even looking into comedians like Red Fox, Howard Fawn, and Red Skeleton to see how it is done. What she doesn’t do though is piece together a set.

Lest we forget, all of her past stand up has just been a stream of consciousness, a rocket gone off after she got mad about something. So comes the question, can she perform and be funny without someone pissing her off? A question not asked of Susie, or Midge, but something which could be a problem in the future.

But, what is a problem now is that Midge wants more out of Susie. At this point, Midge has revealed every embarrassing or personal thing she could tell about her present life. Susie even knows what Midge’s breasts look like but what does Midge know of Susie? Well, after some guilt, Susie gives a rushed defining of her family tree. Dad has been out of the picture 15 years, mom is a laundress who once a year drinks and makes an utter fool of herself. Brothers are butt holes, sister is nice but married to one, and then there is her.

This for Midge is enough progress for her to be satisfied and, possibly, someone really trying to get to know Susie may have made her feel good as well. We’ll see.

The Route I Was Trying To Avoid: Midge, Abe, Joel, Rose 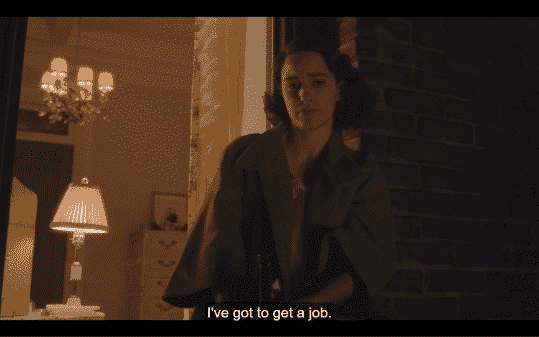 One could argue that Midge never saw herself as a working girl, you know a shorthand or secretary type. As noted in her last standup, there was this princess idea. However, now the would be Prince is living with the chambermaid, Penny, and the princess with her oppressive father. So, it seems Midge may have to get a job. Because she has become too independent, too much like her father and with him not wanting to give some leniency, what choice does she have?

But there still remains the question of how to handle the kids? Ethan maybe 3, and can be sat in front of a TV, but what about the baby? Does Midge really want Penny looking after her daughter? Much less, overnight? Because Rose, upon hearing Joel moved in with Penny, is a bit devastated. And god help her if she ever hears from Abe, or even Midge, that Midge rejected his proposal to give their relationship another shot. She may not stick up or help that girl for some time.

Though, what else is she going to do? It’s like Imogene and Midge talked about, her taking him back won’t dispel him leaving in the first place. Plus, in Midge’s head, with Penny being a “Methodist” version of her, who still works at Joel’s office, what will keep him from being tempted to go back huh? He already left once so the possibility is already out there.

No matter how you slice it, Alex Bornstein’s Susie is the catalyst of what will move this show forward. She is opening up Midge’s life potential to comedy and is forcing her to adapt to this new life. Which isn’t to imply Midge is outright naïve but considering the misogynistic joke Abe makes about her just reading the shoe ads of the paper, there is this perception that seemingly is universal. One in which Midge lives in her own bubble.

However, with being separated and thanks to Susie, a lot of the things she hunches about, be it meeting Lenny Bruce or having dinner once in the Copa, she has to recognize as privilege. That and her living with her parents without paying a nickel. And as noted in the last recap, it is only because Susie makes it seem possible that Midge can find the strength and drive to do any of this.

Which is why Susie opening up is so important. It shows that Midge isn’t the only one changing here and that she isn’t just some product. A topic I bring up because, taking note of the times, who knows if Midge, even at 26, may feel her husband exchanged her in for a different, maybe even younger, model? You know, someone who doesn’t have kids, isn’t Jewish, but basically is the same thing as his old one.

So with that in mind, I think Midge wanting more out of Susie was to prove that if Midge ever got inconvenient or maybe less funny, she wouldn’t just drop her like Joel did. For while she may not talk about it and weep, you can tell that still has her head messed up a bit. Especially since, like she is doing for comedy now, she really made an effort to make things perfect. Yet, look where that got her.