The Marvelous Mrs. Maisel officially begins and after being haunted by the idea of being single, she realizes how much better off she’ll be without Joel. 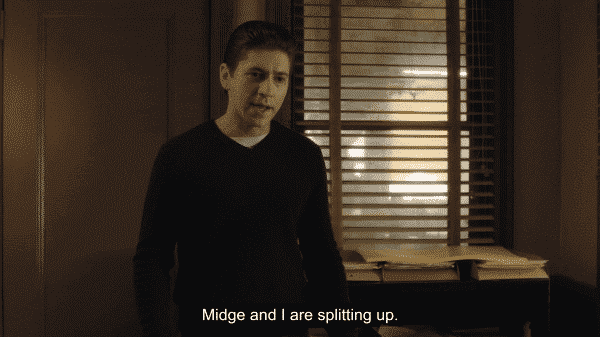 After that set, after being arrested, Midge just wants to go back to normalcy. Well, this new normal anyway. One without Joel, being single, hopefully not ending up in the back of her and Imogene’s exercise class and… Susie. Midge forgets about Susie for while part of her grand cathartic release, now she kind of regrets it. In fact, she says one part, her going topless, didn’t happen. So, to kind of forget the whole thing, she thanks Susie for her time, presents her with some money, and bids her adieu.

But, what does that matter? She is single, people are finding out, and she isn’t the only one being made feel guilty. Joel too is dealing with the consequences of his decision. His father, Moishe, sends his little girlfriend to a different department and repeatedly reminds him of how everything he has is because of him.

However, bad turns to worse when Shirley, Joel’s mom, hears about all of this. For with the kids not living nearby, she is getting old, and Shirley just being plain old dramatic, she has a fit. One that Rose has to deal with, then Midge, and then a dinner is scheduled.

As you can imagine, even with it being just around 24 hours since separated, with their Jewish parents, Midge and Abe are experiencing some form of hell. Especially when it comes to their fathers. Yes, Shirley is doing too much trying to cook despite being in someone else’s home, and low-key critiquing the food, but Rose has a handle on her.

Backtracking to the fathers, neither one are kind to Joel or Midge. For Midge, she is pretty much dressed down in a very shady way when it comes to her future. Moishe makes it sound like she will be lonely and without really much of a life and Abe? Psh, he damn near makes it sound like she should beg Joel to come back – even if Abe doesn’t like the boy what. So. Ever.

As for Joel, while he gets it bad from Abe? Oh, his father does him one worse. On top of repeating all he said to Joel in private, he also reveals that Joel is basically broke. So broke that the apartment Midge thought was hers? Yeah, it belongs to Moishe and since Joel wants to mouth off and tell Moishe to get out of his life, he tells Joel, and Midge in extension, to get out of his apartment.

Right Back To The Stage: Midge, Susie You know, Midge may not like getting arrested, may not take kindly to putting her personal life out there and being unladylike for the times, but damn does it feel good! So no sooner than Moishe talks about the apartment being his does Midge head to the club and Susie pushes whoever is on stage off. Thus leading to Midge going all the way off on the mic and cracking up the audience – as well as offending one or two people but, what you going to do?

This time though, no nudity but she does end the set like she did last time: With a police escort.

You know, there was a time I wondered why so many of the top comedians were Jewish and just witnessing what Midge has to go through with her parents and in-laws, it makes sense. Can you imagine dealing with these kinds of personalities, rooted in a culture that can be rather traditional at times, and not going a little crazy? Not having this need to vent and get people to understand why you’re a little loopy?

On top of that, Midge is a modern girl in the last century. I mean, she may not be fond of being a single mom, working a job, and things which have been normalized, but she isn’t some dainty thing either. Similar to what we saw in Alias Grace, in a way, the persona she puts up in front of men is a bit of a ruse. Meanwhile, the true Midge, we see her on the stage in the same way we saw Grace when she was hypnotized. In that moment, taken over and being able to unleash the madness of a woman whose thoughts had to be suppressed, she is allowed to go all the way off. Speak every sad or nasty thought, be the center of attention without having to feel shame about it, and just be her – unfiltered.

Making you wonder how long will it be until her family, friends, or former in-laws discover what she does?