Spencer’s background is dived into as Faraday continues to adapt in order to complete his mission. One in which Newton may not have given him all the essential details of.

So You Want To Know My Story? – Edie, Spencer, Drew

While Edie cuts a deal with the oil baron that Hatch sees as the devil, she also explores who Spencer is. The answer? A total, utter bastard, in more ways than one. To begin, his mom is an alleged terrorist from Russia, and Drew? Drew seemingly raised him, or was in his life, since he was in single digits. Which makes him backstabbing her to stay on the Faraday case, to get his white whale, shocking to her. But, she did foreshadow, many times, that Spencer would go as far as he thought was necessary, and whether it is throwing Drew under the bus or threatening Edie, this man doesn’t care. He just wants glory.

With Josiah becoming more and more like an Anthean, Justin decides to bring Porsha to the UK to help with Molly since Josiah makes it seem like taking care of his granddaughter is now beneath him. As this happens, Edie and Hatch secure the deal with Pressman Thorn’s organization and seem to even reconcile. Though, with how smooth Edie takes to her brother getting back on her good side, maybe a red flag should be raised?

But, that aside, Faraday contacts Newton because he needs advice, and Newton is pissed about that. Why? Well, he doesn’t want to be discovered, of course. However, there is some interesting information gathered from the communication. Be it that Faraday should have never been assigned a drone, that lying will be part of Faraday’s future and how he can survive, and that going public is the only way to beat the CIA.

Preparing To Get Off A Sinking Ship – Lucy, Faraday, Newton, Justin, Penny, Spencer

Just as Spencer betrayed Drew, there is a chance Lucy may betray Spencer. It is a bit too soon to tell if and when she may strike, but she is making an effort. While Spencer wants to keep Justin in the dark about what the CIA knows, Lucy tries to befriend her and get her to be an informant. Also, while Spencer doesn’t have much contact with Faraday, Lucy encounters him more than once.

Because of this, both Faraday and Justin agree that Lucy and Spencer can’t be trusted, and maybe the heads of OriGen either. So, they contact Hatch’s connection at the Washington Post, Penny, and begin selling their product, Faraday, and even Justin’s story. All in hopes that the CIA won’t have it in them to battle or try to suppress Faraday and Justin, or their work if their work is public.

But that might be the least of their worries. As Faraday practices lying and manipulation with Penny, he comes to realize Newton has been lying to him. There will be no going back to Anthea for him or Newton. The truth is, Newton is trying to bring Anthea here. Which, with Faraday pushing the idea Antheans are a peaceful species, could mean a potentially bloodless invasion. However, as shown by Spencer, any action like an invasion would surely have blood spilled, just on principal. Never mind, considering how Newton got multiple soldiers killed in a booby trap, maybe only drones are peaceful while adepts are very much like their human counterparts?

How do you make a detached psychopath? Well, on top of having him work for a government agency that often works in secret, add in childhood trauma! The combination strangely doesn’t humanize Spencer to the point of feeling sorry for him, but it adds layers so that you can understand his betrayal of Drew.

Spencer is a man who doesn’t feel like he has much, if anything, to lose. So, in his mind, all he has is things to gain, and cutting Drew out of his life seemingly was about getting rid of his safety net. For with losing her, that means he has to be more focused and willing to do something notably dangerous. All with the hope that, by creating an opportunity to fail spectacularly, he can succeed in the same dramatic fashion.

Lisa’s Loyalty Being In Question

There was always the question if Lisa would remain loyal. Spencer is volatile, and while he has the ability to get what he wants done, it is not without sacrifice. Someone like that isn’t a safe bet if you are still trying to make a name for yourself. So with her trying to win over Justin, maybe not seem like too much of a threat to Faraday, there is a need to ask who will win in the long run? Lisa, who is as capable as Spencer in doing something horrible, or Spencer, who could see what Lisa is doing as a slight against his authority, as she makes moves unauthorized by him?

With every step Faraday moves towards being a full-fledged adept, it’s easier to see the value of the version of him introduced in episode 1. That is the man who realized how to use human curiosity, their desire to put people on pedestals, and both admire and criticize them to use. How, by having a certain tone, bravado, and poise, you can command a room and make yourself seem indispensable.

But, there is the question of whether this will solely protect Faraday or will also protect Justin and her family as well. Because while Faraday is evolving, just like we don’t know what Josiah may ultimately become, the same can be said for Faraday. From what we know, he might become like Spencer, instead of Justin, as we learn what it truly means to be considered adept vs. a drone from his perspective.

Edie’s subplot, be it to undermine Spencer or reconcile with her brother, feels undercooked. Even with meeting a representative of Mr. Thorn, there is a lack of spark in that storyline. Then, when it comes to reconciling with her brother, it’s weird that one good interaction, with them tag-teaming, seems able to undo past issues the two have. Add in her son popping up, her shutting him out, and even Spencer having a very weird moment with her before reaffirming he would take her out? I can see that they want her to be more prominent, but I don’t think they have found the character’s strengths yet.

Simply put, no thank you. He told us he has a wife, and we’ve seen the kids. Also, Justin is clearly not over what happened with Molly’s father and has avoided processing that trauma. I get the idea here is that Faraday is going to start to mirror Newton, but surely we can skip the whole extramarital affair bit, right? 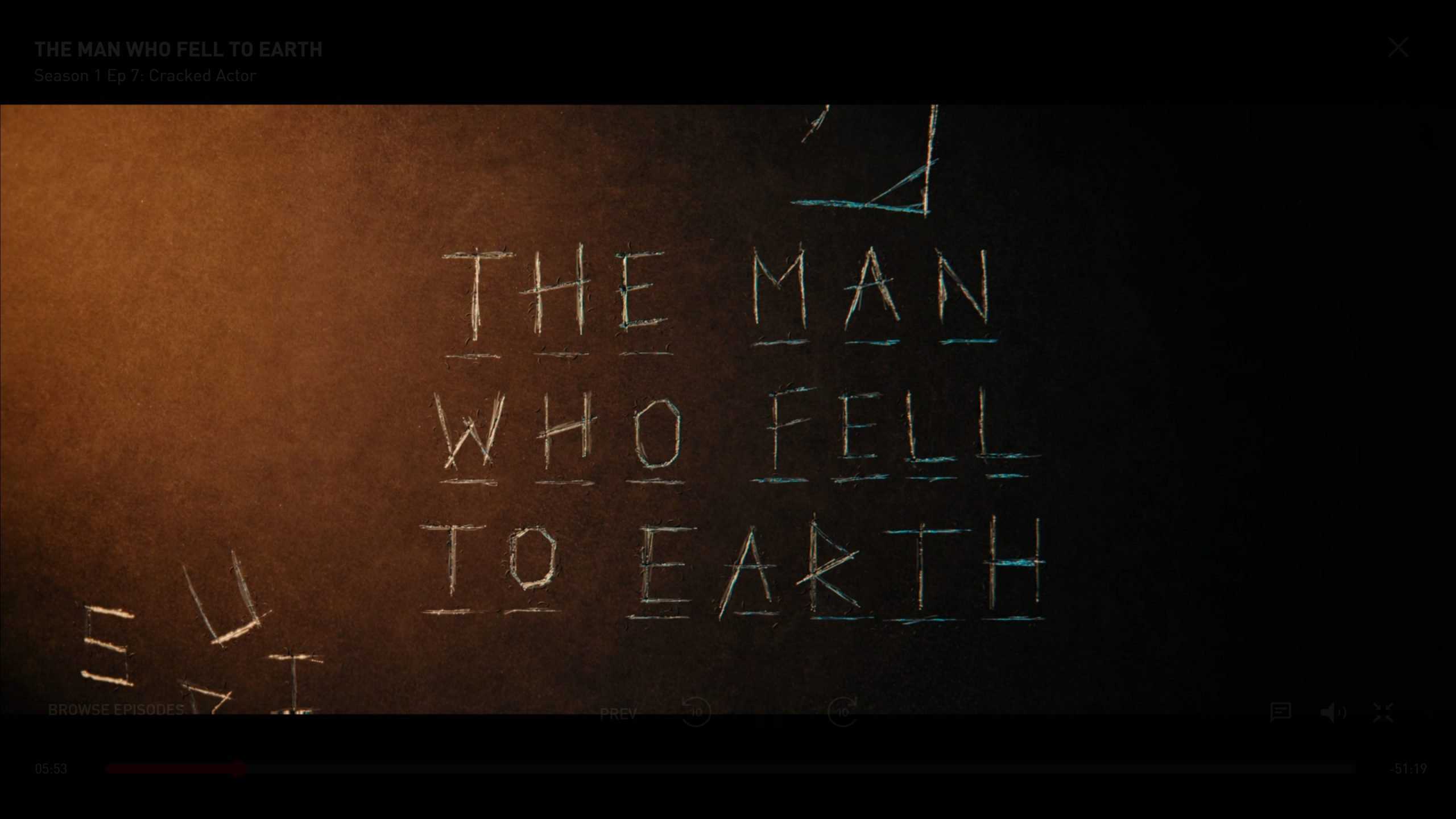 The Man Who Fell To Earth: Season 1/ Episode 7 “Cracked Actor” – Recap/ Review (with Spoilers)
Overall
As Spencer sets up some form of a threat, rather than watching from the sidelines, we’re pushed to wonder how Josiah and Faraday’s individual evolutions will end, alongside whether the show can figure out what to do with Edie, as everyone else presents a far more interesting trajectory.
Learning Spencer’s Background
81
Lisa’s Loyalty Being In Question
83
Faraday Understanding Human Manipulation
82
Edie’s Storyline
72
Faraday Potentially Falling In Love With Justin
73
Community Rating0 Votes
0
Highlights
Faraday Understanding Human Manipulation
Lisa’s Loyalty Being In Question
Learning Spencer’s Background
Disputable
Faraday Potentially Falling In Love With Justin
Edie’s Storyline
78
Subscribe to our mailing list Follow Wherever I Look on Twitter and Instagram, Like us on Facebook, and Subscribe to the YouTube Channel.