The Good Doctor: Season 2/ Episode 6 “Two-Ply (or Not Two-Ply) – Recap/ Review (with Spoilers)

The value of emotional intelligence plays a big part not just for patients, but the personal lives of doctors.

Despite being released by the hospital, now in the comfort of his rather large house, Dr. Glassman is still a bit insecure about what is going on in his life. He is told he should use a walker but you know he refuses to do that. He tries to pick things up with Debbie but with him falling, it seems now he wants to push her away. Which, considering they haven’t known each other long, it isn’t clear if she’ll honor his wishes or just seem him as a stubborn old man. One who she enjoys the company of too much to let his machismo insecurity get in the way of. 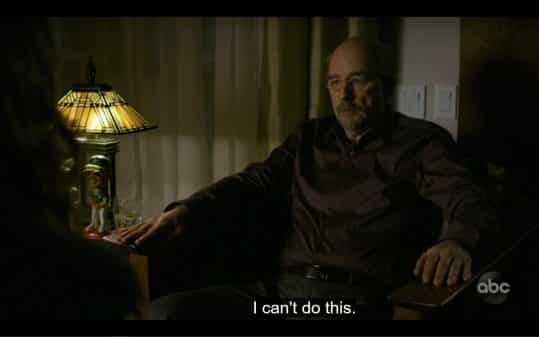 Dr. Glassman: I can’t do this.

I know I should find value in how rare it is to address the issues of someone Dr. Glassman’s age. Be it dealing with dating at his age, living alone and having to largely take care of himself, as well as not wanting to be treated as an invalid. However, I think because I’m at the age where I’d see my parent as Dr. Glassman vs. myself, I find his stubbornness kind of annoying. Yet, on a human level, I get it. He is someone used to having a certain amount of control and now with him barely having a hold on the basics, it’s frustrating. Especially since he wants to move on quickly and, if not take back his former position, at the very least be the kind of man he thinks Debbie deserves. Not just a friend she pities and talks to like she would if she was still a nurse.

So it should be interesting to see if the writers allow Dr. Glassman to make a full recovery or force him to adapt. Especially considering, like Shaun, Dr. Glassman is very much a “my way or the highway” kind of guy. So as Shaun finds himself having to compromise living with Lea, maybe we’ll see Dr. Glassman compromise on how life will be in the future. Assuming he doesn’t do something drastic.

Lea definitely didn’t think this whole living with Shaun thing through. His idiosyncrasies make it where it seems she has to bend to his will and it is driving her nuts. Especially since little things, like how toilet paper hangs, he will repeatedly talk to her back, text her even, just to prove his way is right. It comes to the point she yells at him and he looks so traumatized she feels the need to go see Dr. Glassman. Someone who really isn’t in the mood to give Shaun advice but tries. After all, who else has about 12 years of experience?

But, be it because of the place Dr. Glassman is mentally, or him just not wanting to become Lea’s go to when there is a Shaun problem, he tells he to split now than wait. Advice Lea doesn’t take, because it is a bit drastic, plus she has faith in Shaun’s ability to learn to compromise. While also realizing that she too will have to learn patience and other skills to live with Shaun peacefully. Especially while trying to deal with everything else going on in her life. 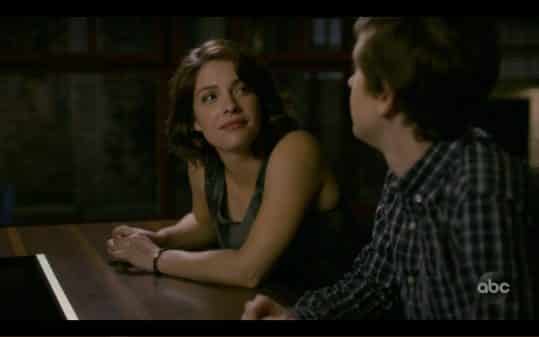 I’m trying to do some math in my head – If Dr. Glassman has only know Shaun for around 12 years, that would mean Shaun is likely less than 30. On top of that, Shaun had to have met Dr. Glassman around the time he was a teenager. So it definitely would seem that Shaun coming into Dr. Glassman’s life likely came around the time Dr. Glassman lost his daughter and maybe his wife. Thus explaining the crutch Shaun was for a long time.

Yet, what that doesn’t explain much is how Dr. Glassman brought up Shaun. I know it is very apples and oranges comparing autistic people but Dr. Glassman surely didn’t just finance Shaun’s education and set up his life right? Between therapy, which Shaun seemingly still needs, and maybe even a community, you’d think Dr. Glassman would have put that together. Though, who knows, with us only seeing Dr. Glassman and a young Shaun in a flashback once or twice, it is hard to say how Shaun was as a pseudo-son.

But, at the same time, it could be that Dr. Glassman didn’t raise or adopt Shaun. He could have just been a neighbor who Shaun sort of latched to and that relationship evolved into a mentorship. One that became a bit overbearing, but was based in love, the pursuit of redemption, and for Shaun, maybe liking someone doting on him like that. At least until it made him feel out of control.

There is a consistent clash between being a doctor who goes by the book, meaning this symptom + this symptom = this disease, and going based off feeling. Not necessarily just intuition but also listening to the patient and exploring how what is said and what isn’t probably would lead to the correct diagnosis. Through Claire and Shaun, we’re shown both can work.

Shaun barely listens to his patient past hearing what he needs to diagnosis and often gets lucky. With Claire, she listens to patient’s life stories, tries to relate when possible, and often finds her diagnosis and gets lucky. A lot of the time by luck. Take Claire’s case with Riley. For who knows how long no doctor was able to find something wrong with Riley. Yet Claire, just by pure stubbornness, by refusing to think Riley’s condition is psychosomatic or something done deliberately, found the problem.

Then with Shaun and the patient he shares with Morgan, Jas, that whole “Emotional Intelligence” thing which works for Claire, it backfires on Morgan. For she felt something for Jas. She too relied on her fingers for when she used to be avidly into archery. So when it came to maintaining Jas’ abilities to play the violin, she went to bat for her and failed. Leading to Jas having not just her finger operated on but her whole arm amputated. Which she squarely blames on Morgan.

Yet, with this failure comes Dr. Melendez giving some valuable advice – stop competing. He notes that, when he was a second year, he tried to do that with Dr. Lim and it just didn’t work in his favor. She would get these great opportunities, would often be right and with him trying to compete with her, maybe mimic what she did that others liked, he didn’t grow as he could have. Perhaps even found the style which would allow him to excel and eventually become friends with Dr. Lim.

Now, as for whether Morgan may learn from this? Who knows? Since her review with Dr. Andrews, there has been some progress but usually only with patients. When it comes to her peers, there is still this animosity which makes them a bit uneasy around her. Well, except for Shaun who barely pays her cruelty any mind. 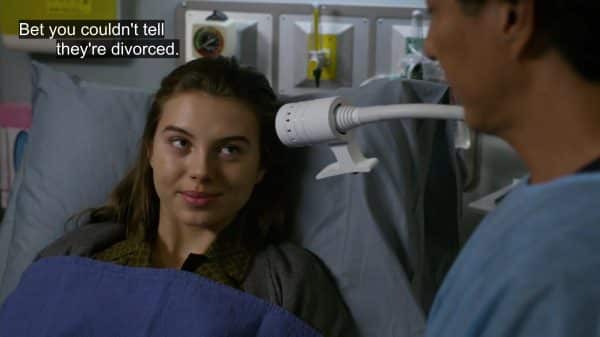 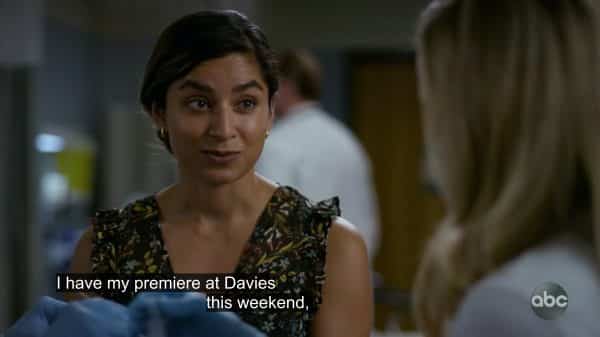 One thing I’ve always appreciated about The Good Doctor is that, 8/10, the patients matter. Whether it is the story crafted for the character specifically, or using that character to reveal something about a series regular, rarely do they get to come in and go out without leaving a mark. Take Jas. Through her, we learned that Morgan wanted to really pursue archery for a career, but that wasn’t an option. Be it because of her family, money, or what have you, she couldn’t do it. Making Morgan emotionally invested because, if she couldn’t do something, she at least wanted to treat someone so they could.

Then with Riley, her story helps keep in mind Claire’s background, which I feel they are going to use for something sooner or later. Also, it kind of cracked open the slightly mysterious Dr. Park. Someone who is starting to feel like a less abrasive Morgan, depending on the situation. If not a mix between Dr. Melendez and Morgan. But, with the reveal of how things went with his ex-wife in the last episode, him eluding to having a kid this one, we are starting to get more from than the story of a former cop turned doctor. Which has been the basis for his background for the longest.

Though, we have to also bring up the show reminded us that Dr. Lim and Dr. Melendez are competing for chief of surgery. Something which Claire has a stake in for she refuses to talk to Dr. Melendez past being cordial. So now it is time to see if, like when they were residents, will Dr. Lim best him again or if he has truly taken competing with her off the table? Not to say he’d just give the position to her but rather be the best he could be and not look over his shoulder.

Also, considering how much the characters seem connected, could Dr. Lim and Dr. Melendez be seen as what may come for Morgan and Shaun? Especially since, the way Dr. Melendez described his relationship to Dr. Lim, it sounds like he is seeing history repeat itself.

Speaking of Dr. G, I find his stubbornness annoying, too! He gave up sex, and most likely future sex, because he lost control (all because he wouldn’t use his walker). I understand why, but I don’t agree with how he is putting his pride first. It’s not like she cares, so he shouldn’t either. To me, the least interesting part of the episode by far!!

I really enjoyed the two hospital cases, much more then usual! The way they were diagnosed the same (with “emotional intelligence”) but shouldn’t have been, how we learned something new about so many cast members, how Morgan seemed so human but so “Morgan” throughout the episode, and on and on. Really well done!!

Saving the best for last – Shaun and Lea in their new apartment! For once I totally disagree with you. You say that Lea “definitely didn’t think this whole living with Shaun thing through.” But I don’t know how she could have anticipated just how bad/structured/strict Shaun is. He has a lot of idiosyncrasies, but she could not have seen or anticipated just how many he had. Also, my daughter is the same way, and I did not see this coming, so I don’t know how Lea could have. But kudos to the writers because I can totally see Shaun reacting this way!! This definitely was the best all-around episode this season!!!

To me, I think she looked at how it was being a guest in Shaun’s house and thought that was the extent of what it would be like to live with him.