While we are left with the unfortunate lesson that you can’t win them all, there is a rebuttal in there about still, at the very least, trying.

Shaun has a neighbor named Lea. It isn’t clear if she maybe become his friend, maybe a love interest, or what have you? However, with Shaun going out of his way to learn her name, surely that means something right? Even if she, similar to Claire or Dr. Glassman, is just another person who tries to help him obtain his form of normalcy.

As we’ve seen, diversity is a big thing at the hospital. Dr. Andrews is one of the top surgeons and is a Black guy, Dr. Melendez is the up and comer and he is Hispanic, both of their bosses is an Asian woman and the president of the hospital is Jewish. You may wonder why I bring up all these backgrounds. Well, it is because, based on the actions we have seen of Dr. Glassman, it seems that people often come in hot, they are the Hispanic or Black doctor who is a rising star, but then what? What happens when you aren’t new and shiny and no longer the token but one of many?

In a way, that seems to be Dr. Andrews’ problem. He is no longer a shining example and so when this VIP, Mr. Wannamaker comes in for a skin graft, he doesn’t want to take Aoki’s guidance and let Melendez be his second. He wants to be on top again, undisputed, but then he speaks to Dr. Glassman. In a very random conversation, he seeks advice and Dr. Glassman asks of him: what is your goal? To be president or to be the top surgeon?

The main storyline for Shaun this episode deals with how he and Dr. Glassman came to be as well as Claire trying to figure out Shaun’s eccentricities. Such as him not liking to be asked questions and how that is the easiest way to get him to shut down. That among a lot of autistic things dealing with stimuli. But what perhaps matters the most from this episode are two things: The first being an establishment of how Dr. Glassman became the caretaker of Shaun after his brother died. The second being The Good Doctor showing us that you can’t always save the patient and rules are rules. That we won’t always see a cast member pull a miracle out of their scrubs or bend the rules in such a way where it makes the hospital liable. Sometimes, you got to just take the victories when you can and accept that. 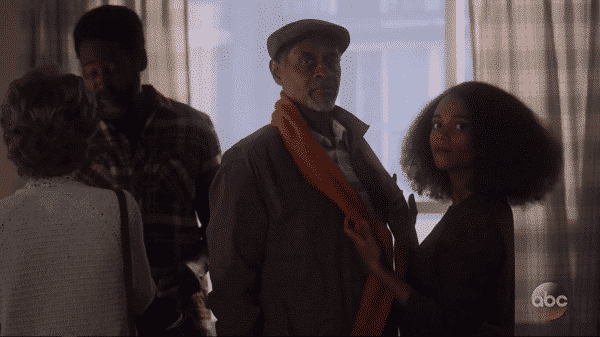 One thing that always bugged me about medical shows, if not programs featuring “professions,” in general, is that most have a pattern. What we usually see is a string of victories, some which come out of nowhere or upon technicalities, then a devastating loss. One which leaves us unsure how the protagonist will keep on keeping on. Thankfully, The Good Doctor doesn’t do that. The main patient of the episode, Chuck (Tim Russ), had one drink to celebrate his daughter’s graduation. A drink she gave him to celebrate being one of the first in their family to graduate college, and that knocked him to the bottom of the donor list. Then, to add insult to injury, he had three months to live.

Yet, on the flip side, the liver he lost will go to someone else. In this, we get balance. We get the tragedy of someone being given notice of death yet it isn’t Chuck dying on the operating table, the liver rejecting him or anything like that. We get a soft blow, for a lack of a better term. One which shows Shaun, Melendez, Dr. Glassman, etc., can’t always make a way out of no way. Which, in the long term, puts us on notice. We can’t expect them to always have answers, for Shaun to come up with the solution due to being a savant or even stubborn. Sometimes, you have to accept that rules are rules and breaking them maybe in the best interest of the patient, but not the doctors, the hospital, and all the patients whose lives have been altered because you wanted to save one person.

I’m so glad Dr. Andrews is evolving. He seemed like a low-key petty villain but with the way it seems Dr. Melendez gets on his nerves, you can tell it is because he feels like he is being replaced. Not shoved out like Dr. Andrews is trying to with Dr. Glassman, but now the wheels are turning and things are making sense. Dr. Andrews was likely the go to guy, top in the hospital, always coming off big victories. Dr. Melendez has since stolen that thunder and being the boss of the hero doesn’t have the same luster as being the one standing at the podium.

So what else is there to do than become president? How else can you make the kind of decisions that lead to notoriety? Hell, maybe, like Dr. Glassman has done, make the hire who becomes the next big thing? Thus being able to give yourself a pat on the back and accept some props from your peers. Because, at the end of the day, what Dr. Andrews I think is fighting off is insecurity. Not even just from a work point of view but a personal one too. Everyone is linked up through friendship or dating and he is on his own. So, with office politics being what they are, it is better to gain strength than create faux alliances you know aren’t going to stay forged when the poo hits the fan.