When a case gets too personal, Robyn slips up and leaves herself open for exposure.

Table of Contents show
1 Recap
1.1 A Boy In My Class – Delilah, Robyn, Vi
1.2 Justice and Fairness Are Hard To Guarantee – Delilah, Robyn, Det. Dante, Benjamin
1.3 It’s Always The Ones Closest To You – Delilah, Robyn, Vi, Detective Dante
1.4 Things To Note | Question(s) Left Unanswered
2 Commentary/ Review
2.1 Having To Set Aside Robyn, A CIA Agent Of Top Caliber, Got Found Out By A High School Student
2.2 Escape The Neighborhood and the School, But Still At Risk
2.3 The Equalizer Directory

A Boy In My Class – Delilah, Robyn, Vi

While skipping school, a boy Delilah bonded with, and helped get acclimated to her private school, gets shot. This, as you can imagine, traumatizes Delilah and puts Robyn into action. For with the boy being Black and close to Delilah, it triggers memories of so many kids caught in the crosshairs. Of which both Vi and Robyn share names from their upbringing who were mowed down despite being completely innocent.

After the boy dies, Delilah is disheartened to hear his killer is let free on bail, and her friends who witnessed the murder are recanting their statements after being threatened. Note: Delilah is also threatened, making this all the more personal for Robyn, leading her to take this to the next gear. 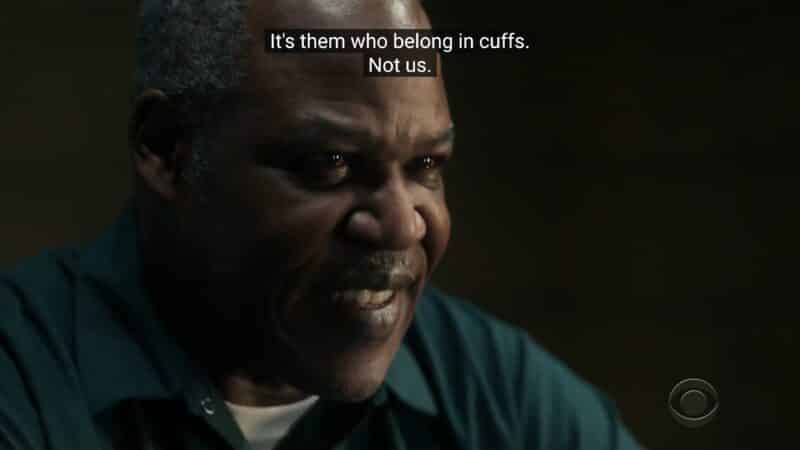 Which she wants to try to do by the book, so there is proper justice delivered, but Detective Dante is still unsure about her methods. He even checks in with his dad, Benjamin, to try to see why his father went as far as to take drug money and really do illegal activities, and with that, Benjamin realizes his son is looking for the line.

However, with Robyn, in this situation? There isn’t a line. She wipes out both the Brigada Seven, an eastern European mafia that just came to New York, and the Molina Cartel, who were the targets of the original shooting. Thus, Detective Dante is left with a lot of dead drug dealers, which could be a plus, for now, until the power vacuum comes in.

Though, with realizing how much Robyn can get done, once again, he considers a partnership. But he makes sure to note if he doesn’t come after Robyn, someone else will, so she better prepare for that.

It’s Always The Ones Closest To You – Delilah, Robyn, Vi, Detective Dante

Sooner or later, Robyn was going to get found out, and it all began with Robyn avoiding going down to the police precinct, and then Delilah catching Robyn’s face amongst Detective Dante’s files. Now, why in the world, after him saying he won’t be involved and a warning not to be, is Robyn’s picture so high up in his paper pile? I don’t know.

What is known is that, despite Robyn covering her tracks for decades, Delilah learns she is responsible for the death of her friend’s killer, amongst many others. How? Well, asking the right questions, hiding in her mother’s trunk, and accessing her mother’s secret storage space that has her guns, wigs, passports, and money. Because, you know, despite having a whole lot of heat on you, I guess Robyn doesn’t feel the need to check her vehicle for a bomb or anything like that. Hence someone barely 16 figuring out your identity in a few days, while others couldn’t for years – including Aunt Vi.

But rather than hold onto this information until season 2, Delilah reveals her hand and leaves Robyn stunned. Also, Aunt Vi barely tries to provide cover, which leaves Robyn just saying that Delilah doesn’t understand, and you wondering what will come next?

Having To Set Aside Robyn, A CIA Agent Of Top Caliber, Got Found Out By A High School Student

I really can’t get past how Delilah found out about her mother within a few days when Detective Dante took weeks, if not months; Aunt Vi didn’t know for decades; and some of the biggest terrorist organizations, and cartels, still don’t know who Robyn is. I don’t know how we should look at this. It really does undermine Robyn’s resume, yet you can’t forget she was blinded by the fact someone threatened her daughter. So maybe she wasn’t checking for bombs, tails, and things like that? Delilah asking who is her mom, really?

Either way, the impact of this will certainly make season two interesting, and considering how betrayed by Robyn and Aunt Vi, I’m sure Delilah will feel, it means we will have to meet her elusive father.

Escape The Neighborhood and the School, But Still At Risk

As noted in American Skin, even in the recent episode of The Chi, there is really only so much you can do. You can move to a good neighborhood, put your kids in a good school, but all this does is lessen the chances of something bad happening – it doesn’t eliminate it. For, as shown with Delilah, all it takes is the kid in the wrong place, at the wrong time, to undo everything.

Heck, and as shown with Delilah’s friend, even if your kid is innocent, they’ll get the blame, automatically, under the assumption they were the bad influence, despite all you did to make them an exception. That whole subplot really pushes you to remember that money doesn’t give you equality, moving to a good neighborhood doesn’t mean recognition for doing well, and even if you try to pull yourself up by your bootstraps and make a better life for your family, it doesn’t mean you won’t get the same mud and manure you are trying to get out of, kicked towards your face. The Equalizer: Season 1/ Episode 10 [Season Finale] – Recap/ Review (with Spoilers)
Trajectory: Climbing
With Delilah learning the truth, so comes her becoming a liability and also the need for her father to step in since you know this grand lie, even if by omittance, isn't going to settle right with Delilah.
Community Rating0 Votes
0
Highlights
Escape The Neighborhood and the School, But Still At Risk
On The Fence
Having To Set Aside Robyn, A CIA Agent Of Top Caliber, Got Found Out By A High School Student
82