For the most part, “Love Jones” acts as a reprieve from the drama thus far as reconciliations happen and love blooms between characters.

Persistence, depending on who it is, can be commendable or seen as harassment. When it comes to Christian, it is laudable, even cute, and with an understanding of what Kiesha has been through and taking his time, he wins her over.

Now, this isn’t to say there aren’t challenges. When Christian talks to his middle school crush, perhaps first love at work, Kiesha gets a little jealous, but Christian’s openness and reassurance calm her. Also, he just gives her that romantic lead kind of love which makes it seem like it’s all about her, and he’s willing to adapt to what she needs.

For example, they go to a poetry show, and when the rhymes hit a little too close to home and Kiesha feels the need to leave, Christian doesn’t get mad or anything like that. He asks if he can hold her, comfort her, and they continue their night without making it a thing. Thus leading to her truly trusting herself and him, with her vulnerability and perhaps giving fans a new couple to root for. It’s acknowledged that what happened to Kevin was messy. However, repairing the relationships lost has been avoided. Now, part of the reason is old issues that weren’t addressed, like Jake’s issue with Kevin not having his back. Also, Kevin clocking out when with Jemma and not talking about what was going on with him. These remain conversations that no one really has with Kevin and work out.

Rather, Kevin finds himself forced to accept what went down and for the sake of his friendship with Jake and him caring for Jemma, just wanting people to be happy and them the same for him. A state that was hard for Kevin to get to since he thought he could win Jemma back for a second, but when she makes it clear it isn’t cute but harassment, that puts an end to that idea.

However, one integral part of everything being squashed is Maisha. For her calling out Jemma is a necessary part in the boys no longer having beef. Granted, Jemma isn’t entertaining Kevin, but she is also not owning up to how she damaged a relationship that was going on for years before she showed up.

But, ultimately, again, things are made chill. Kevin reconciles with Jake, has an understanding with Jemma, and as for Papa and Maisha? Well, they talk and are in a better place, but it doesn’t seem like they’ll get back together soon. Mainly since Maisha, with stepping out from both Papa and her friends’ shadows, feels the need to make this adjustment on her own rather than allow Papa to act as a crutch. 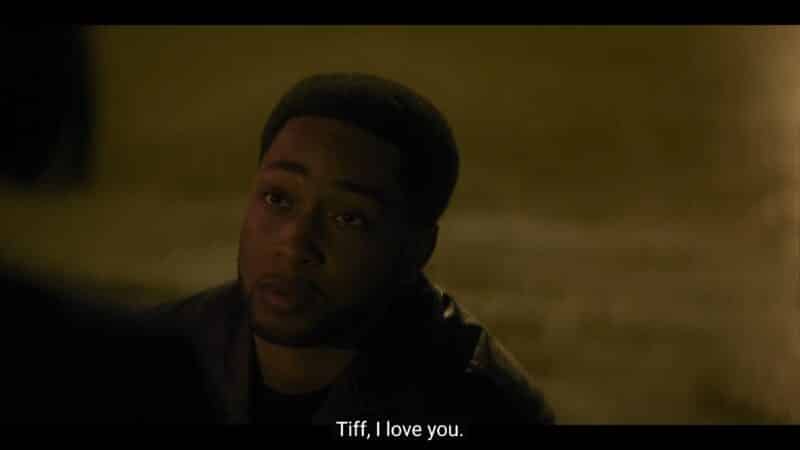 Emmett acknowledges it’s on him to reassure Tiff and make it so his past misdeeds don’t impact what they have or could have. The problem is, being held to his past is impeding his and Tiff’s future, and he is coming to the point of wondering whether him being more loving, romantic, consistent, all the things she originally wanted if that could change her mind on a open marriage? As of this episode, the answer is “No.” She likes having sex with Dante, who seems to be the main one she is messing with, but with her potentially spending the night with him? It seems a step too far for Emmett.

But, what does making breakfast the way she likes, role-playing, and a quality date mean when she still fears him cheating on her and her remaining faithful and feeling like a fool? So, with coming to a bit of an impasse, Emmett proposes divorcing.

You were my first love. But that doesn’t mean you have to be my forever love.
— Jemma

We Got To Experience Joy

Sometimes with The Chi, it seems like there is a dark cloud that hangs over every episode, and while we may get enough light for some form of hope, it seems things will never clear up. This episode, however, gave us that clear day. All the drama dealing with Douda, the community policing, Nina and Dre’s marriage, Jada’s cancer and more, was set aside so that viewers could get a reprieve. Thus allowing us to see Jake, Kevin and Jemma reconcile, acknowledge how messy the transition was, but ultimately note they just want each other to be happy. Heck, as a bonus, Maisha and Kevin talked about their relationship and addressed the weird situation regarding Kevin going from being with Maisha to Papa – which has been avoided for the most part. Thus allowing them to deal with their issues on screen rather than be handled off-screen. Then, when you add Christian and Kiesha giving us some of the most romantic scenes this show has ever had? Overall, it just seems like the conversations that needed to be had so characters could move forward were had, rather than them remain stuck or taking steps back.

But of course, you can’t get happy endings and joy out of every single story. Emmett and Tiff have been trying to figure out a way to stay married, and the open marriage was a flawed way for them, but Emmett tried. However, it clearly isn’t working out since Emmett doesn’t want his wife having sex with a bunch of men, and definitely not Dante. He just wants her to have sex with him. The problem is, she feels her commitment to him is a one-way thing, and he potentially will always be a cheater, just with larger gaps between each mistake.

So, while loving them together, there also comes the question of whether we should want them to be apart for the sake of each other’s sanity and joy. For as Jemma and Kiesha presented, and we saw throughout the episode, it can be cute and attractive when it is the right person making an effort, but if it isn’t the one you want? Then it becomes harassment, a nuisance, and a bane to your existence. This makes us hope, with Emmett wanting to end things now, maybe he and Tiff can avoid the worse way their marriage could end.

The Chi: Season 4/ Episode 8 – Recap/ Review (with Spoilers)
Trajectory: Plateau
Is it the calm before the storm, or signs that season 4 may end with a sense of resolution and season 5 could be seen as an entirely new chapter for most, if not all, of the cast? It's hard to tell, but anything seems possible.
Highlights
We Got To Experience Joy
Disputable
Emmett & Tiff
84
Subscribe to our mailing list