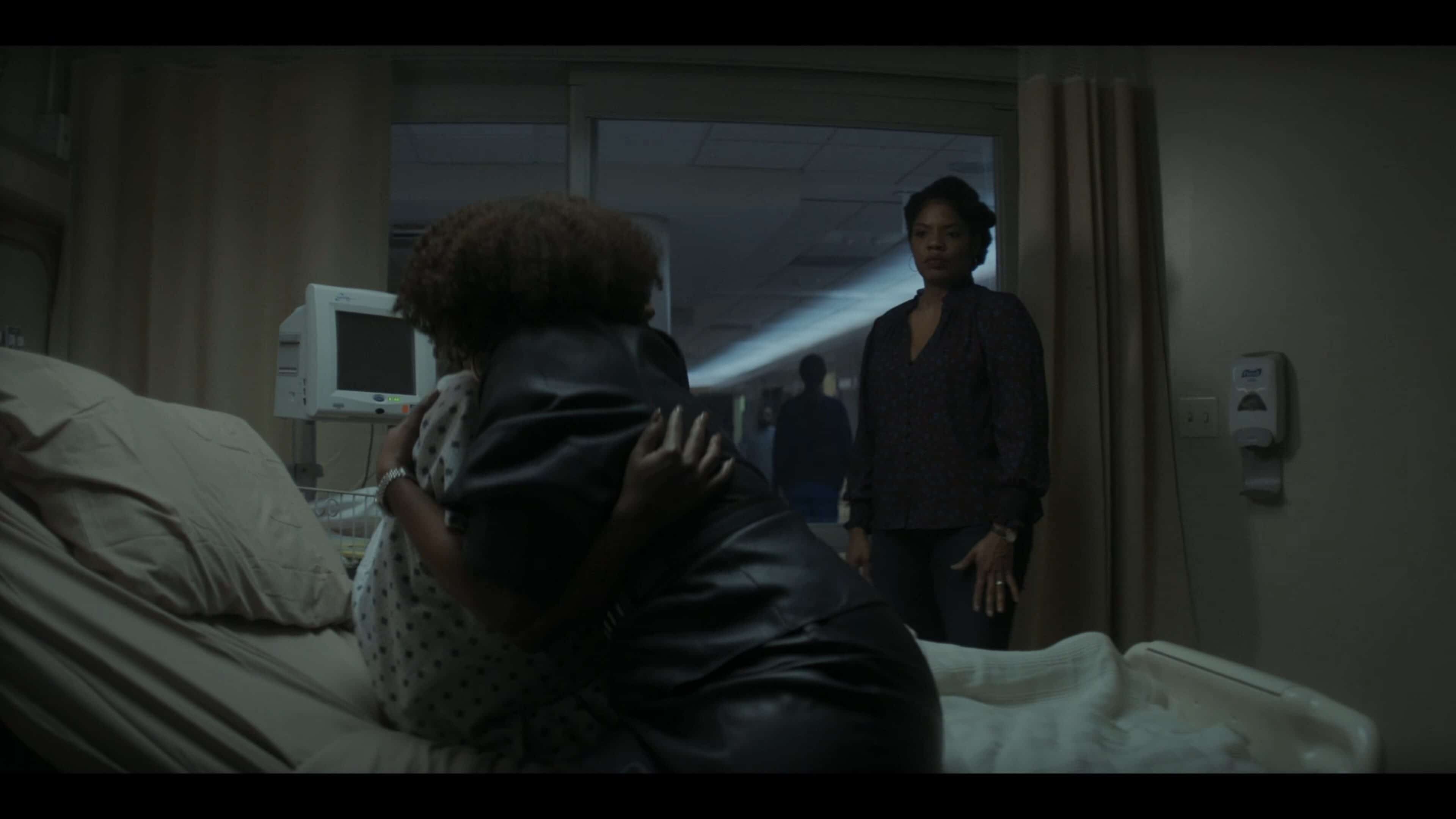 Tabitha Brown returns as Octavia during a pivotal time as all of Kiesha’s family seems to be having relationship issues.

If You Had Just Done Something Sooner – Tracy, Trig, Nuck, Imani

Imani is really not letting that girl, Trinity, just get forgotten. So she tries to get her out, even tries to get Trig and Tracy’s organization involved, but it doesn’t change Trinity’s fate. Nuck seemingly had her killed for trying to escape, and Imani is ready to blame everyone who didn’t do something. Be it Trig for not speaking up when she asked, or Tracy, who knew about Nuck’s trap house for a long time not doing a damn thing.

But, with her connection to Otis, maybe Imani may end up in his office asking for something? If not guilt Tracy into using her capital to do what the police avoided for years?

I Can’t Do This For Much Longer – Jada, Dre, Nina, Kevin, Jake, Emmett, Tiff, Dante, Jemma

Emmett can have sex with other women, but it is clear he isn’t getting off on it like Tiff is with Dante. Because of that, he still advocates for stopping, but Tiff is dickmatized and damn near having two relationships going simultaneously. The only difference being, she doesn’t go out in public with Dante.

Yet, because Emmett has sex with someone Tiff doesn’t like, she wants to lay down ground rules, all of which are in her favor. As for Emmett? Honestly, he wants Tiff to stop having sex with Dante, but her counter is sex with mad other people, and that doesn’t work either. So the two remain at an impasse yet still married.

This for Emmett is a good thing since Jada has reached the point she can’t keep her secret anymore and tells Emmett, who Tiff quickly picks up isn’t in a good place. So maybe, while she is still hurt by the Dom thing, strengthening their emotional bond may help Emmett not have to deal with someone having sex with his wife.

However, while Jada’s reveal might bring Emmett and Tiff closer, the damage may have already been done between Nina and Dre. Especially since Nina still has PTSD from what happened with Kiesha and Dre not picking up calls or returning texts? It has her suspicious. Add in seeing a text from Jada being glad Dre kept their secret? Oh, she is about to go OFF!

Speaking of secrets, Kevin has been less and less supportive and hasn’t fully clued Jemma into what is going on, she cheats on him with Jake. Mainly since he is the supportive guy she wants and is being consistent. Now, mind you, neither Jake nor Jemma seem ready with a plan on how to potentially reveal what went down. So maybe the dance is when Kevin learns the truth?

The Right Person At The Right Time – Octavia, Kiesha, Nina

After a religious couple meets Kiesha about adopting her baby, she heads to Octavia’s job and tries to learn more about her. All of which she hears is good but, one of Kiesha’s struggles is that she wants for her kid what she didn’t have and a single mom? She isn’t sure about that.

However, after a Braxton-Hicks scare, and seeing how Octavia advocated for her, and even stood up to Nina? Oh, Kiesha was sold. Octavia, you are the mother.

I Just Want Tiff and Emmett To Make It

Did Emmett screw up? Yes. Does Tiffany have all the right in the world to be mad, disappointed, and desiring to be petty? Absolutely. However, her messing around with Dante really ain’t going to make things better. Never mind, like in the movie Mark, Mary, and Some Other People, it seems clear this relationship won’t survive if other people are involved. Especially since Tiffany isn’t treating Dante like a d**k appointment. She lets him kiss her, hold her, and she is basically having two dueling relationships at the same time.

But there is hope that with things ending off with us being reminded Tiff still loves and cares for Emmett, maybe the wounds will heal. Though, it could also be what makes Tiff go to Dante more as she potentially finds Emmett overwhelming. Who knows?

I so badly wish they had Tracy exit and gave Octavia all her screen time. Not that I have anything against the community policing plot, but the whole Roselyn and Tracy thing, featuring Otis, it just makes us roll our eyes. Meanwhile, we got Octavia here, an architect with fertility issues, presenting an interesting storyline that got put on ice for a few episodes.

Though, with Kiesha officially committing to Octavia, here is hoping we see more of Tabitha Brown. For even beyond our stanning, I would say her scenes bring new life into the routines we’ve long become used to with most characters. And just her ability to be strong against the doctor and even Nina, while vulnerable enough for Kiesha to trust her, was a juggling act I quite loved.

I miss Papa and the trio, don’t you? He was the voice of reason, seemed to cool down whatever issues Jake and Kevin often had, and it sometimes feels like things are falling apart since he has less of a presence in their lives.

But even outside of his role in Kevin and Jake’s life, I just feel like they are really letting the ball drop with him. Be it this podcast storyline, which leads to a raised eyebrow, or letting this whole Maisha storyline go to the waste side, never mind Papa reconciling with his dad after seeing him take a bribe.

This is why we’re a little bit frustrated with some characters this season (Tracy) since it seems those who have potential, or presented the likelihood of growth, are being set aside for some BS.

I just want more for Jemma, and I feel like her kissing Jake, and all that we’re told to expect going forward, is for drama more than anything else. You could submit it is to show she is flawed, imperfect, and not always on the moral high ground, but I’d disagree. In my mind, similar to Tracy, who we’ll harp on until the season is over, likely, it feels like a disservice is being done.

With both Tracy and Jemma, they can’t just focus on the work they are trying to do in or for their community. They have to also give them a messy storyline as well. Which, maybe to the writers and actors, messy to them means complexity and the joy of having more scenes and different actors to play off of? But for us, I’d say it competes or eclipses what the characters are trying to do because of who they are doing it with and how that person’s story easily can and will consume them. The Chi: Season 4/ Episode 4 – Recap/ Review (with Spoilers)
Trajectory: Plateau
One could say that The Chi is trying to find a balance between messy, entertaining storylines and topics that address the community and how it is evolving. However, I don't think many could say confidently that the balance isn't off and the formula can't be improved.
Highlights
I Just Want Tiff and Emmett To Make It
Octavia
Low Points/ On The Fence
They Need To Stop Playing Papa Like This
Jemma and Jake
78
Subscribe to our mailing list Follow Wherever I Look on Twitter and Instagram, Like us on Facebook, and Subscribe to the YouTube Channel.