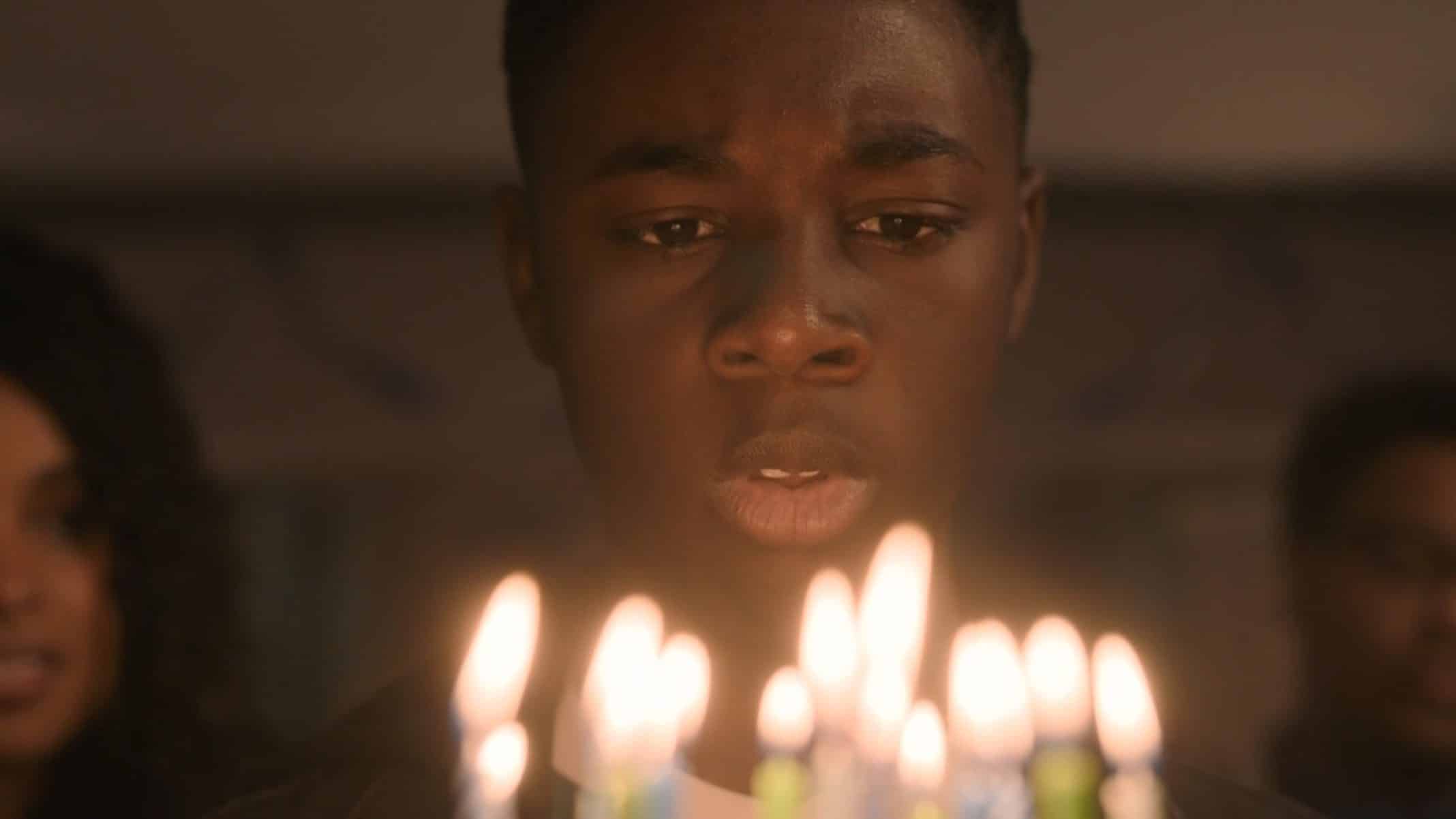 As one character celebrates a birthday, viewers are forced to mourn the loss of yet another character on “The Chi.”

Guess what? Tiffany’s supplier is Hannibal! You know, Brandon’s cousin with the locks and who had an Asian man renting a room, or closet, in his home? Yeah, and because of that, Tiffany gets a hold of some new kind of kush. Which, despite the exclusivity, Tiffany gets mad at Emmett.

Why? Well, as much as Emmett likes a hustle, let’s not forget damn near each one he had, especially with a partner, has thus far failed. Plus, even before learning Hannibal was the big boss, Emmett was making a lot of noise, and Tiffany’s supplier is rather exclusive. So he damn near blew her situation up.

Though, to really cause trouble, Tiffany exchanges some weed for a psychic reading, and while the psychic notes Tiffany and Emmett have a strong love, it is also noted it will be tested. How? Well, Emmett seemingly is going to put his penis in or around a woman it doesn’t belong near.

When it comes to Otis’ personal life, he has liabilities and assets. Jake is a major asset, so Trig’s continued desire to go to court for custody could become worrisome. After all, alongside playing the role of Otis’ son, he is his legacy. Hence his financial investment in Jake.

However, Trig is making it clear that he ain’t gonna keep fighting and making moves if Jake doesn’t want him. He even secured $50,000 to fight the case, and that could go back home with him and the absent Imani and do a whole lot. Thus leaving Jake with an ultimatum that is, so far, learning towards Otis.

Which, believe me when I say, he appreciates the loyalty. Especially since his momma, Opal, decides to bash him on television and endorse his opponent. This, since Otis ain’t going to have his own momma get a beat down, is something he just wants to let go. But, Rose doesn’t allow that to happen so, out of her pocket, or Otis’, somewhere around $20,000 is paid to shut her up.

Now, being that $20,000 is a lot of money that didn’t need to be spent, Otis is upset with Rose. Although, with his mom being exposed and him spinning it as exploited, he gets the chance to use her to advocate for more mental health services. Also, it opens up Camille for an attack to make it seem she is willing to do anything and thinks the people of Chicago are gullible.

For Kiesha and Kevin, Kevin’s birthday always included getting pancakes at a local restaurant. It isn’t clear what started this tradition, but it is one Kevin honors and holds dear. Especially since Kiesha always came with the right gift. Sometimes gifts that barely cost anything, like a photo album.

But this year? Omari is holding her captive all because a girl in high school, Sophia Boyden, rejected him, apparently slept with anyone who’d wag their tongue at her, got pregnant, fat, and no longer desirable. Thus, when it comes to Kiesha, he wants to protect and keep her from that. This is why when Ronnie was poking his head around, he almost got, got.

Luckily, that doesn’t happen, and while Ronnie, who gets to enter Omari’s house to use the bathroom, hears Kiesha, he doesn’t pursuit it yet. Likely due to him taking Miss Ethel out to the club she used to run, which now houses an upscale male revue. One Miss Ethel is not only into but comfortable enough to hold court.

Thus leading to one last happy moment, and perhaps the most revealing and lucid scene Miss Ethel had in a long time. Making her death the same night tragic.

Miss Ethel has been in the struggle for a minute. Between being beaten within an inch of death, losing her home, and memory loss, she has been spiraling, and it has been hard to see. Which makes her having a moment when she isn’t freaking out because something wasn’t how she remembered such a blessing. Then to follow that up with her having fun AND holding court? It almost makes you wish we got to see a fun Ms. Ethel more often.

But, what can we say, while “The Chi” does treat its female characters better than it did before, it’s far from where you’d expect and hope it would be.

I miss “Star,” don’t you miss “Star?” And one of the reasons to miss that show is we haven’t seen the marvelous Juanita Jennings in a while (She’s also in “David Makes Man” but in a smaller role. But, as with her role on “Star,” she knows how to make an appearance and steal a scene. Now whether, with her being Otis’ mom, this means seeing and hearing for her more? Well, that’s up in the air.

However, there is no denying she made things far more interesting than they have ever been, when it comes to him.

They Killed Off Ms. Ethel!

“The Chi” is still bloated and, unfortunately, with shows like this, the easiest way for them to make room for new characters or end the storylines of old ones is killing them off. But, the problem for us is, as much as you recognize Miss Ethel’s health was going downhill, she had this moment of brilliance that made you think she could be part of the charge to give female characters more of a voice. Heck, to give women of a certain age, Black especially, a role beyond being someone’s mom, grandmother, or aunt.

So with killing her off, I must admit while no tears were shed, it doesn’t make me hopeful for the future of women on this show. I mean, no offense to Jada but, surely she can’t be the only one who has a life beyond how she is defined by the men in her life, right?

The End Of Jemma & Kevin?

*Fingers Crossed* Let us hope that Jemma telling her mother about Kiesha and that spreading about, will only lead to a small fight. Not that I don’t love Papa and Maisha, but including Jemma and Kevin gives us the whole package.

Plus, it makes them seem less like an exception, you know? For how many girls do you see like Maisha and Jemma having guys and being in happy and healthy relationships? Never mind, everyone is medium to dark in skin tone, and as much as we love OWN and their Black dramas, let’s not pretend they don’t get some colorism side-eye here and there.

At the very least, with “The Chi,” you get a little bit of every skin tone, body type, and age. And as said multiple times throughout the series, one of “The Chi’s” most significant assets has always been Kevin and his friends. So as they transition to being full-on teens, I just hope girls like Jemma don’t end up like Maisha’s cousin who we haven’t seen since, what? Maybe the first season?

How Much Longer Kiesha Going To Be In That Basement?

So, this season has ten episodes, and while Ronnie likely heard Kiesha, he didn’t make any move, speak to Dre, none of that. Thus making it so we’d be lucky if she got out episode 8. Which isn’t to say her getting out in episode 7 is impossible, but with us just learning the reason Omari is holding her captive, and Kiesha learning how to manipulate him, it seems too soon for her to get free.

With that said, all I know is, they better not wait until the finale.

Something is off about Trig without Imani around. Maybe it is because she was different and the conversation she brought to the show? Never mind the community which also came with her? Either way, Trig seems like Reg 1.4, and I’m starting to think he needs Imani to be more than just another thug. Because with Jake the weakest of the three boys, in terms of story, neither one is benefitting from their screen time together.

With a tragedy, a birthday, and learning the reason Kiesha is being held captive, “Woo Woo Woo” is a notable episode.

How Much Longer Kiesha Going To Be In That Basement? - 74%

With a tragedy, a birthday, and learning the reason Kiesha is being held captive, "Woo Woo Woo" is a notable episode.