Violence begets violence, and there can never be peace as long as revenge links together like chains. In other words, things only get worse for damn near everyone.

Naturally, when Ronnie reveals himself as Coogie’s killer, Brandon whoops that ass. What he wasn’t expecting though was Kevin to shoot Ronnie and that gun, belonging to Jake’s older brother Reg, to end up lost. Mind you, not because Jerrika got rid of it, for instead she decides to, upon seeing it in her home, getting rid of Brandon. Nope, it’s Greavy, Lavern’s boyfriend, who gets rid of the gun and screws Jake and Brandon over in the process.

You see, Reg prefers people owing him vs. monetary payments. So, for his little brother, he is his newest shooter. As for Brandon? Well, with a credit score over 720, he got plans for him. What exactly, who knows, but he definitely is going to make more than the cost of the gun off of this boy.

Now, as for how Ronnie is doing? Well, luckily for him, he makes it to Ethel’s and she guilts Jada into patching him up. It isn’t enough to make him as good as new, but it’ll work for now. Heck, it was good enough for him to leave Ethel’s and barely miss being interrogated by Detective Cruz. Someone who, with Detective Wallace trying to get him to owe him something, is really trying to cover his tracks now. Seemingly, because Trice isn’t moving fast enough, Quentin decides to take his dog Daenerys. Now, as for why he is poking the bear like that? Who knows but what perhaps matters here is Trice might be a snitch. That is, assuming I’m correctly identifying who was in the car with Wallace.

Baby steps of progress continue for the women of the show or just Jerrika. Especially as we saw her hang out with her girls. Even if they are against the best relationship on this show. 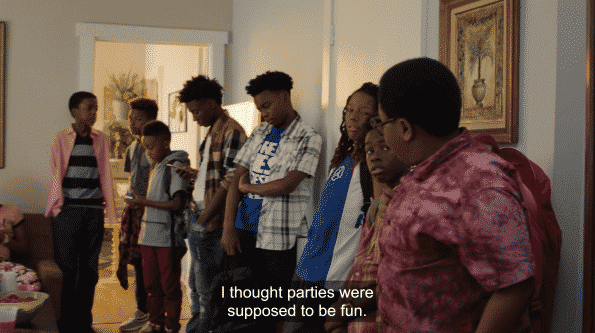 It’s nice that, with the violence Kevin has witnessed, Kevin being initiated, and all that, Papa reminds us that, ultimately, these kids are just kids. They don’t know what a party is, aren’t at that point where parties are about hooking up, drinking or drugging, it is either hanging on the wall, being on your phone or dancing. And can I just say, I love Papa more and more? This young cat talking about wood whittling in his spare time. It’s so random and kind of weird, yet something you have to admire him teaching himself.

Is This The End of Jerrika and Brandon?

If I was to be completely honest, the only thing I really enjoy about this show at this point is Jerrika and Brandon’s relationship, alongside Kevin’s storyline. So with them clipping Jerrika and Brandon, I’m in a little bit of pain. Borderline Denzel Washington in Glory

tears. Especially because she cut him off with precision. But, then again, who is to say what she would say about Kevin setting him up, him beating the hell out of Ronnie, and then covering up for Kevin after he shot him? While it was predictable for us, since Brandon didn’t have a gun to shoot anyone and clearly doesn’t have it in him, so comes the question of what comes next?

While this general, “We don’t snitch” idea seems to hold strong, so comes the question of how long they going to let folks get shot and not say nothing? Jason getting shot led to Coogie, which led to Ronnie getting shot. Who’s next? Is Kevin going to get shot by Jake for forcing him into gangster activities rather than playing basketball or whatever? Or is there a message of, the cycle won’t end until someone breaks the silence and speaks up?

I just finished watching this episode and needed to see any review of someone saying this is too much too fast for a series. This review popped up first.
I’m overwhelmed.
Jerrika and Brandon just about the only ray of sunshine on the series and now they’re on pause.

I feel like this show is trying way to hard to push an agenda, as opposed to actually give us a real idea of what’s going on in Chicago. Four thousand people weren’t shot over misunderstandings and accidents…growing up in the hood means, you know damn well not to take a chain and shoes off a dead body, and then run around with the CHAIN on….not snitching doesn’t mean, don’t talk to the cops, but talk to random strangers and tell them who you saw shot who. Nothing feels real.