Everyone’s face after Jerrod lets his friend call him his N***a.

What are the rules of Black culture, much less the exceptions for white people saying the N-word? Said topics make for a weak episode, but I suspect the shooting one was supposed to be the peak before mundane topics.

While Bobby buys stuff for Joe and Cynthia’s sex life, Jerrod and Maxine buy her a book. Thus setting off the things most Black people don’t do. Of which include reading, skiing, driving Subarus and other nonsense. Heck, just to drive the point home, Cynthia notes how much The Cosby Show was like her Star Wars. Something futuristic and foreign.

A lot of this episode is about cultural and generation gaps within the Black community. Hence the mention of The Cosby Show. While normalized for some, it is a foreign life for others. So while Joe and Cynthia look middle class, they can’t, or couldn’t, identify with what Bill Cosby was selling. Yet, for Jerrod, who went to an interracial school [note]With just with that being noted should say something about where Joe and Cynthia live.[/note] he got it. For while his family wasn’t poor, he was probably exposed to something better. Something beyond their, for a lack of a better term, average lifestyle. 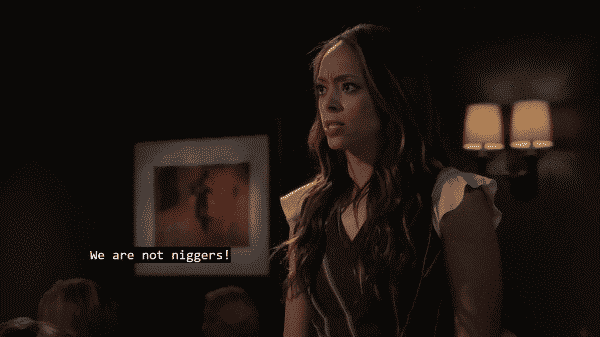 It’s Cynthia’s birthday and Jerrod wants to shake it up. He has money, knows a few people, so he wants to take her to this fancy restaurant Florentine’s. That is, as opposed to Niecy’s which they have gone to for years. However, there comes a problem when Jerrod’s friend Drew (Drew Michael) greets him in a Black colloquial way. Meaning, calling him his N***a. This is triggering for the whole family and each have their own story dealing with it.

For Bobby, he talks about a high school friend named Kevin who got called the N word. Which led to him beating the white boy until he is unrecognizable and messing up his entire life. For Maxine, she got called the N word before a state swim meet and it caused her to lose, hate swimming, and quit. Though the one which is perhaps taken the most seriously is Cynthia’s story.

In the 5th grade, Cynthia was the sole Black person in her class. Now, basing this on Loretta Divine’s age, that would mean she was in 5th grade in 1960. So, as you can imagine, being one of the first to integrate her school, the N word was through around a lot. Probably to the point you’d think it was her chosen nickname.

So with Drew saying it, while everyone may love the ambiance and service of Florentine’s, they have to go. Especially since Maxine decides to cause a scene with Drew. 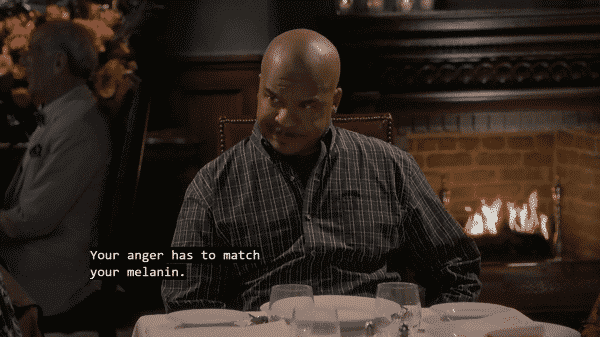 Joe (David Alan Grier) in “Cynthia’s Birthday” on The Carmichael Show. He is referring to Maxine’s anger.

What I like about this show is that if you really pay attention, you can see the pain behind the laughter. Like with Cynthia and Joe not reading. Much less the idea of Black folk not liking to read. It is something which is passed down due to ill treatment. Because Cynthia and Joe went through, they didn’t take up reading. So, with that, Jerrod and Bobby were never exposed to it at home.

However, being that Jerrod went to a school which was more mixed, it seems that spell, curse, or what have you, was broken. He possibly got exposed to homes which had libraries of books. Maybe even, at school, had teachers who fostered a love for reading? I mean, the big idea here is how something can become a norm in a culture.

Now, as for Drew saying the N word? That whole conversation is where I wish Nekeisha wasn’t a character who drops a line, a funny face, then storms out. For I’m of the opinion she would have been the best one to counter Jerrod. Maxine is too bougie and making it about her to consistently give good counterpoints. Bobby has his moments, but mostly is comic relief, and the generation gap makes an impasse when it comes to Joe and Cynthia. Nekeisha though, being that she is an around the way girl, to me, she could bring up Ice Cube type of counterpoints. [note]

What I mean by that is, Nekeisha seems to be like Jerrod in terms of getting along with everybody. She is someone I can see having White friends, Black friends, listening to Rap and understanding where Jerrod is coming from. However, unlike Jerrod, affluence hasn’t touched her in a way which would make the N word feel less of a slur. So rather than the usual standstill most conversations have on this show, I feel her point could sway him.

Mostly because, there is less of an ego investment there. With Bobby, Cynthia and Joe, there often feels like Jerrod has to show off. Be it his trophy Maxine, his lifestyle, or that he is more worldly or intelligent. Which isn’t to say he is arrogant, but definitely isn’t humble about what he has accomplished.

Then with Maxine, I feel that he does sort of emulate his dad in a way. Like, he wants that relationship where he maybe questioned, but not outright challenged. If not they are simply more so on the same page than butting heads.

But with Nekeisha, who is she? With her, while less educated, with how she comes and goes there isn’t as much of a reason to care. Which, for this show, gives him an out since it isn’t like someone is going to say “Remember when?” Since the past is quickly forgotten once someone yells “Cut!”[/note] 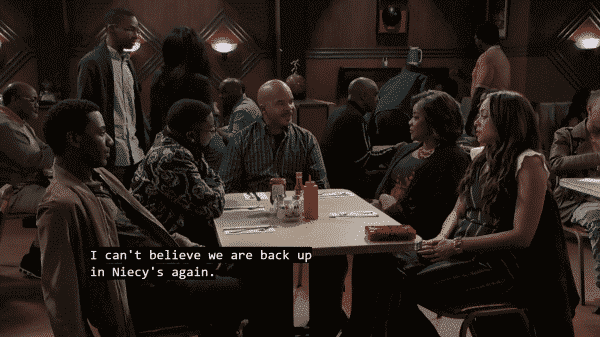 The episode ends with everyone at Niecy’s and Cynthia missing having good service. Never mind fancy things like sparkling water.

The words “That’s racist” pop up a lot in this episode. So can someone call out the show for having a Black restaurant with a terrible server as racist? Granted, I’ve been to a handful which are like that but, come on!