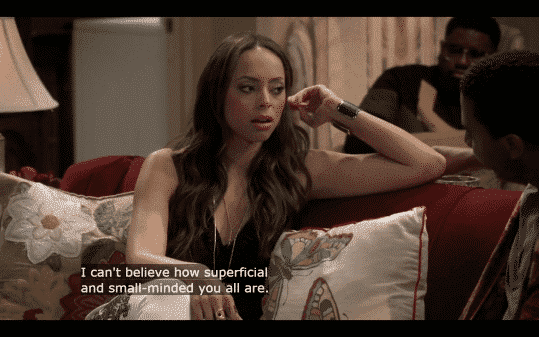 With Bobby not wanting to go out with Maxine’s friend, because the family thinks she is unattractive, so begins another Maxine vs. the family moment.

Am I a Three?: Bobby, Maxine, Joe, Cynthia, Jerrod

Cynthia’s niece is getting married and with that, naturally, she is showing up with her family. Granted, her niece is lesbian and Cynthia’s family seems universally conservative, but family is family. But a problem arises when Bobby has no one to go with. For with Nekeisha having this guy from UPS, Bobby is solo. He doesn’t want to go to a wedding solo.

So, Maxine sets she’ll set him up. This seems fine at first but Maxine is noting how smart she is, she has a Ph.D., how kind she is, and this raises red flags. So a picture is requested and she is considered a three on a ten point scale.

Naturally, this offends Maxine and Jerrod, promptly, puts his foot in his mouth. For he notes, alongside Joe, how important looks are. No one is jumping at the opportunity to talk to someone based on personality. Jerrod even says it took 10 weeks for him to get passed Maxine’s attractiveness to become attracted to her as a person. Which of course offends Maxine and makes her think everyone is shallow.

Of which they are and with Bobby being paired with a three, this hurts his feelings. To the point he tells Maxine he doesn’t want to go with her friend because of the fear of embarrassment.

Focusing on Bobby, because Maxine can be focused on in the next topic, I find it interesting that Maxine took Bobby as someone who wasn’t shallow. I really don’t see anything about his character which doesn’t make him seem shallow. He posts pictures of himself constantly, trying to get likes. The girls we have seen him with have all been attractive, so where is this coming from? Is she seeing Bobby through Cynthia lenses?

Much less, why is she even shocked anymore with this family? She has been with Jerrod for years now so surely she has learned to expect the worse by now right? Or is she more naive than previously thought?

See Me For Me, Not My Beauty!: Jerrod, Maxine

Maxine is really upset with Jerrod about how much her beauty was a hook for him. So, to prove a point, she goes to the wedding with a smock and with no makeup. Yet, despite not trying, she still gets compliments and Jerrod wins bets. For, in his own words, Maxine is his trophy. Which, of course, adds fuel to the fire.

Yet, what isn’t’ strongly talked about is the stuff you could side with Maxine on. She doesn’t really push the problems of cat calling or unsolicited phone numbers, she harps on people being shallow. Which makes it so even Nekeisha, who wants to be on Maxine’s side, has a hard time. But in the end, Maxine comes to accept she has a certain amount of privilege and that people are shallow. Making for a fight she could have won ending in defeat due to lack of strategy.

Can we flip the script a bit? Maxine brings up body issues and things of that nature, but why is she with Jerrod? Not to shade the man but was it looks that attracted her or was it the fact he had his own home? Was it because, while dysfunctional, he had a family which was inviting even if she is committed to being a black sheep? Could it be because he has a good job? Strangely, Jerrod doesn’t bring any of this up. He remains squarely on the defensive and doesn’t question Maxine’s reasons for being with him at all. Much less bring up male insecurities, which Bobby could have played up.

But lest we forget, is it really wrong it took Jerrod ten weeks to see beyond Maxine’s beauty? For wasn’t she technically cheating on her last boyfriend with Jerrod for around the same amount of time? Also, why not wear a hijab or the conservative Muslim garments if she wanted people to focus on her personality or intellect? Granted, that would bring up a whole other issue for the show to discuss, but Maxine could have broken it down.

In general, though, I feel like this episode has a lot of missed opportunities. And also, I was kind of left wondering if the guy in 4D had his scene cut since it seemed like he was going to say something. I can’t be the only one who thought that right?