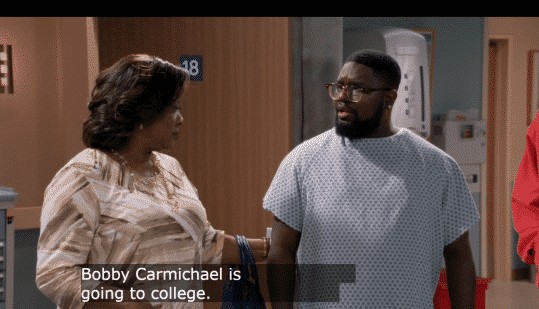 With getting electrocuted, and meeting a former classmate who is a doctor, Bobby seems to want to take his life seriously now. The only problem? He is a Carmichael so he gets absolutely no support. Except from Maxine.

We learn Bobby has, in fact, kept his super job, and because of it, he gets electrocuted. With that happening, so comes the idea he needs to find something else to do. Especially since a former classmate of his, Dr. Darnell Hunt (), is now a doctor. With seeing this guy he went to class with get so far, Bobby gets feelings of inadequacy. Which, when combined with what Nekeisha puts on Facebook, which makes people think Bobby attempted suicide, leads him to the decision of going to college.

Something that no one in his family supports, but Maxine does. Especially since Bobby would be the first of the Carmichael family to go to college. However, with no support from Joe, Cynthia, Nekeisha, or Jerrod, it seems Maxine will be left to bolster Bobby’s spirit about this college thing.

Jerrod didn’t go to college? That was probably the main thing I was thinking about throughout the whole conversation. That and questioning what Jerrod does for a living? For while I get this is a Bobby focused episode, I’ve given up on Bobby like the rest of the Carmichael family. I mean, the fact he still had his super job was a surprise to me.

But, looking a little deeper into things, do you think Joe and Cynthia beating him down isn’t the only reason Bobby is kind of a mess at 34? Depression surely is a factor, but with the way they talk about how he wrote in the 3rd grade, maybe a learning disability should maybe be considered as well? I’m not a doctor so I can’t say this is facts, but it seems plausible.

I Thought We Were A Team: Bobby, Maxine, Joe, Cynthia, Nekeisha, Jerrod

Despite how doting Cynthia can be on Bobby, and even how often Bobby takes Joe’s side, he feels like a sort of outsider. So when Maxine was officially introduced into the family, he felt someone could understand him. For while Bobby may often walk off his parents coming down on him so hard, it still hurts. So with Maxine getting the same treatment, and looking a bit devastated sometimes when it happens, it is like they are kindred spirits.

Yet, there is something that makes Bobby pursuing a career in being a therapist which shocks her a bit. Maybe because everyone touts it as something so easy. But, either way, she finds herself wanting to dissuade Bobby from this idea. Especially since he has quit his job so he can be a full-time student.

However, with Maxine admitting she wanted to be a veterinarian until she learned she had to kill animals, and her looking into Bobby’s puppy eyes, she couldn’t kill his dream. At least outright. For once she starts talking about the people she works with, it is over for Bobby. He taps out and decides to become a barber instead.

Emotional intelligence. That is something Maxine realizes Bobby has and what truly leads her to turn around and support him. Which, sort of helps remind you academic intelligence, be it writing or arithmetic, isn’t the only way to measure someone’s chances of success.

Now, granted, Bobby being a bit of a lazy bum doesn’t help things. But there may just be potential yet. If only his family consistently supported him rather than selectively did so to the point Bobby ends up remembering more put downs than them raising him up. But, when in need, he can always turn into his eventual sister-in-law Maxine.

This is assuming her and Jerrod eventually tie the knot.