Wherever I Look
Recaps, Reviews, and So Much More
Home TV Series The Boys: Season 1, Episode 8 “You Found Me” [Season Finale] – Recap, Review (with Spoilers)
TV Series

The Boys: Season 1, Episode 8 “You Found Me” [Season Finale] – Recap, Review (with Spoilers)

How does a show like The Boys do a finale? Well, by killing characters you’d never expect and ending on a reveal which may actually shock you.

The Planned Worked For Many, But Not All: The Deep, Homelander, Billy, Madelyn, Susan, A-Train, Mr. Edgar 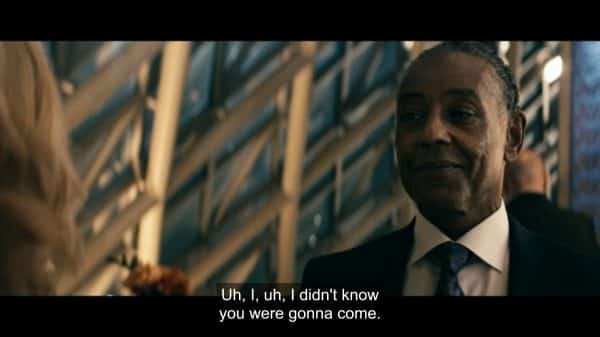 When it comes to there being terrorist out there with access to Compound V, that is thanks to Homelander and A-Train. They are what saved the deal and negated all Billy and Susan had planned. But, while the moment is widely celebrated, for it brings in over $30 billion, not everyone benefits. Yes, Homelander can now operate in places like Syria but those like The Deep? He is still stuck out in the Midwest being punished.

But, at least for some, like Madelyn, their efforts are recognized, and it seems not taken lightly. Hence why Mr. Edgar makes it clear she is being groomed to replace him when he retires.

As Billy and Hughie head out to see Grace, M.M., Frenchie, and Kimiko are taken in by either the US government or Vought security. Making it so Billy needs Grace’s help more than ever, but she wants no parts of it. She lost her family and took the opposite approach that Billy decided on. Lamplighter hit her hard, and she stayed down. Which is what she recommends to Billy and what she recommends to Hughie. However, Billy can’t stop. So, to keep him from ever coming back into her life, Grace gives Billy a name to use and sends him off. But, with what Grace says, and Billy making it clear he has no intention of rescuing M.M., Frenchie, and Kimiko, that seems to be the end for Hughie. Well, at least the end of him working closely with Billy anyway. Which is why he approaches Annie to help but with her having an out with her mom about being drugged and how that led to her not having a real childhood, Hughie is asking a lot. Nevermind her feeling like this request to help is just him trying to use her again.

Which is probably why she decides to drink a bit too much at a Vought party and Maeve pulls her to the side. You see, Maeve can recognize the path Annie is heading on for she is following in her footsteps. This isn’t something she wants to see since Annie, while annoying, is still pure in some ways. She doesn’t want her to lose that to the business so she pushes her be herself rather than who Maeve has become or who Vought wants her to be. Which is probably why she ends up saying Hughie and his friends. Well, that and Hughie has a place in her heart. He felt saved by her in that bowling alley when he was ready to dive off a cliff and reminded her being a hero is what she signed up for. Not to represent a rather evil international business.

But things aren’t easy for them. With Billy’s team being fugitives, it means they are going to remain on the run for a long time. On top of that, A-Train finds them and with him still pumping Compound V, despite his brother, Nathan, protesting, it seems they are doomed. At least until A-Train has a heart attack. This leads to Annie realizing, despite how dumb the decision may have looked for a moment, she made the right one. For even with knowing A-Train would probably hunt him down for the rest of his life, Hughie tried to save him. So maybe, despite it all, he is a good guy. Just one caught up with some psychotic people. Oh, and speaking of psychos, here is something fun, Billy goes to Madelyn’s house and wraps her in explosives. He then has Homelander come by for he plans to kill her in front of him just so he can live with that pain for the rest of his life. Thing is, as Homelander has made clear, he doesn’t like liars, and Madelyn told him a major lie. In fact, we, the viewer, were lied to as well. Hence why Homelander kills Madelyn himself. Then, when Billy tries to blow up himself, Madelyn’s corpse, maybe Madelyn’s baby, and Homelander, he finds himself on grass.

Nope, not grass at the gates of heaven or hell, but grass in front of a nice house. One which has this blonde kid running towards Homelander and then Becca close behind. For, you see, Homelander’s son didn’t die during childbirth – he is alive. It’s just he, unlike Homelander, is experiencing what it would be like to have a maternal figure in his life. And as Homelander shares a moment with his son, Billy looks at Becca shocked, and she appears unsure of what to say.

The Fact Amazon Has Already Renewed The Show For Another Season

Let’s unpack: Homelander has made it so multiple terrorist cells have Compound V. Also, not only is Becca alive but she has Homelander’s 8-year-old son in her custody and has been raising him in secret – a secret Billy now knows. Madelyn has been murdered by the person she has been coddling and covering for since, who knows when, Annie helped fugitives escape, which A-Train knows, and thanks to there now being super terrorist, heroes damn near have a get out of jail free card.

Needless to say, we got dumped with a whole lot to think about between now and season 2.

So, About All These Terrorist

You gotta love how they introduce a nuclear terrorist in one episode, and we don’t see him in the next at all. I get they are going to become the major issue in season 2, but surely they could have featured Naqib and the many others more. Maybe even, in homage, during an end credit scene.

Here is the thing, did I expect Becca to be alive or Madelyn to die? No. Yet, the twist and shock just didn’t hit as hard as it probably should have. Maybe it is because the show somehow has found a way to present the unexpected yet make the unexpected not seem like a big deal. Almost as if it operates on “The world has superheroes in it and someone not being dead or someone being killed is a big deal to you?” Like, of all things, that is what would shock you after seeing people lasered in half by both a grown man and, earlier in the season, a baby?

Which isn’t to say I’m not interested in seeing the ramifications, it’s just so much has happened up to this point that I’d say the death and reveal allowed the show to plateau more than spike.

Did I think she was going to join Billy and get revenge? No. But there was this hope maybe we’d get a flashback and see the mission where everything went wrong. See that divergence that led to Grace stopping but that just strengthening Billy’s resolve. Even as his team fell apart.

The main thing I want to know with Black Noir is whether we are supposed to see him as a joke or not? After the Kimiko fight, I thought he was going to be made prominent in the search, capture, maybe death, of The Boys and yet instead he just awkwardly appears as he has done since the show started.