Wherever I Look
Recaps, Reviews, and So Much More
Home TV Series The Boys: Season 1, Episode 3 “Get Some” – Recap, Review (with Spoilers)
TV Series

Billy expands the team by one, and as he does, he stumbles upon Compound V and a new asset.

With finally having some kind of lead, and dragging Frenchie back into the fold, Billy thinks it is time to get the gang back together. Hence him pushing Mother’s Milk (M.M), now a youth corrections officer, to leave his job, anger his woman, and link back up. Which, it should be noted, isn’t an easy thing. Mother’s Milk has beef with Billy that isn’t resolved and with M.M. accusing Frenchie of the whole Mallory situation, it makes them have an “on sight” type of relationship. But all is cooled out as plans are revealed and goals align.

The Life I Could Have Had: Hughie, Popclaw, Annie, Madelyn, Billy, Frenchie, A-Train

One of the leads Billy got before Translucent was killed, stuffed into a zinc suitcase, and thrown into a body of water, was Popclaw dating A-Train. Now, who is Popclaw? Well, she is a B-Team hero who has done movies but seemingly isn’t working enough under the Vought umbrella to keep up with rent payments. On top of that issue, A-Train keeps her a secret, and we learn Madelyn has some realm of control over who dates who. Showing you how daunting it must be to be a hero.

But Popclaw isn’t the only one suffering. Annie is forced into a more revealing outfit, and A-Train learns that if he loses a race for the fastest man in the world – he is off The Seven. Thus he uses Compound V, a steroid for heroes, to win his match and throughout the latter half of the episode, Billy and his team try to get it. However, all that happens is Hughie and Annie reconnecting and the crew watching Popclaw smash her landlord’s head as he is eating her groceries. Which gives Billy an in so that he can learn more and expand operations.

It’s not until the end of the episode The Deep discovers Translucents remains, and until then, Homelander seems to be the only one worried. Maeve doesn’t care about anything, beyond keeping her numbers up and Homelander acting possessive. Then with Madelyn, until she gets Billy’s message of more of her team being threatened, she too hunches off Translucent not showing up. After all, we saw him naked in the bathroom, the man is a perv. But with his remains comes a realization a red alert needs to be sound. However, only internally since the military bill just came out of committee and the last thing Madelyn would want is for that to be messed up.

They’re just cute. Not on the level of #Goals, not forced together just so we have at least one couple, they are just simple and cute. Which, with this show, probably means they won’t last.

Understanding The Relationship Between Heroes & Vought 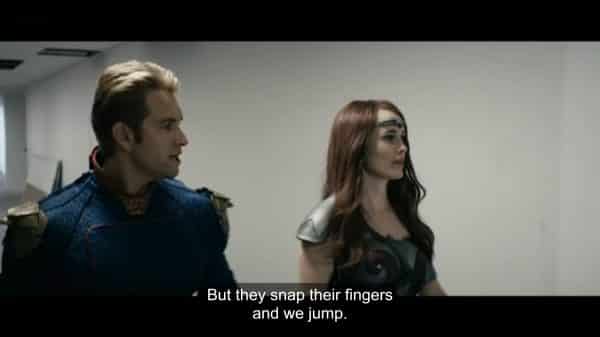 It’s a very interesting thing to see Supers from Popclaw all the way up to Homelander at the beck and call of those like Madelyn and unable to do anything. Popclaw, for whatever reason, can barely pay her rent. Homelander, despite making billions, seemingly can’t transition and take on a more business role. Leading to you really having to ask, when the guy who Annie replaced “retired,” how did he do that? Is there a 401K plan? Did they save their money? For with the way A-Train was going to be tossed aside, it makes it seem that Vought is as cold-hearted as most conglomerates seem.

Leaving, again, this need to question whether they have any competitors and also, where are the supervillains? For I’m sure between Madelyn or someone else, there has to be at least one who got pissed off and decided they wanted revenge. Just what we’ve seen Annie go through plants the seed for a supervillain. Never mind I doubt heroes are just born in the US, what about heroes born under dictatorships and in parts of the world the government is underfunded, or too corrupt, to keep a super from taking over or being someone’s right hand? But that’s a whole different thing.

Already Desensitized To The Violence

With two episodes featuring characters exploding, and now Popclaw destroying someone’s head like her thighs were a nutcracker, the violence has officially gone past a tipping point. So here is hoping no one thought some grotesque imagery of mutilated bodies would be a selling point for the whole season.

Understanding The Relationship Between Heroes & Vought - 85%

Already Desensitized To The Violence - 70%