Wherever I Look
Recaps, Reviews, and So Much More
Home TV Series Station Eleven: Season 1/ Episode 2 “A Hawk From A Handsaw” – Recap/ Review (with Spoilers)
TV Series

Station Eleven: Season 1/ Episode 2 “A Hawk From A Handsaw” – Recap/ Review (with Spoilers)

The show shifts its focus to make it clear Kirsten is the lead as we bounce back and forth between 20 years in the future and around Day Zero.

The Past – Jeevan, Kirsten, Frank

Within days of what becomes known as “Day Zero,” Kirsten learns her mother is dead by text, and it is assumed her father is dead as well. This is, of course, devastating as she just lost her mentor, Arthur, days before, tragically on stage, and now all she has is this man she just met and his brother. Who, with the way the flashbacks make it seem, alongside seeing Kirsten on her own for and looking feral, likely will die too.

Two years after “Day Zero,” we find Kirsten looking feral, wandering about, and she comes to meet Sarah, aka The Conductor. Initially, their encounter isn’t friendly, as Kirsten keeps a knife handy for any and all human interactions. However, Sarah befriends her and introduces her to her group, the Traveling Symphony, which often does Shakespearian plays. As you can imagine, this seems like a dream for Kirsten, a Shakespearian-trained actor.

And, lo and behold, for the next 18 years, Kirsten travels with Sarah, the director Dieter, alongside a young girl named Alex, and another actor named Charlie, and many more. They have become her new family, and while safe in her community, Kirsten has never moved far without access to a knife. Case in point, a person who claims to be part of a Hamilton production, David, stops by during a performance at St. Deborah By The Water. Kirsten is suspicious of him due to his lies, but with Alex being someone born within the last 20 years, innocent and naïve, Kirsten doesn’t harm David on sight.

But, besides being a protector, Kirsten is one of the company’s most well-known performers, and despite not being in St. Deborah for more than a year, both adults and children ask for her and hope to see her. Beyond her performances, Kirsten also focuses on Charlie, her best friend, and ex-girlfriend.

Also, sadly, due to giving birth, she is someone who plans to take a year off. Which perhaps was a factor in the Traveling Symphony accepting Dan, who has auditioned multiple times to join and was rejected by Dieter? Well, that and many unable, or unwilling, to put on a production of Hamlet for the good people of St. Deborah.

One of the things you can’t do to someone like Kirsten is lie to them. They’re an actor, they lie, play pretend, whatever you want to call it, for a living. And with the way she performs, with it being about the other person, it makes picking up a tell quite easy and what really tripped David up was him telling the kind of lies which couldn’t be considered slips of the mind.

Though what could have been the nail in his coffin was mentioning a prophecy, and with a symbol popping up, that seems like a warning sign, and David presenting the threat of Kirsten’s friends disappearing, she decides she needs to stab David. Now, she doesn’t stab him to death, which she may come to regret, but he was within earshot of the camp if he decided to scream or yell, so she wasn’t necessarily trying to be overzealous. Plus, dead bodies usually attract fear.

Either way, with multiple tattoos on her wrist with the symbol of possible religious fanatics, it seems Kirsten wasn’t joking when she said she has killed before, and seemingly she will kill again.

Survival is insufficient.
— Patrick (During Decode)

We need not just entertainment, we need art.
— Patrick (During Decode)

In a strange way, Station Eleven seems to want to present the idea that things could be worse. Granted, the source material was released back when then-President Obama was warning of pandemics, and the world wasn’t under the thumb of one, but still. What we get from Kirsten helps you understand the shift that comes from living through a massive pandemic at a young age.

For whether it is seeing her lose her parents and knowing she’ll lose Javeen and Frank opens you up to understanding why she has abandonment issues and is capable of the violence we see. Especially since, after a certain point, be it the world or people taking things from you, you want to at least make it harder for whoever or whatever.

Which makes you wonder, considering we’re told Kirsten had at least two relationships, one including Charlie, how was she as a partner, and why didn’t the relationships last? Also, do they foster this more violent but protective side of Kirsten between Sarah, Dieter, and the rest? Because, strangely, for a post-apocalyptic show, we only see one gun and very few weapons. And while Kirsten talks about securing a perimeter, it seems she does this alone as everyone else focuses on putting on a show. 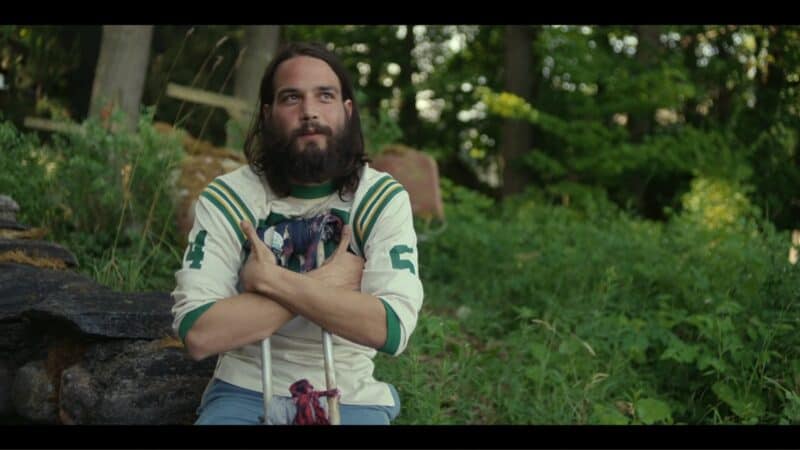 Come on, what’s a post-apocalyptic world without cults of a fanatic variety, right? Now, granted, we don’t know much about the one David was in or the gentleman from the Museum of Civilization. However, clearly, Kirsten has a history with them and, as a potential warning, the same way gang members have tears noting how many they’ve killed, Kristen has tattoos on her hand noting how many died, likely by her blade.

So it should be interesting to see Kirsten’s initial introduction to these groups and how she learned to become a killer without much in the way of remorse.

Beyond not liking Shakespeare, it isn’t 100% clear why Dan failed to be well-received during his 4 previous auditions. However, Kirsten’s advice about focusing on the other person, and just how she talks about acting, shows you why so many, across the world, know and like her as a performer, and I thought it was a nice touch. It helped you realize, as a performer, a protector, and a friend, she is well balanced, despite the trauma we’ve seen her experience. Station Eleven: Season 1/ Episode 2 “A Hawk From A Handsaw” – Recap/ Review (with Spoilers)
Trajectory: Plateau
Station Eleven is still in that space where it is developing its potential rather than showing its potential realized or presenting you with disappointments.
Highlights
Trauma & Response
Cults & Dangerous Figures
Kirsten's Acting Advice
Disputable
83