As all signs point to Adora, there remains the question of – not why she did it, but more so how?

Table of Contents show
1 The Past Repeating Itself/ So You Don’t Need Me Anymore?: Adora, Amma, Camille
1.1 Commentary
2 Too Close To The Subject: John, Richard, Camille, Ashley, Chief Vickery
2.1 Commentary
3 Crimes of Passion: Jackie, Marian, Camille, Adora, Amma, John, Richard
3.1 Commentary
4 Question(s) Left Unanswered
5 Collected Quote(s) & .Gifs
6 Highlights
7 On The Fence
8 Follow Wherever I Look on Twitter, Like us on Facebook and Subscribe to the YouTube Channel.
8.1 Previous Episode’s Recap
8.2 Check Out Other TV Recaps

The Past Repeating Itself/ So You Don’t Need Me Anymore?: Adora, Amma, Camille

Another day, another hungover Amma for Adora to take care of. Which of course Camille gets blamed for. But, before Adora’s daily dose of considering Camille to be the root of all her problems, she is actually quite kind to her. She seemingly found her injured, brought her to her bed, changed her out of her clothes, and tries to seriously take care of her. I’m talking wrapping her ankle and give her some medicine she concocts. Nothing you’d get out of a drugstore – it’s just some crushed up pills and some kind of liquid that isn’t straight water. A drink, even as a child, Camille refused to consume.

However, when it comes to Amma, she is much more willing to let Adora baby her. Especially if she threatens all the privileges Adora provides. Camille, so it seems, had no problems being independent and, even if she did suffer a lot, still stick up for herself. As shown though, Amma is a lot of bark and little bite. So her standing up to Adora, saying no, not placating her? She doesn’t have the fortitude, which could lead to her doom. 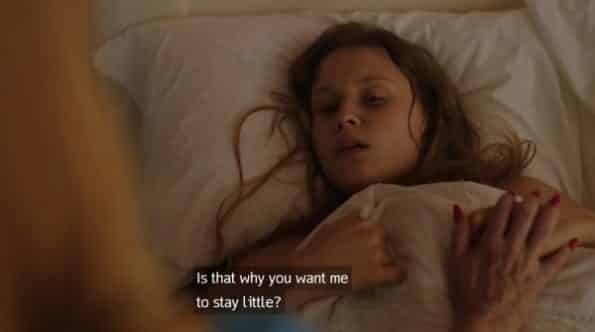 Amma: Is that why you want me to stay little?

Two words: Generational trauma. As noted by Alan, Adora had a real tough time with her mom and sought starting over with her girls. Problem is, she never dealt with her own stuff to provide the life she wanted to give. So while she may not have been as bad of a mom as her own, like with the pinching and all that, she was still cutting with her words and emotionally absent, if not abusive. At least in the form of denying Camille when she needed comfort. Like her pushing Camille away at Marian’s funeral and basically treating Camille like she was the product of something horrific.

With that said, what in the heck is in that mixer? Also, what doctor is prescribing these pills and how did Adora come up with this concoction? One, even when we see Adora not in the best shape, you sure as hell don’t see her drinking. Something is off here and while I take note of how Adora got issues because of her momma, I wonder if that is really enough to attempt to explain what is going on here.

Because Camille is so cagey, and Adora is pretty much untouchable, Richard continues to dig into that family – Marian in particular. Leading him to find out her records were all types of inconsistent. From a million and one tests were done, and her paperwork changing depending whose hands were on it. Then, when one nurse seemed to call out the situation, or maybe just told the truth, it ruined her.

But, while Richard is doing that, Camille finds John, who is pending arrest, on the side of town where white people seemingly don’t live. During that time, she first approaches John like a subject who she is just trying to get the truth out of. However, he is tired of her games, Ashley’s desire for fame, and just the whole thing. He even talks about suicide. However, Camille talks him down off that ledge. Be it sharing a dead sibling or maybe sexual attraction, she tries to help the boy.

In fact, she does with him what she didn’t even let Richard do – look and read her scars. This intimacy leads to them having sex and damn if the Chief and Richard don’t bust in on them as they both are getting dressed. Leading Richard angry at himself, and her, and the Chief letting it go since John is of age. Plus, Adora might have blocked him anyway.

Okay, how rich is Adora exactly? How does she have this level of influence? I get, as the owner of the pig farm, she is probably one of the biggest employers around. Also, with this being the Midwest, a small town, her money has more power than if she was in a city. However, are you telling me she was truly able to pay off countless nurses and doctors to look the other way whenever she nearly killed her daughter thanks to her latest concoction? Also, did Alan or anyone else know about this? Well, we know Jackie knew something but more on that in a minute.

That aside, what was the point and purpose of Camille sleeping with John? Is this supposed to show, like Adora, all Camille wants is intimacy and affection? Perhaps being seen and accepted despite her scars? Which, for Adora, are internal, and Camille, both internal and external. Also, if John said he was 17, you think Chief Vickery would have had Camille arrested? You know he does not like her, as he doesn’t like any outsiders. Maybe women who aren’t domesticated and feel less than to him as well. However, would he really risk upsetting Adora?

And as for Richard? You got to wonder if Camille acting as she did will lead him to take ugly gossip about people in the town more seriously. For it seems some of the rumors he hears, especially dealing with people and their dark stuff, seems to be true. So will he come across the truth, as he digs into Marian, or will he clean his hands of Wind Gap?

It has been a bit of a murky road in trying to be able to firmly say: They did it. However, between John, Jackie, and Richard, all signs point to Adora. John provides us with details that Natalie and Ann fought off Adora’s advances and probably, similar to Camille, weren’t all that found of Adora coming around as she did. Likely when low and looking for a pick me up. Natalie even left Adora with the need for stitches.

Following that, we have the aforementioned Richard investigation into Marian where we learn about “Munchausen’s by proxy.” With this disease, the caregiver seemingly tries to maintain the power dynamic and the patient’s need for their care. Hence Adora giving Amma something which made her vomit up chunks, trying to make Camille drink the same stuff, and it could very well be what killed Marian. For Marian was so malleable to her mother’s whims, she didn’t fight it. But, let’s just throw in that Adora’s relationship with Marian was twisted before she started giving her this “medicine.” There is a scene showing her biting Marian, as a baby, and not in a cute way but looking like she wants to consume this baby like a cannibal.

But the icing on the cake is Jackie. This whole season it was never clear what Jackie’s purpose was on this show. All we saw her do was drink, side eye things, and be nice, but a little shady, towards Camille. In this episode her purpose is revealed as her knowing Adora was doing what she did but, because of Adora’s power and influence, never saying anything. Instead, she tried to get medical records and tests done to get proof. All of which were denied and likely how she and Adora went from being best friends to giving icy stares.

All this information, now of Camille’s knowledge, leads her to want to save Amma from her mother. But, the question is how? Will she attempt to expose her own mother or try to take the thing which gives her a reason to live? Hopefully, the season finale will answer these questions. Jackie: I did what I could.

So, basically, if I watch something dealing by Gillian Flynn, should I just expect a crazy woman did it? Is that the gist here? Because between this and Gone Girl, I fully think Flynn likes writing bat s*** crazy women. Especially the kind who are made to be someone you’d never suspect. That it would be unheard of for them to be some kind of evil.

But, let me tell you, Adora is some kind of evil. Poisoning your own child due to your insecurities? Then involving yourself with other people’s kids to either atone or because you don’t want to inflict the same level of pain on your own child? I can’t even begin to fathom how this is going to end. I doubt with someone else dying but, just for kicks and giggles, that might end up happening here. Urgh, next week can’t come enough.

Hold up! Before we move on, Jackie needs to be addressed. What does this woman do with her life besides drink and take pills at random? We never see a husband, we don’t see her work, and it isn’t clear if maybe she is part of Adora’s family and thus gets a stipend from the pig farm. How exactly is she connected to everything? Because, taking note of how Adora ruined that nurse’s life, I feel like she would have probably done the same to Jackie if there wasn’t something keeping her from doing it. The question is, is it knowing the truth about Marian or something else?

“Your health is not a debt you just cancel. The body collects.”
—  Adora

I never thought she was bad. She was just completely herself.
— John