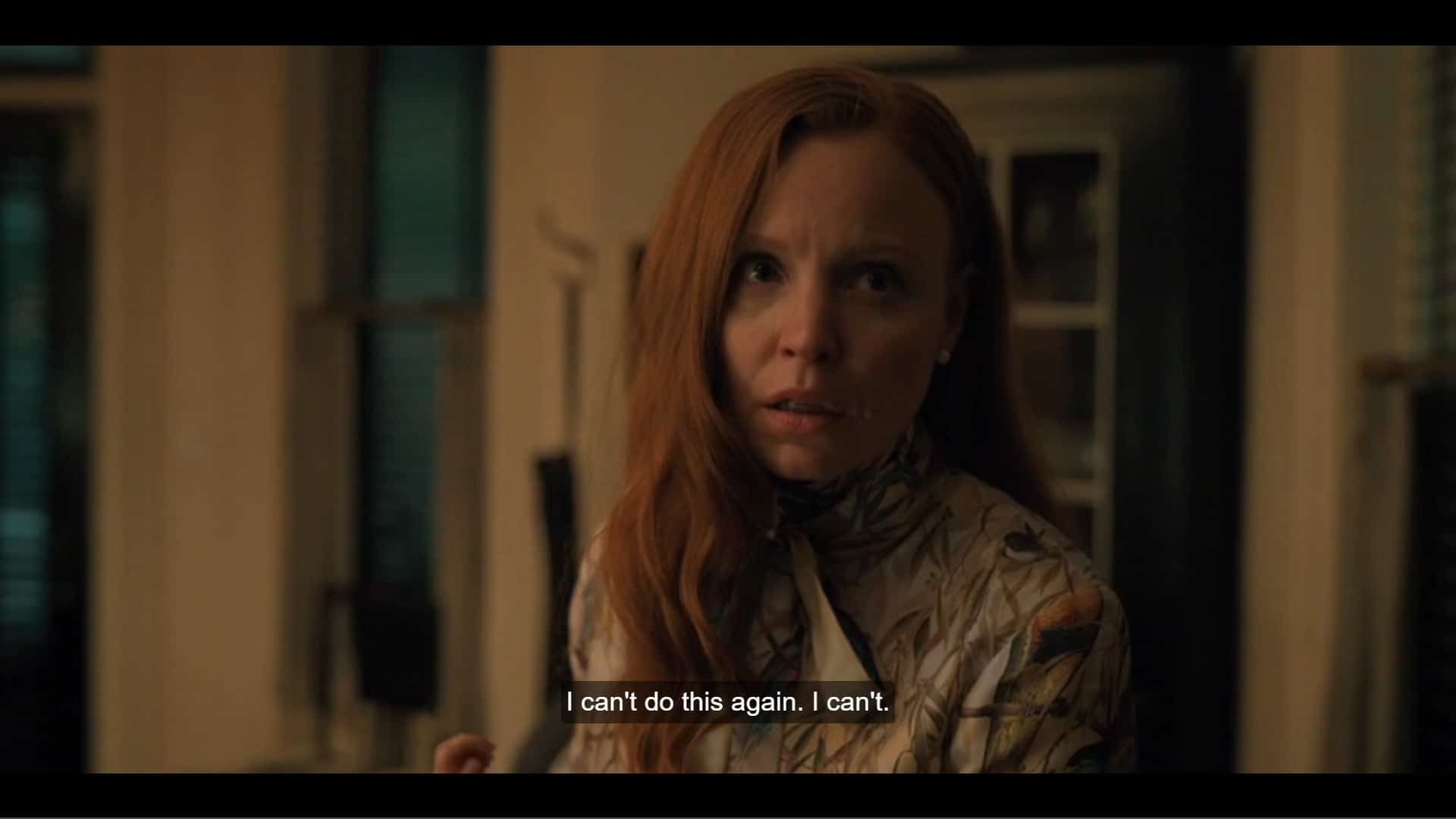 Dorothy decides it is time for Leanne to prep for her next venture, and it seems no one is on her side about that.

Dorothy is uncomfortable and fearful of Milo and the rest of the homeless people in the park, especially because their numbers are rising. Yet, due to building a relationship with them, Leanne doesn’t feel the same way. If anything, she wants to be closer to them and even introduce Jericho. This confuses Roscoe, who for some reason is amongst the homeless, asking Milo questions about Leanne and all that is going on. But, before he can get notable answers or we can hear the people say more to Leanne beyond praise, Dorothy storms out there, snatches Jericho, orders Leanne back in the house, and reprimands her. In fact, she forbids Leanne to go to the park and interact with those people, especially since she sees Leanne as a beacon for cults and wants her child no part of that.

This Isn’t Up For Discussion – Leanne, Veera, Sean, Julian, Dorothy

But with Leanne playing down Dorothy’s concern, it seems Dorothy is done. Leanne won’t listen, Sean won’t support her, so she works with Veera to get Leanne into a two-month dance program. Leanne, shocked by it all, says nothing, and Sean doesn’t know until things are done and Julian when Leanne is supposed to be on a train heading to New Jersey.

Naturally, Julian protests, but Dorothy clarifies to him, as she did Sean, this isn’t up for discussion. For Dorothy, Leanne gives her too much anxiety to have her in the house and add in Leanne is drawing pictures of Dorothy’s most embarrassing moments and is picking at her? No. She can’t stay in the house and continue to present a threat to Jericho and Dorothy’s sanity.

My Presence Is A Gift And Absence A Curse – Leanne, Veera, Sean, Julian, Dorothy, Tobe

It should be noted Leanne doesn’t fight Dorothy trying to kick her out. She does appreciate Sean and Julian saying something on her behalf, however. So, one by one, she hugs them, kisses Jericho on the head, hugs Dorothy, closes her eyes while hugging her, and steps on the porch, where Tobe is waiting to take her to the train station. But no sooner than Leanne steps outside, Jericho is back to being a doll, and Dorothy is flipping out. As this happens, Leanne just stands in the rain, and it isn’t until Veera has had enough of Julian and his family’s madness does she leave, and that is the sign for Leanne to go back in and Tobe to go home. Thus leading to Sean putting his foot down and saying Leanne can stay as long as she wants and Jericho reappearing like nothing happened.

Which leaves Dorothy feeling utterly unsupported, outnumbered, conned, and very much of the mindset that makes you wonder if she might do something desperate?

Shame is a gateway to relapse.
— Veera

Leanne Reminding Everyone Who Has the Power Here Because Dorothy is married to a man who doesn’t often wish to fight, she seems to have this idea that she runs things in her household. However, as shown by Sean interacting with the homeless, despite her protest, and Leanne’s actions, it seems Dorothy came to the realization, at last, she is placated and not in control. Yet, it seems Leanne, who often humors Dorothy, but has lately treated her like a stubborn child, had to remind Dorothy that being the oldest in the house doesn’t mean she is the de facto leader. For who knows how long, Leanne has been building relationships with everyone Dorothy loves, and they understand her and her logic far more than Dorothy now.

And it seems with the Jericho stunt, Leanne decided Dorothy needed to be humbled since she was starting to get too big for her britches.

The Long Term Goals For The Homeless Population

While we finally got one of their names, it still remains unclear what the homeless people are going to do and what is their purpose? Aunt May and the Lesser Saints were mentioned in this episode and attacked fairly recently, but should we expect a battle or not?

Servant: Season 3/ Episode 7 “Camp” – Recap/ Review (with Spoilers)
Overall
As Leanne entertains us by checking Dorothy, there remains an almost aimless feeling with this show that leaves you to wonder, as each season does, what are we building to?
Highlights
Leanne Reminding Everyone Who Has the Power Here
Disputable
The Long Term Goals For The Homeless Population
82
Follow Wherever I Look on Twitter and Instagram, Like us on Facebook, and Subscribe to the YouTube Channel.