Michelle Wolf’s Nice Lady is a comedy special for a different kind feminist. You know, the ones which could care less about always being politically correct.

Table of Contents show
1 Summary
2 Highlights
2.1 It Was Funny, Insightful, and Didn’t Get Dull
3 Overall: Positive (Watch This)
4 Stream or Buy: Here [External] When watching Nice Lady, what you should fully expect is everything pretty much being about how men compare to women. Similar in a way to a Black comedian who only makes jokes about white people – that’s the whole act. But, it’s funny cause its true. Like one of the first jokes dealing with freeing the nipple while there is the problem of equal pay. In Wolf’s mind, a guy probably infiltrated some feminist camp and made that seem like a big deal when, in the grand scheme of things, it isn’t.

And at times, as you listen to the set, you realize that as much as Wolf is a feminist, she isn’t the type who is for all women per se. She is the type of feminist comic who likes to pick apart women she doesn’t understand and presents this subtle idea that she doesn’t necessarily want equality. Which isn’t so much a reference to her chardonnay over equal pay joke as it just seems like she wants current male privileges. Sort of in a, “With the way I live, my life would be so much easier if I was just a guy.”

Which in a way is Wolf’s unique appeal. She has one of those, “One of the guys” type of personas, including fart jokes, but she doesn’t try as hard as some of her contemporaries. She brings the female point of view, and makes it the heart of her set, and yet even when you can tell she is just expressing her aggravations of how unfair mother nature has been to women, and politicians, it doesn’t come off as whining. She finds the humor in Hillary Clinton’s loss, having menstrual cramps, the pressure to be beautiful and not wanting a man or child to feel more important than her person.

Ultimately showing that Michelle Wolf has no intentions of being a “Nice Lady” because she is a real woman. One who isn’t trying to play nice or keep up with traditional nonsense to make others feel better about themselves. She has s*** to do and that stuff would just hamper her.

It Was Funny, Insightful, and Didn’t Get Dull

Wolf consistently struggles between feminist ideals and what she thinks is BS.

Being that Wolf is a correspondent on The Daily Show and shows up on Seth Meyer’s late night talk show, there isn’t much in the way of surprises – in terms of what she says. Especially if you were already a fan, but she does present a voice which you don’t get out of a lot of the female comics who make it to having a comedy special. For while, yes, her set is mostly geared toward expressing her frustrations as a woman, unless you are a someone with no interest in hearing a woman’s point of view of life, you’ll enjoy yourself.

One of the things I enjoyed was her talking about not wanting to have children and being fine with being single. Yet, at the same time, still expressing the desire to have sex. Which I enjoyed because she didn’t pair this with self-deprecation and implying she was a whore for doing so. Simply put, she enjoys the company of men, even though they are creepy and dangerous, but knows the expectation of relationship don’t fit her goals.

Of which she admits could come off as selfish, but with her mindset being like a “Divorced dad who isn’t trying to get custody” she makes it funny and understandable. Leaving one last thing to praise, she doesn’t make herself seem smaller or push some form of self-deprecation to humble herself. Wolf’s set may include personal insecurities but doesn’t include shame. After all, she is on TV at least once a week and people paid to see that person. So why now should she make herself small to fit into the crowd? The crowd is the audience and she has a whole stage to herself. Which with every joke and perspective on how she sees the world, she fills that up and leaves you without one dull moment. 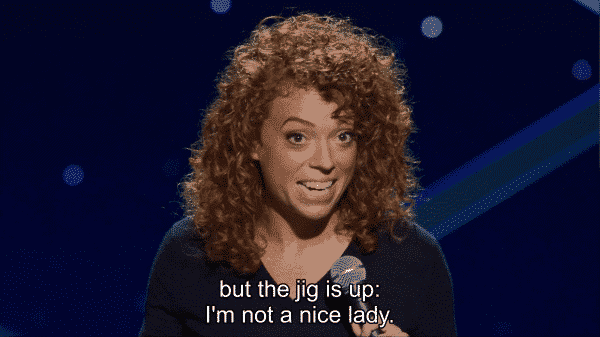 What Michelle Wolf does is side-step a lot of the issues other female comics have. She finds a way to come off as “one of the guys,” yet really she is just being herself. For seemingly, at this point in her life, she is beyond that nonsense. What she wants, as a woman, is for her career to continue to grow, not be made to feel guilty for being a bit selfish, and some equality. Also, a soft penis to play with would be nice. Just as long as it doesn’t get hard unless asked to.