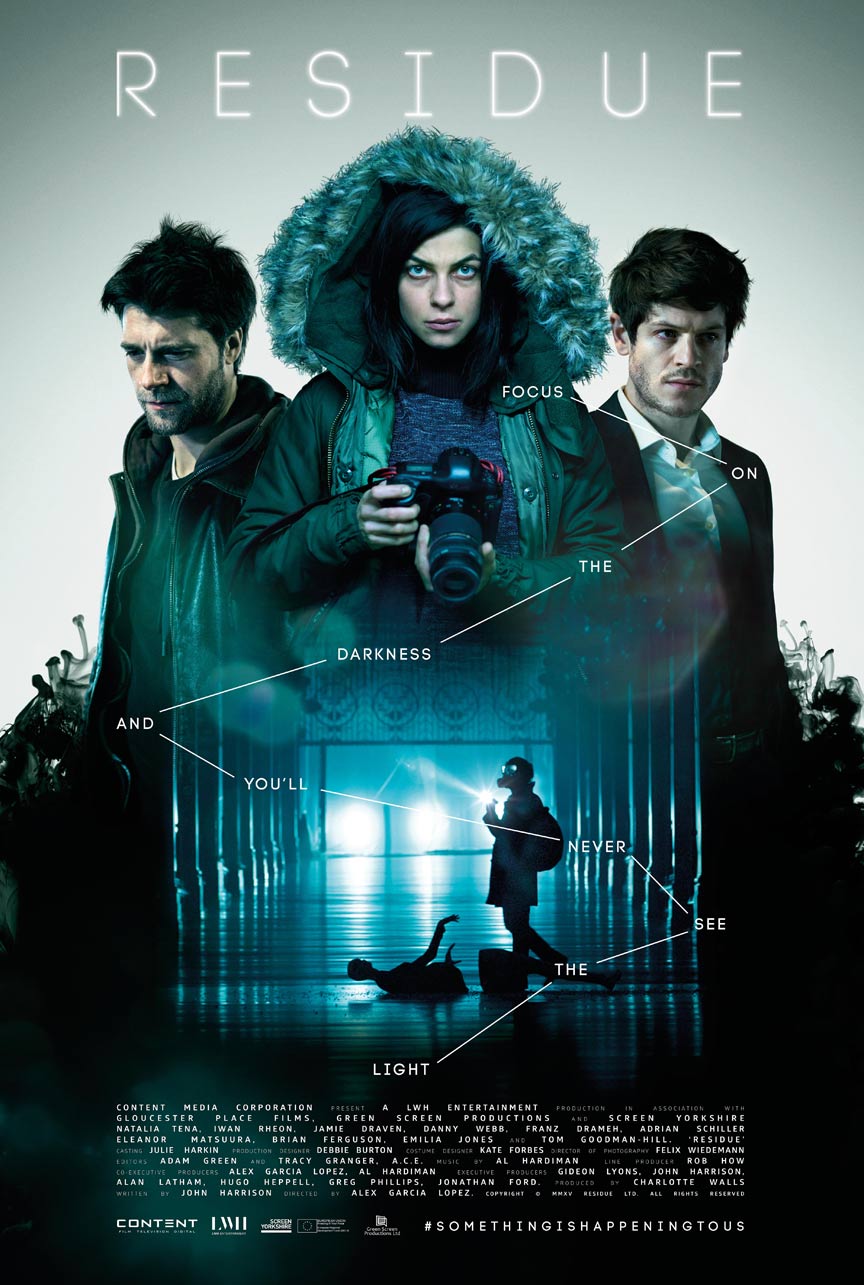 *At the time of this review I thought this was a movie, hence the tone of the review*

Residue provides the type of sci-fi experience you’d imagine an egotistical film major would make if they had the money to cast who they wanted, had the permits they needed to shoot, and a big enough budget for decent makeup artist and special effects.

Jennifer (Natalia Tena) is a photographer who rarely goes out without her camera. She is dating a young man named Jonas (Iwan Rheon), who works for the government, and on New Year’s Eve there is an explosion miles away from their apartment, which sends flames high into the area. For days and weeks after the area is quarantine, due to the chemicals which caused the explosion, but with the secretive nature the government is having, it leads to many being curious. Leading Jonas to overstep his position, and go beyond his security clearance, and Jennifer to investigate the many strange cases happening around her. That is, until what one Willy G (Franz Drameh) calls “Peter Pan’s Shadow” begins to haunt her. Forcing her to start trying to make noise, especially as Jonas disappears, but with her and Jonas, and a handful of others, going up against the government, you are left wondering if making noise will ultimately matter?

Upon being introduced with what is explained something similar to “Peter Pan’s Shadow,” I found myself interested in how this villain would work, and if it was being controlled. For with the shadow’s first appearance leading to the death of a woman, her baby, and the shadow’s host, I had high hopes. Plus the trailer seemed really intriguing, the recognizable actors all are connected to good productions, so I figured this was a definite movie worth watching.

WRONG! For while the shadow character does present a bit of interest, most of the time we are dealing with a script which has most the actors acting foolish. Take some of Jennifer’s actions with her camera for example. She, during her investigation, takes her camera into an underground club in which has people where mask and there is sexual debauchery happening. So no one taking her camera, or trying to snatch it as she takes pictures, makes absolutely no sense. Then, when it comes to Jonas, he openly is defiant about his belief the government is covering something up, and then when he breaks into the quarantine zone, he doesn’t sneak around or anything, while knowing there are camera throughout the area.

And it is those moments in which common sense is non-existent which ruins the film. As well as the shadow figure not being used to its full potential. For while it can take over people and cause them to kill, and we get to see it use its ability multiple times, neither its exact origin, nor how, and if, it can be defeated is mentioned. It basically, by the end of the film, just exists and you are left without any answers or reason to not feel cheated out of nearly two hours of your life.

Don’t be fooled by the cool trailer, this is barely worth using as background noise for a nap. For while the shadow villain does bring quite a bit of intrigue, the search for who caused the explosion, which may have released the shadow, as well as circumventing the government, is sadly the focus. Leaving a rather boring film which brings to question if the actors involved either were simply dealt a horrible script, which didn’t seem that bad when they read it, or if perhaps they are deserving of being type cast in the roles which made them famous.