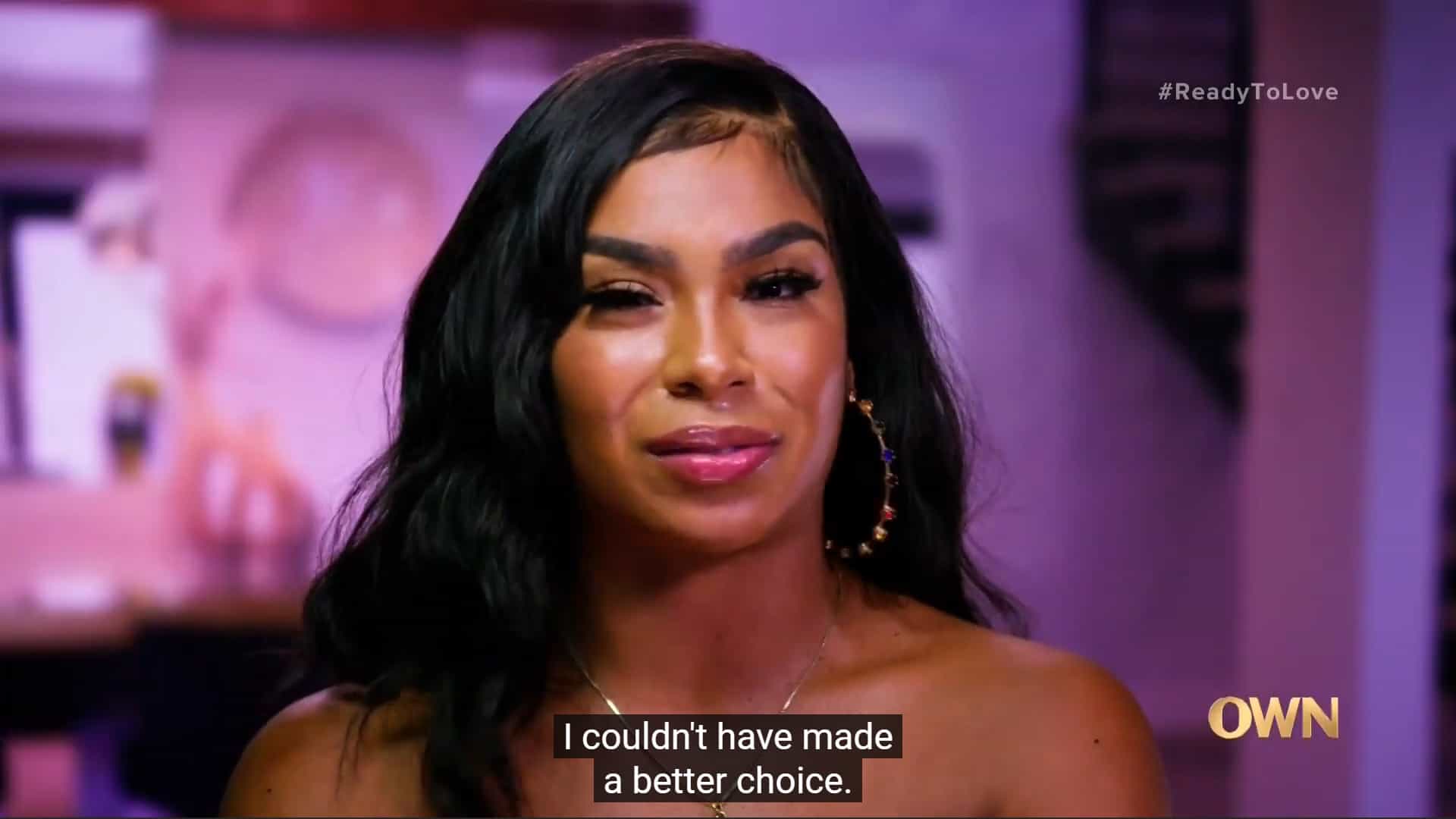 It’s decision-making time, and so comes the question of whether the obvious and logical matches happen, or will there be a curveball or two?

Getting The Obvious Out Of The Way – Donta, Aisha

Everything pretty much goes perfectly. Yes, Aisha wants to be the woman, more so worry about homemaking than hustling to pay bills 50/50, but Donta seems fine with that. And ultimately, they choose one another.

While things between Donta and Aisha are simple, things are more complicated with everyone else. For Sidney and Frank, there remains this difficult decision between if this person who comes off as the homie can evolve into a lover or should just stay a friend? For Frank, his cousins love Sidney’s personality, but Mumen’s family values seem more in line with what he wants long term.

Then with Sidney? Phil’s people grill her, and she seems to be the only one taken to task, but she handles things with grace. She is honest about her situation with Frank and how they exist within the same circles, so things are quite easy. However, there is a feeling of peace with Phil, a calm, butterflies, and while Shiloh raised a red flag, Sidney sees the issue more so as a potential Shiloh thing than Phil’s thing.

As for Sabrina and Walter? As Sabrina has said throughout the process, she and Walter are excellent when in each other’s presence. However, when not up under each other, Walter is distant, and she is taking note, despite being together the longest, they aren’t that affectionate. If not, better said, Walter doesn’t take the initiative like everything else in their relationship. This leads her to wonder, would choosing him in the finale make a difference?

So, what are the final decisions? Well, Mumen and Frank match up, Sidney and Phil, and as for Sabrina and Walter? Well, here is the thing – while it would be the easy decision, Sabrina makes the tough decision to say no. Yes, their families like each other, their friends, but every woman on here has spoken about, at least once, wanting to be pursued, and Walter never stepped up and pursued Sabrina. So rather than say yes for the cameras, only to be over by the time the reunion hits, Sabrina decides to, basically, tell Walter he isn’t ready to love. Maybe not in general, but when it comes to her? He definitely isn’t ready to love her as she deserves.

I don’t like to be confused in my feelings.
— Sabrina

I don’t think, when it comes to the confessional, Sabrina really ever said anything good about who Walter was off-camera. She felt like she wasn’t pursued, just chosen by process of elimination, and while there was chemistry, Walter never put the heat on. He left things lukewarm, and who the hell wants to be with someone who can’t pick up the phone? Hell, whose family will note he is affectionate, and you will know he likes you by the way he acts?!

That right there seemed to be it since the man they knew and the one she has spent ten weeks getting to know weren’t in line. So I’d submit who she was dealing with was someone who wasn’t getting eliminated, so he figured a way to stick around and go through the motions. Which is fine to do for a job or situation you’re tolerating until the next one, but a relationship? Sabrina deserved better, and thankfully she honored herself by walking away.

Not Being 100% Sold, But Hoping For The Best

The reunion already makes it seem Mumen and Frank are a no-go, and who knows what other drama may come that could rock Donta and Aisha, alongside Sidney and Phil? Now, I think there could be issues with Sidney and Phil, just because I don’t know if Phil is ready to be with someone whose lifestyle involves often being out late, considering he likes to be a protector. Which could easily go from being protective to being smothering – if not a potential detriment to how she does business.

Though considering they still seem cozy on the couch, maybe these problems won’t arise? Who knows, maybe when Aisha and Donta got to know each other better, issues arose? They get along, but what about their kids? Also, is Donta truly for the idea of someone who wants to be a housewife? If not, have him be the man and provide financially, while she may “handle a bill or two” but leave the rest to him?

I don’t see any undeniable couples, but this is what we got by process of elimination and, let’s see if any last.

Ready To Love: Season 5/ Episode 12 “One Last Assignment” – Recap/ Review (with Spoilers)
Overall
Ready To Love still seems to be fighting against itself by pressuring people into decisions they may not be ready to make, but with there being a competition and cameras, they feel compelled to be with someone by process of elimination.
Highlights
Sabrina Not Choosing Walter
Disputable
Not Being 100% Sold, But Hoping For The Best
81
Follow Wherever I Look on Twitter and Instagram, Like us on Facebook, and Subscribe to the YouTube Channel.