Wherever I Look
Recaps, Reviews, and So Much More
Home TV Series Queen Sugar: Season 6/ Episode 10 “And You Would Be One Of Them” [Season Finale] – Recap/ Review (with Spoilers)
TV Series

Queen Sugar: Season 6/ Episode 10 “And You Would Be One Of Them” [Season Finale] – Recap/ Review (with Spoilers)

With the announcement that its next season would be its last, the season 6 finale sets up the end of the war that has plagued the farms of St. Jo for generations. Charley is tired. For years she has worked to better everyone else’s life while putting her own on the backburner. But now, she desires a change. She wants to move herself up on the priority list, and it seems she’ll do so by marrying and living with Davis in California. This means, when it comes to her running for congress, it won’t be for the state of Louisiana.

But, before she goes, Nova, or rather Dominic, delivers an excellent going away gift in the form of the Bordelon farm being recognized as a historical site, due to the graves across the family’s land. With Dominic delivering this, it is one less thing for Charley to worry about and Nova too. Which leads to those two being willing to move forward towards a possible relationship.

Speaking of relationships, Micah comes to terms that he doesn’t want a romantic one with Isiah. Simply put, he just loves Isiah more than he has loved any man, but it’s purely in an emotional and perhaps mental way. There isn’t a physical attraction, and Isiah is cool with that. After all, he believes men should be able to love and share intimacy the same way women do without expecting a romantic relationship.

With the Bordelon family’s land being preserved by the state, the family needs to go from being defensive to attacking. In order to do that, they need to secure the co-op, and while Prosper champions it and Billie finds a firm to represent the farmers, Cardale is being a holdout.

Why? Because it’s a risk, and with money in hand, he isn’t thinking long term. However, once again, Darla proves she is more than just Ralph Angel’s little wife and gives an impassioned statement that would push you to think she could run for Charley’s seat on the council. Add in Ralph Angel co-signing, and Cardale joins the co-op and gives the Bordelon’s some big-time purchasing power. Oh, and Darla’s water breaks later on, so it becomes quite a big day for her and Ralph Angel in multiple ways.

At this point, Parker, who steps in rather than her father, thinks the two sides have come to a draw. Yes, the Bordelons have defended their land and will be meddlesome with the outlet mall deal, but the war is not over. That is until Hollywood comes out with Theo, who looks like he got roughed up a bit, and Theo makes it seem he is not just ready to snitch on what happened with Ralph Angel, but perhaps a whole lot more that he knows about.

This puts Parker on edge, and while she doesn’t want to give up the outlet mall, she is willing to let the Bordelons keep their land if Theo keeps his mouth shut. This would mean the co-op would have to direct their money elsewhere, and the Bordelons technically have a liability through Parker knowing they used the farmers for their own selfish needs.

But all of that is down the road. Right now, the family is celebrating a hard-fought victory.

As Isiah has said before, in other cultures, other countries, even ones Americans would find conservative, there is more openness between men when it comes to affection. So you have to enjoy the writers wanting to use Micah to show the capabilities of loving another man without it being sexual. Then, to add a layer to it, Isiah is gay.

To me, as much as it may seem Hollywood would be the center of men fostering relationships with one another, through his business, I think Micah accomplished what Hollywood might not be able to do in St. Jo. He found love, compassion, intimacy, and a sense of safety in his fellow man and learned how to have the kind of freedom most guys in America probably won’t have. At least, as long as an aversion to men being too close persists in American society.

The End Of The War 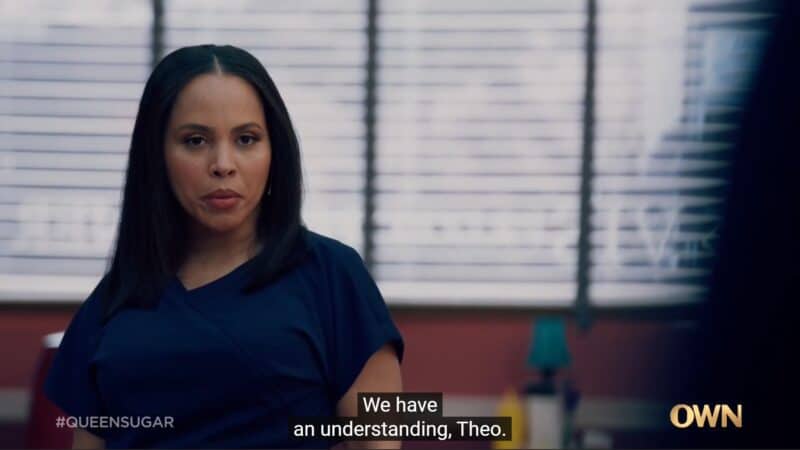 I doubt Parker, Sam, and the rest of the Landry family are going to be put in jail or out of business in the 7th and final season. However, it appears now they can’t bully the farmers and have a formidable opponent. The kind which will create either a cold war or the type of understanding where, while the Landry family will remain focused on developing properties and acquiring land, they’ll leave the farmers alone.

Either way, watching Parker realize the Bordelons have learned the ways of the Landry family and have changed who has the upper hand was a sight to see and will definitely be part of the highlight reel OWN will likely produce.

A Rather Quick Save

While we are glad it happened, we can’t quickly and easily ignore how quickly it did. The save of the Bordelon farm by the State of Louisiana defied government bureaucracy. It’s almost as unbelievable as how easily Hollywood found Theo and got him to be on his family’s side.  But, this isn’t us complaining about the long-term implications, just that it all happening at the ninth hour is way too convenient.

“Once again, Darla proves she is more than just Ralph Angel’s little wife and gives an impassioned statement that would push you to think she could run for Charley’s seat on the council.”

I love this little piece of writing that you wrote for our girl Darla. It is so beautiful to see Darla’s journey and how far she as come. She has the quiet strength to her but when she wants to be see and heard she 100% always makes herself known. These scene and Darla’s baby shower speech/monologue scene just ONCE AGAIN PROVES just how UNDERRATED our girl is. She is so good, and I loved watching Bianca bring Darla to life over these last 5 years but I am honestly happy that the show will end with season 7, more so just because I don’t think I can take too much of the somewhat sad storylines that the characters have to go through each season, but on a more selfish note I want/need for Bianca to be in more things, and now that she isn’t tide town to QS anymore maybe that can happen now.

Again, as we discussed before maybe our girl is okay with just being a supporting actress, and I know that Hollywood and script writers/movie makes aren’t dishing out the most original material/movies but I just need her to be in more things lol I know that I have been saying this since this show started, but I just believe in BL’s talent so much and I feel like the world needs to see her more. I know the pandemic has stopped a lot of things from getting made and people actively going to the theaters and all of that but come on Netflix/Hulu/HBO Max something/someone needs to get our girl booked with any of these streaming services cause our girl is the ONE.

Not to bring race into but we ALWAYS have a slew of somewhat mediocre white actress/actors who can’t act worth an inch of what BL can but they get the exposure and the opportunity. Darla is not just a pretty face, she has the TALENT. Also on a more shallow not our girl don’t age, so casting directors can do so much with her, not many actress our blessed with being able to be any age that is asked of them. Highschool age, college age, early – mid 20’s, early 30’s, and in her 40’s too lol

I know this was long and probably very unnecessary but I just like BL and what to see more of her.

Honestly, same! I thought I saw her cast in something for this spring but I apparently was mistaken :/