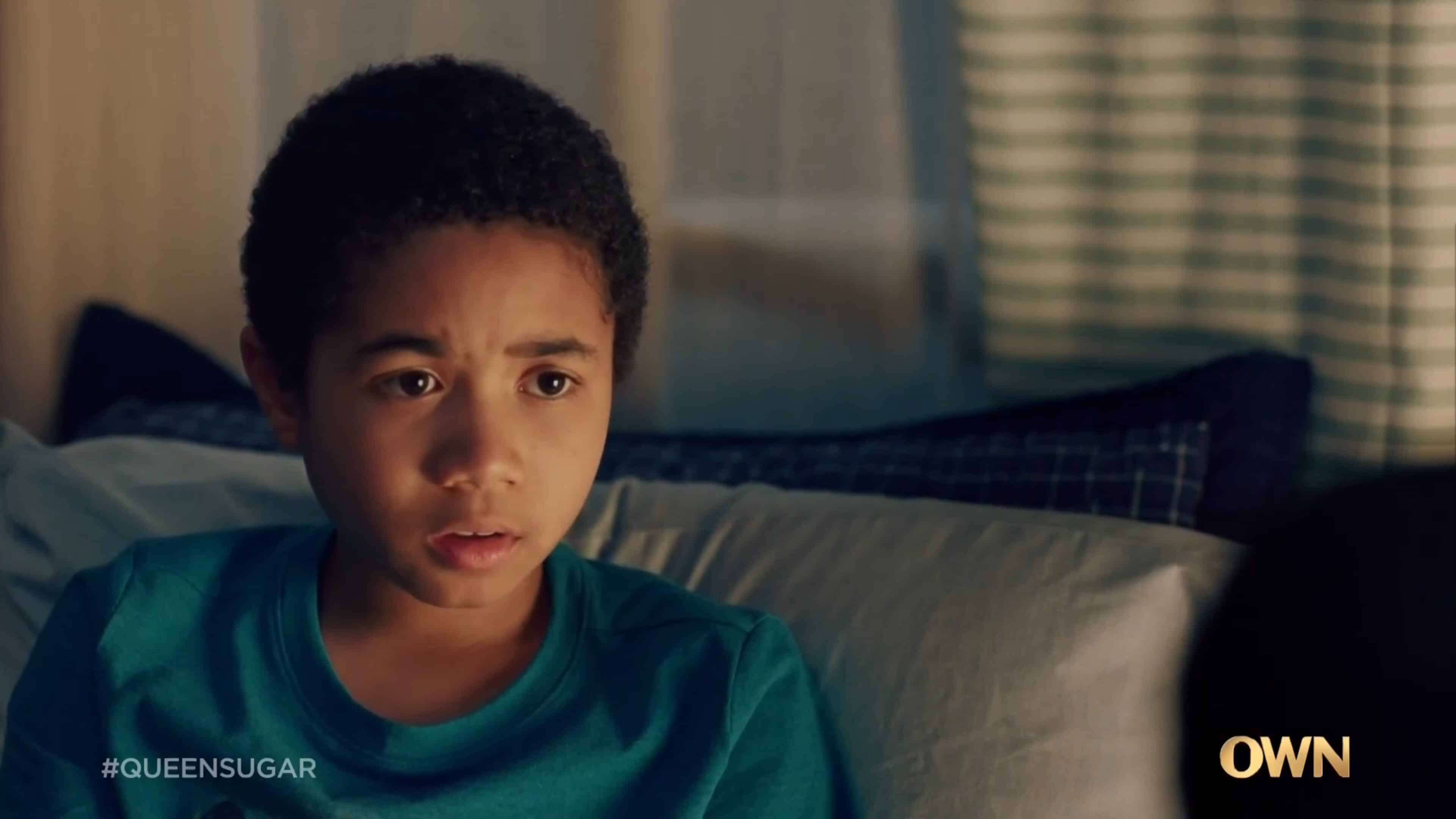 Blue learning about what happened to George Floyd

As the murder of George Floyd happens and the summer of Black Lives Matter marches begin, everyone is taken to task what it means for them, their relationships, and their families.

Hollywood is dealing with a wealth of emotions because of George Floyd’s murder just like everyone else, but what hits him hard is George Floyd calling for his mother and all the focus on his death. For with Hollywood just losing his mom, a man of similar build, close in age, being killed by a cop and calling for his mother, it hits him. Add in the narrative that omits Floyd’s humanity and his life before being killed; it just infuriated Hollywood.

But, what doesn’t help his anger is the threats of protests and riots and Aunt Vi thinking her shop will be omitted from any and all damage that could happen. Add in Hollywood having a gun and speaking real militant, and it gives Aunt Vi pause because she doesn’t like guns, and while she understands Hollywood’s position, she feels he is courting trouble a little bit.

Nova, being aware of what is going on and active in her community, the George Floyd murder doesn’t make living with a former cop and his “woke” daughter easy. You can tell she wants someone in the flesh to unleash her anger on, and with Calvin not giving the right answers when it comes to whether he feels embarrassed or ashamed of his people, it’s a disappointment.

And while Courtney gets it, in terms of how white people have the privileged of individualism during horrific moments but Black people shoulder a collective embarrassment, she gets a little too familiar sometimes. Which leads to Nova checking her, but no harm, no foul.

For maybe a day or two, Ralph Angel and Darla get a legitimate honeymoon and a reprieve from all the BS that has plagued their individual lives and relationship. But then George Floyd is murdered, and that forces Ralph Angel and Darla to return home, as it is increasingly becoming clear Blue might not be able to be shielded from this tragedy.

Which, considering a white man decides to come at Darla, it seemed for a moment Ralph Angel was about to have an altercation. Luckily, that isn’t the case, but whether a brave man or a foolish one, Ralph Angel decides to punk a man who, when he went back to his car, I swear to you I thought he went to grab something and not to leave.

Thankfully though, that isn’t the case, but unfortunately, upon picking up Blue, Ralph Angel deems it the time to give Blue the talk. One which you can see shatters that boy’s innocent view of the world and leaves him questioning, how can he stay alive in a world that doesn’t recognize his innocence? To which Ralph Angel gives some safety tips as Darla tries not to break down in front of her son.

Meanwhile, across town, Charley is having the same conversation with Micah, but rather than close the chapter on Micah’s innocence, she is trying to guide him on how to change what is unacceptable. Especially since Micah is pro-riots and Charley is anti-her son getting killed for the destruction of property. So, to show her support but keep an eye on him, she joins him at a protest.

Darla and Ralph Angel Getting A Day Or Two Of Bliss

I honestly thought Darla and Ralph Angel were going to act as a sort of relief from it all this episode. That we’d see them happy, swimming, being all kinds of lovey-dovey, and that honestly would have been perfect. There is nothing wrong with a little escapism amongst revisiting Micah’s past interaction with police and addressing a real situation. And, for the most part, that’s what we got. Ralph Angel and Darla got to experience the silver lining surrounding the dark cloud, which is their lives.

Blue’s Innocence Lost In A Conversation

While “The Talk” can mean different things to different, depending on your gender and race, for a Black male, it can be broken down between the Birds and the Bees, the “Work Twice As Hard” talk, and that the idealism you taught in school doesn’t apply to you. Blue got the last one, hence him asking, “Don’t all lives matter?” Because, theoretically, they should, but they don’t.

Also, the world isn’t filled with good and bad people, with bad people being the ones who break the law. Innocence is, unfortunately, subjective, and as shown by Tamir Rice, youth doesn’t protect you. So while Blue is this sweet, cabbage patch-looking kid, that doesn’t mean a cop won’t see him as a threat.

This is why him asking how to stay alive to perhaps make a change in the world hit so hard. It’s one thing to deal with that yourself, as someone’s child, but if you haven’t had to give that talk, you only know it from one side? Oh, it makes you understand why Darla was breaking down as she did. Heck, Blue is a fictional character, but considering we’ve seen the actor grow up? Having to witness this sweet and innocent boy’s character lose his innocence – that was devastating.

You have to continue to love Charley being willing to learn and adapt to her son rather than take the my way or the highway road. Especially since they don’t present the idea that her adapting and listening to Micah is out of fear of being alone. Rather, it is about rediscovering who she raised after he has had a taste of independence. Thus pushing the idea that, while Micah will always be her son and she his mother, they can have a mutual respect that doesn’t get cut off just because Charley is disagreed with or even challenged – respectively.

What we love about Hollywood’s point of view is he isn’t solely focused on the death of George Floyd, but the life. He is thinking about Floyd’s family, Floyd calling out to his mother, that feeling of helplessness, and how Hollywood, being of similar age and build, it goes beyond them both being Black men. And it reminds you why Floyd evolved past being another hashtag or another bitter pill to swallow and became the person whose death really triggered people feeling enough being enough.

Anytime we can be on the same page as Nova and enjoy her coming for someone, it is a rare but beautiful day. And honestly, I enjoyed her questioning Calvin and checking Courtney. For Calvin, him being complicit is known and understandable, for he literally cheated on his wife and took ages to leave that woman. Which I know partly dealt with having kids with her but considering how happy we’re told he is with Nova, I want to call him a coward, but without ever being in his situation, that feels harsh.

When it comes to Courtney, though, I loved the moments when Nova reminded her that you may have read a few books, went to a few lectures, maybe messed with a Black guy once, but don’t get too familiar! That had me DYING! Now, don’t get us wrong, we enjoy Courtney reading James Baldwin, not being stuck in the bubble she could easily live in, and being willing to converse with someone like Nova, who would make her come correct every time. But I feel there is an importance in showing Courtney still stumble, learn, and not take it to heart. Especially in the form of her getting in her feelings because she is trying and getting an attitude because she thinks no matter what she does, it is never enough.

Luckily, Courtney doesn’t have that attitude, and it makes it so, with her and Calvin being the designated white people of the show, they may be quite useful in being examples of how allies can operate.

Blue's Innocence Lost In A Conversation - 91%

"May 27, 2020" acts as a reminder that the topic of police abusing their power isn't new to Queen Sugar, but unlike before, this isn't a singular issue about one character but the people who most of the cast identify with.