In Queen Sugar’s return, as a council member, Charley is at war with the Beckington Group, who is hell-bent on changing St. Jo and bending things to their will.

As Micah spends two months away at college, joining the fraternity New Zeta Gamma, Nova is too starting her next chapter. Using the book which ripped her family apart, she launches the website “Tru Papers,” which she notes will be independent and provide a community forum. This leads to applause and even her family showing up, so it seems we are at a point where wounds are healing.

However, while progress is being made amongst the Bordelon family, when it comes to Calvin? Well, he remains Nova’s boo-thang, but his learning curve, when it comes to being with a Black woman, and surrounded mostly by Black people, is still in progress. Though it seems the real test will be Nova being amongst his people rather than Calvin, on a regular basis, being amongst Nova’s.

If I’m To Struggle, I Want To Struggle With You – Ralph Angel, Blue, Darla

Ralph Angel, Blue, and Darla as a family unit are stronger than ever. Blue is learning to cook and is the happiest he has ever been. And while Ralph Angel is dealing with the potential of eminent domain stealing his father’s land from under him, with Darla there, he finds peace, joy, and love. And it is through her ability to provide that as a storm brews, dissipates, and threatens to come back stronger that leads Ralph Angel to propose to Darla – to which she says “Yes.” 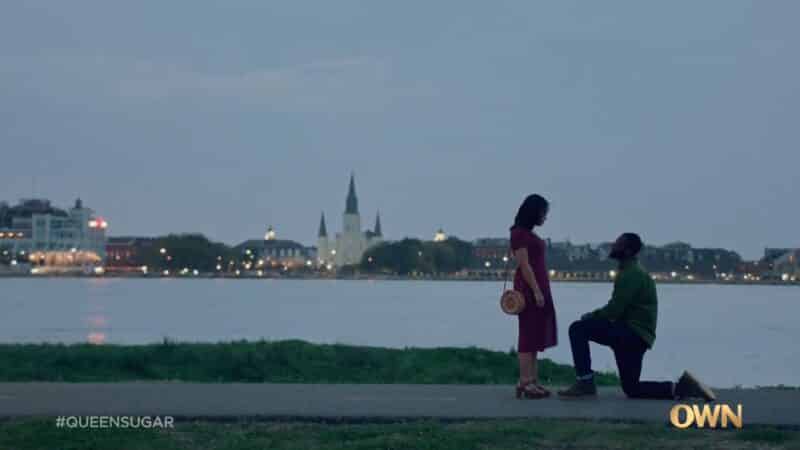 Frances being sentenced to state prison for 7 years for arson is a major win for Charley, who appears to be on her second term as one of Saint Josephine’s councilwomen. However, it seems while she may win elections, she hasn’t won any friends on the council as she seems to be the only one pushing back against Parker, and the Beckington Group, uprooting St. Jo’s farmers. For if it isn’t payouts, it is using eminent domain, and while Charley keeps buying time, all that means is Parker and the company being less friendly in negotiations.

Heck, their most recent proposal is focusing less on people’s farming land and going right through the cemetery where many in St. Jo have their dead buried. Which, because Parker grows tired of Charley, she pushes was partly Charley’s idea so that the one thing Charley has to empower her, the people, will turn their backs on her and leave her powerless.

While the journey to this point has been filled with moments that likely left Darla with trauma and even had Ralph Angel go to prison, thankfully, things are better now. Ralph Angel matured, Darla got clean, and Blue is a beacon of light wherever he goes.

But with this episode being in late February and the coronavirus epidemic on the horizon, it should be interesting to see how this relationship, and all three individuals, are tested.

While The Fight Remains Long and Arduous, At Least Parker Makes For A Interesting Foe

Each season something, sometimes someone new, comes about to threaten the Bordelon farm. It’s a never-ending cycle that has grown tiresome for us, but what credit Queen Sugar is due is that they always change the circumstances involved. This season, we have Charley, the general in this long war, on city council, with the people backing her against a company hell-bent on having their way. Oh, and not only do they desire to have their way but even send a Black woman, Parker, as their representative. Someone we met towards the end of the last season but clearly is going to be prominent in this one. Specifically, as Charley’s point of focus in the fight to save everyone’s farm and perhaps one of the most notable matchups she has experienced in the entire series.

We get it. Calvin’s presence is to complicate Nova by showing this pro-Black woman being with a clearly white man, a former cop, just about everything that could be seen as her opposite. It was understood back when she was his mistress that this relationship was made to stir the pot. However, him trying to use AAVE and seeing Nova at his grandfather’s party in a future episode? Honestly, we’re not looking forward to it.

Why? Well, while Queen Sugar does balance joy with trauma, sometimes the trauma, the oppression, the BS, it just feels overwhelming as a viewer. For it seems every good moment is paired with someone getting sick, a fire, isolation, and one foe replaced by one more capable than the last.

So considering you have Charley going against the Beckington Group, with little to no support from her fellow councilmembers, the Black Lives Matter movement of 2020 and then the Coronavirus on the horizon? A disease that I feel may kill off Prosper, for reasons I can’t explain, it makes the vitriol previews have shown Nova will go through at Calvin’s family gathering seem unnecessary. While The Fight Remains Long and Arduous, At Least Parker Makes For A Interesting Foe - 80%

Queen Sugar returns and holds onto the quality expected but with it now 5 seasons in, and renewed for a 6th, how will it try to outdo itself and at what cost will it be to the Bordelon family?