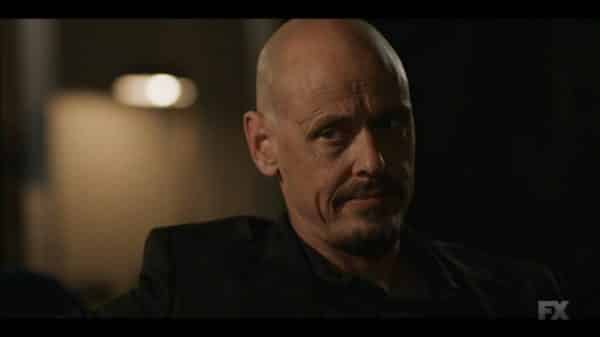 As Mr. Inbetween improves capturing your interest on the hitman side, it almost seems they have found a way to make both sides to Ray compelling.

Being that Brit is still a kid, monsters still haunt her, and it leads to her wanting to sleep in Ray’s bed to feel safe. Something that, with Ally not staying over, he doesn’t mind but also doesn’t want to become a thing. So, to aid her in dealing with her fears, he notes that he would name the monsters that scared him silly things like Gus to make them less scary. An idea Brit seemingly will take up.

Ray’s latest client is a man named Kim, who lost his daughter Jenny, in 1995, when she was the age 13. Since then, he has hounded cops, hoped, prayed, and with him having liver cancer, he has gotten desperate for answers. So, he decides to pay Ray to go after a man named Dennis Miller. A person convicted of harming children in the past, but the cops didn’t find enough to pin him for what happened to Jenny, though one suspected him.

Thus leading to Ray torturing him, and for a minute, you’re led to question if Dennis is innocent. However, after a few good shots with a taser, Dennis reveals where Jenny’s remains are, and Kim gets a sense of peace.

The Ambiguity Of Whether Dennis Did It

One of the few issues Mr. Inbetween has long had is that it usually doesn’t give much, if any, oomph, to its episodic stories – specifically the ones for guest stars. Instead, they were there just to remind us Ray is a killer. One that, as shown from us looking outside Dennis’ patio, isn’t some fancy gangster who takes out politicians and diplomats, but everyday people.

However, what made this episode different was that things, initially, weren’t clear cut and dry with Dennis. While he had a history and a cop believe it could be Dennis, the way Caesar played the character left room for doubt. Almost like the cop wanted Kim off his back so he presented someone who did his time but could still be a believable suspect. Leaving you, until Dennis’ confession, wondering if Ray may have the wrong guy and whether he would question Kim’s accusation. For thus far, if Ray was paid to kill you, there wasn’t a whole lot that can convince him to not finish the job.

Yet, in this scenario, while you can understand Ray being passionate about this, for Jenny isn’t too much older than Brit, the fact we were allowed to question the scenario says loads about the future. One that has Ray geared to kill someone he is/ was friendly with and even deal with the fact, one day, Brit or Bruce may have their life threatened due to Ray’s work. After all, Nasir has to go after someone, and between a kid and someone with limited mobility, Ray has two serious liabilities. Thus pushing the idea that, eventually, Ray may have to increasingly show mercy, if not beg for it, to survive.

The Ambiguity Of Whether Dennis Did It - 90%