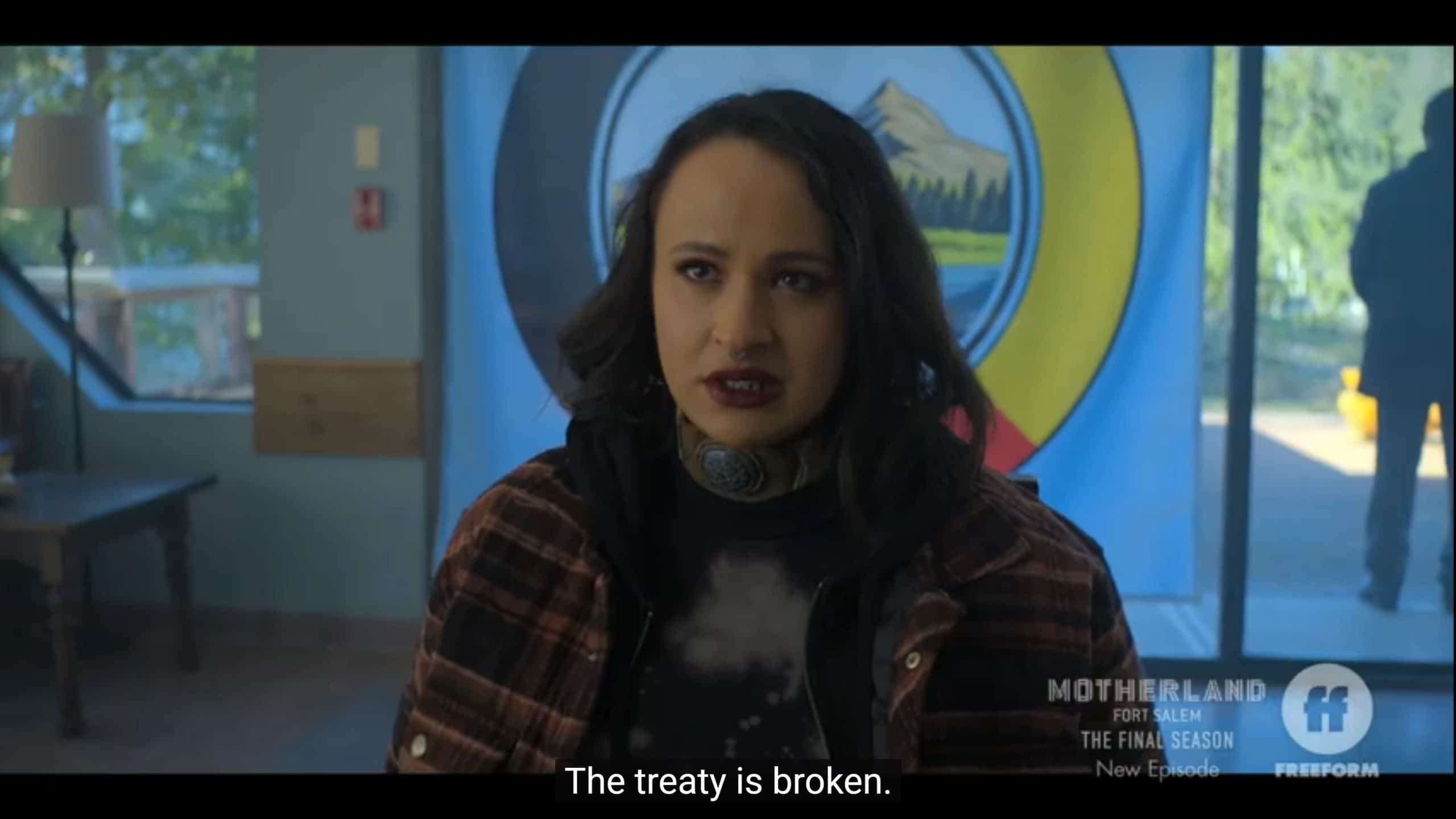 The war has begun, and already there are casualties. But, the effort to lessen the number of witches who will die is already underway.

A Traitor Among Us – Thelma, Milly, Tally, Scylla

How did the Camarilla know about the Bellweather Unit? Milly. Her people have the least amount of resources of the Council’s nations, and she has addressed this time and time again to no avail. So, since her people didn’t listen or seem to care, she ventured for the help of outsiders. As you can imagine, this angers Thelma, for she knows her history.

But luckily for Thelma, Tally has somehow quickly returned from California. Using her sight, she helps Thelma break the spell Milly put on the Council to allow US soldiers to enter the Cession easily. Scylla even sacrifices herself to allow them more time to escape but as for the veil that protects the Council’s nations? It seems that is no more.

With Abigail watching a member of the Camarilla kill a Marshall, she is pretty much done with the army. Yes, she is able to convince Lupe to let The Marshall’s squad go and even convince the cadets to hold up the accords but be rebellious. However, with seeing the Camarilla are more focused on death than justice, as she already knows, after reporting what happened to Thelma, she decides to join her militia. Which means setting aside the goal of finding President Wade.

As this happens, Anacostia has decided to leave Abigail to be Abigail and focus on her mission, which leads to her encountering Nicte, who appears to have a new group of followers.

To Change The Future, We Must Venture Into The Past – Scylla, Santos, Raelle, Willa, Tally, Alder

In the search for the two remaining stewards of the first song, Alder finds herself speaking to a Camarilla historian, Santos, who claims he is retired or reformed, but it depends on how you look at it. Yes, he is not an active member, but him holding various memorabilia of witches, including fake items, like the rope which killed General Alder’s sister, doesn’t make him a friend. However, he does provide enough guidance for Alder to learn the two lines responsible for the First Song are gone.

Because of that, she seeks out Tally to help her seek out something which can help save the world, especially since the First Song is the only thing stronger than the Witchbomb. A future event that, with Willa allowing Raelle to return to the world of the living, is something to keep in mind. Especially since Raelle’s next move is to rescue Scylla, who is going to a place cadets call a slaughterhouse for witches.

While you could look down on Milly for betraying her people and, in extension, betraying the Bellweather Unit, she presents a good reason. Compared to the other nations which make up the Cession, her people don’t have the same wealth of resources. This has been brought up repeatedly, potentially for more than a generation, and of course, none of the other nations will willingly give away their resources. No community does so willingly.

Hence, her nation did not want a civil war over resources, so they got an outsider involved because their needs fell on deaf ears. And with having Milly do this, it gives you a glimpse into what is going on within the Cession and the internal politics. Which includes that, based on how Thelma talked, most of the defense of the nations came from their Marshalls.

Lupe has been given scenes here and there for a few episodes, but with her taking command after the officer was murdered, now she is noteworthy, and as we see more and more follow orders without bravado, it shows conflicted feelings. Now, do we wish we got an Abigail type who was very black and white about this and was not so easily convinced to go easy on the Cession or the Bellweather Unit? Yes.

However, there isn’t enough time to build up a witch like that.

One thing that has seriously suffered in the final season of “Motherland: Fort Salem” is building up its world’s lore, history, and culture. This episode sort of fixes that in the form of Milly talking about issues within the Cession, Alder’s journey for stewards, and even learning little things like how The Marshalls are potentially the only defense of the Cession and they are all interlinked.

Is any of this information huge and world-shattering? No. But something is better than nothing.

Scylla Did Something Beyond Talk About Raelle

Scylla’s character has long been stalled by her relationship with Raelle. Occasionally, we got reminded of who she is beyond Raelle’s girlfriend through reminders she is part of the Spree or through her necromancy magic, but everything in her life still revolves around Raelle. But, with her making a sacrifice to make sure the Cession council got out, we saw a rare moment of her doing something not Raelle motivated. Which makes it sad that, with Raelle returning, Scylla will slip right back into being very little more than the longing girlfriend.

Motherland: Fort Salem: Season 3/ Episode 7 “She Returns” – Recap/ Review (with Spoilers)
Overall
With gaining details and history, “Motherland: Fort Salem” does push some of the things we have longed for. But, while it does deepen its lore and culture, it still is largely playing it safe.
Highlights
Scylla Did Something Beyond Talk About Raelle
Lore, Culture, and History
Conflicting Feelings Amongst Cadets
Milly’s Betrayal
Disputable
80
Subscribe to our mailing list Follow Wherever I Look on Twitter and Instagram, Like us on Facebook, and Subscribe to the YouTube Channel.