It’s Valentine’s Day and Yasir being who he is, and meeting Carol for the first time, leaves Nuri having to face what could be seen as hard truths.

Would you believe Yasir doesn’t support the celebration of Valentine’s Day? Are you surprised? Well, Nuri kind of is but Norman is not. For while he doesn’t know Yasir’s whole story, he does know some kind of game when he sees it.

He isn’t alone in questioning all this though. Carol, Nuri’s mom, her Aunt Audrey, and maternal Grandma Diddy also poke holes in Yasir not celebrating the holiday. In fact, it becomes such an issue that Nuri gets a little nasty with them. Though it doesn’t help Yasir is over Ruby’s house while this all happens. 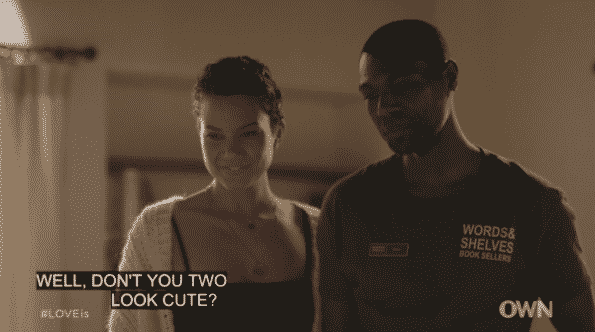 If it is this bad for Valentine’s Day, imagine when the holiday season begins again. I’m talking about Halloween, Christmas, and etc. For on top of Yasir, who now has a job at a bookstore, by the way, being kind of poor, he may object to pagan/corporate holidays. Never mind the fact he has a kid, who remains unseen, and is probably so behind in child support payments that, as soon as the feds catch onto him having a job, it’s a done deal. Especially since you know he is getting minimum wage.

Yasir aside, it was nice that Nuri’s extended family got established. Who knows how frequently they may pop up, but seeing them does help establish how Nuri became Nuri a bit. For just based off how her aunt and grandma seem, you can understand where she gets her sense of humor from. As well as, from her Grandma, perhaps how she sees and handles love.

Letting It All Hang Out: Ruby, Yasir

Yasir really wants to just be friends with Ruby. Problem is, he gave her only three weeks to do so and it wasn’t a clean split. For while, yes, for about 5 months they were distant and she only touched him twice – that’s acknowledged. However, they were still in a relationship and just going through a hard time. So him trading her in for a light skinned girl and moving in with her? Much less, now swallowing his pride and getting a job, no longer smoking, and seemingly now ready to better himself? It is a bit of a smack in the face to Ruby. After all, these sudden changes lead to the need to ask if she wasn’t good enough for the same effort Nuri gets?

And, Yasir being Yasir, he tries to calm things down but there comes a point where Ruby just needs one more hour. If Yasir is dead set on downgrading their relationship to friendship, and not just exiting her life, she needs more time. For the healing is just not complete yet. 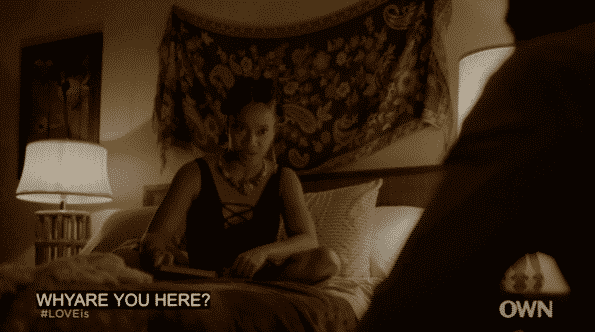 Ruby: Why are you here?

I feel for Ruby in ways I don’t think I may ever feel for Nuri. While the big picture idea about a show dealing with the relationship of two Black people is rare, seeing woman like Ruby loved like Nuri is even more rare. Which is the sort of complication of non-white, cis, and hetero media. As noted by Justin Simien, creator of Dear White People, there are layers to this new voices thing which complicate your vision.

In the case of Love Is, there is the issue that Nuri is a light-skinned Black woman being fawned over and wooed. Which is odd since she is based of Mara Brock Akil who is of a medium complexion. Then, when you add in Yasir, a medium to dark skin man, like the man he is based on, going from a medium hued woman to light skinned one, you get another issue. One which is all very much cultural than a general issue, but it exists, nonetheless, and complicates things.

But, getting back to the point, I do wish Wong-Loi-Sing and Weaver were switched sometimes. I get through Akil’s Breakfast Club interview why she picked Weaver but, it’s hard to not wish better and more for Ruby. By any means necessary.

Nevermind Yasir, What Do You Want?: Nuri, Yasir, Sean, Carol

Let’s take a step back, all this Valentine’s Day drama started with Carol meeting Yasir. Well, technically the drama probably started when Carol learned Yasir was a Muslim but we’ll get to that. Now, first things first, as established, while Yasir maybe a little bit insecure about being a man, in a traditional sense, this is only conveyed to us. When it comes to Nuri, borderline homeless, broke, only got a clean pair of draws on, don’t matter. He is a “King” and will present such as standard in any and nearly all interactions. Including talking to Nuri’s mom.

This rubs Carol the wrong way for she knows her daughter. She loves being in love and is the submissive type. The kind who may very well bend over backwards. Hence that whole rule about not having sex in that house with anyone but her husband and warning Yasir not to break her heart. Add in Yasir dressing her and her going along with it, also him having a key to her house and talking about where furniture can go? Major red flags in Carol’s mind.

All of which Nuri believes comes from her father since he did Carol dirty. Yet, there remains the whole, “Why is your man at his exes’ home?” thing. Though, it isn’t just Carol questioning Yasir. Sean calls him out too. For even if Yasir isn’t into V-Day, most women are and Sean recognizes, from his own mistakes, how dumb decisions lead to lonely men. So he pushes Yasir to, even if it is just a flower, celebrate the holiday with his lady.

Leading to, because Yasir has a keen eye, getting Nuri’s favorite flowers, crafting what will be their song, and them reconciling. Even to the point Carol may come around – eventually. 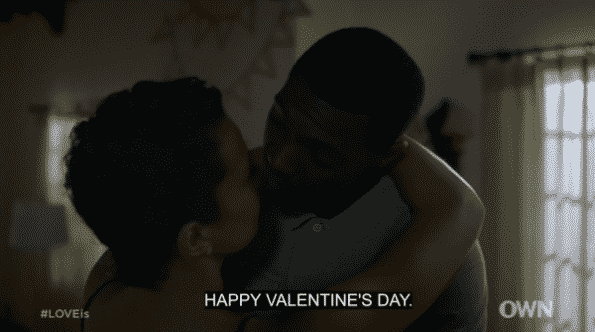 Is it wrong to say that this show is kind of in a loop? It’s the issue of knowing that, eventually, Nuri and Yasir will get married. It makes each trial and tribulation a speed bump and gives this feeling that we’re just going to see Yasir do stupid and selfish things, Nuri put up with it, then Yasir feels bad and apologizes. At least until the habit gets broken – whenever that is.

Then, to add to the issues, there remains this need to question how and why Nuri puts up with this? I’m not going to call her a sucker or gullible, but if it wasn’t for “Wiser” Yasir and Nuri being so cute, working through all their stuff, and being presented to us, you’d think this would be over eventually. Perhaps, like Insecure, Yasir would be the Lawrence to Nuri’s Issa, if not Nuri and Ruby’s Issa. A guy who may have been smooth, showed potential, but was not the long-term choice.

Which isn’t to say I’ve grown tired of the show but I do think it takes some kind of romantic to be head over heels with Love Is without thinking, “There is no way the average person would put up with that.” Even if Yasir’s game and confidence is on a level few people have, see, or have pursuing them.