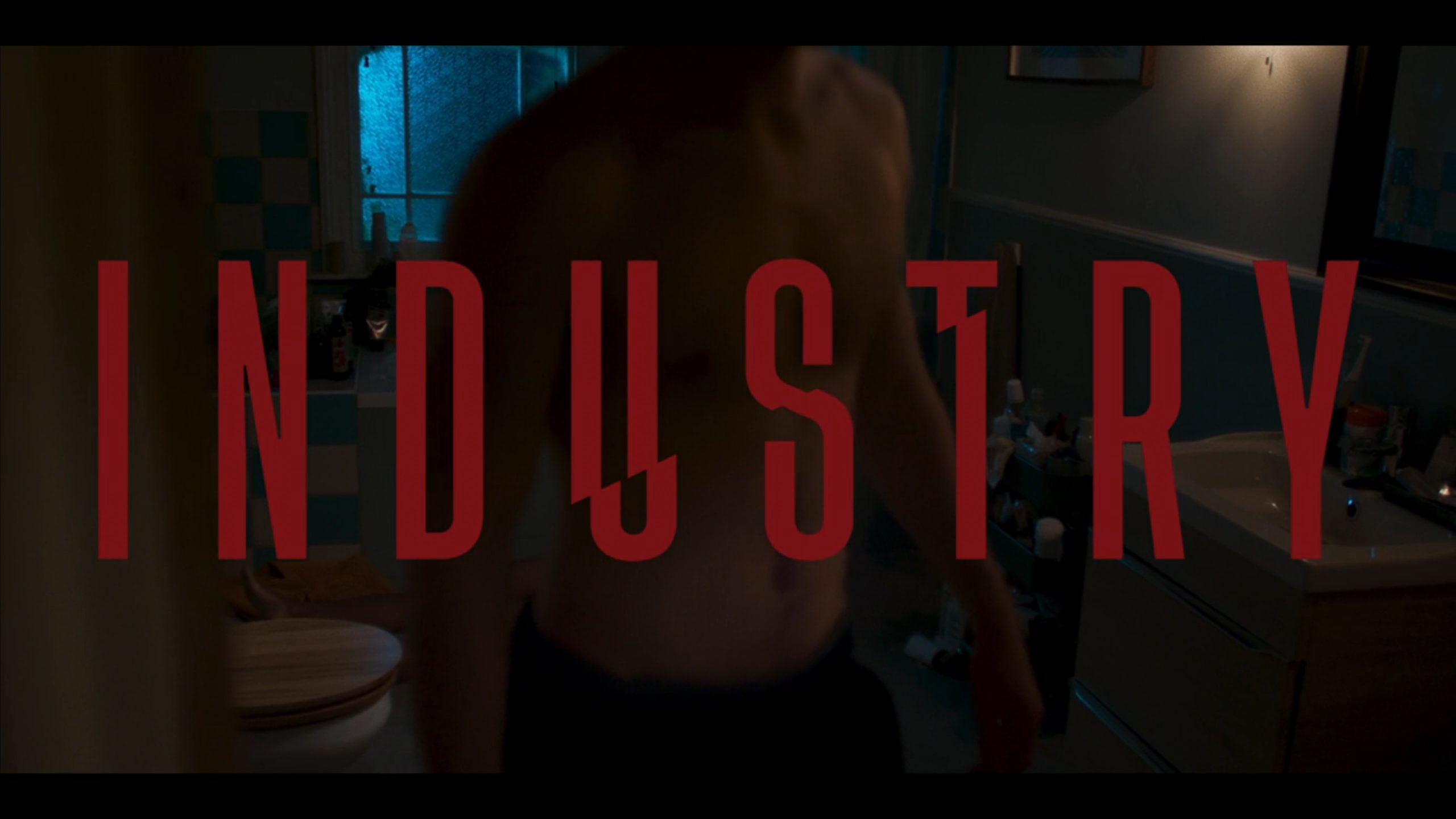 "Robert walking away from Harper," Industry, "The Fool," directed by Isabella Eklof, 2022, (HBO)

As the next generation learns their seniors’ tools and begins to snatch away their power, some decide to pull rank – to varying success.

Sometimes You Have To Give A Little To Gain A Lot – Rocco, Kenny, Yasmin, Robert, Celeste, Charles

Yasmin is really doing her best to impress Celeste, and bringing her father to Pierpoint was an easy way to improve her standing. However, Charles decides not to take the meeting seriously. In fact, he pushes the idea that he is there to humor Yasmin, not do business, and add in him coming in inappropriate attire, which reveals a boner when he stands, and Yasmin is ready to cut him off all over again.

But, that isn’t Yasmin’s only misstep. Enzo’s right hand, Rocco, seems to be on the verge of usurping his father, but Celeste doesn’t have an in. So, Yasmin stepped up and while it was going well, and she even secured a dinner with Rocco, then he asked about cryptocurrency. Yasmin is not privy to this, and while she asks Jackie, she doesn’t know; thus, Kenny is pushed forward since he has information.

Begrudgingly, Yasmin asks Kenny for help, and he ends up taking over the meeting since he and Rocco are both people who went to rehab for alcoholism. The bond is reported to Celeste, who makes it clear that she doesn’t support the whole “One Pierpoint” idea. Her clients are hers, and she doesn’t want to share with the FX desk or anyone.

This, naturally, leads Yasmin to need to lick her wounds and causes her to end up at Robert’s door. After all, when she needs to feel powerful, after too many consecutive moments of weakness, who else would she turn to? But, while there is a tease of sex, what she ultimately wants from Robert is advice. Mainly how does Harper do it, and Robert makes it clear that Harper doesn’t really plan things. She just doesn’t take her foot off the gas. And for Yasmin, his advice, specifically regarding getting her father in line, is to give him what he wants. If he wants his daughter when she was 12, give him that experience and use her intoxicating nature to get what she wants.

Eric doesn’t appreciate Harper’s last-minute introduction of Jesse into his Felim deal, and it further damaging his relationship with his top client. Because of this, he begins to push the idea of them being a team, the importance of Felim, and whatever he needs to say to make Harper think he respects her. The truth is, however, he wants to get the spotlight back.

The issue with that is that Harper knows she isn’t respected. During a trip to celebrate the Rican Healthcare deals, they don’t even put Harper’s picture in the materials for investors. It’s some other random Black woman who we have never seen. But to make matters worse, James, Eric, and seemingly others are hiding things and don’t clue Harper in. This leads to another stumble with Jesse when she makes it clear she rarely has all the answers at any given moment. In some ways, Jesse can appreciate this, yet with being used to bankers who can make quick decisions or seem like they always have an answer, this is an adjustment.

Speaking of adjusting, in order to further her relationship with Jesse, Harper pimps Gus to help Jesse’s son, Leo, get into Oxford or another notable English college. Thing is, Leo isn’t really interested in his father wanting to invest in his education, but not him. So he just flirts with Gus, who isn’t really taken by Leo’s privilege. If anything, he is more interested in Aurore, a Tory MP, who is a guest of Anna, focused on making Rican international and accessible to low-income people. Through her, it seems Gus wants to make his transition into politics, and with Aurore being a Pierpoint alumnus, Harper may have given Gus a grand networking opportunity.

If We’re Not Equals, Then We Must Be Enemies? – Eric, Harper, Felim, Jesse, Anna, James, Rishi, Danny

The game for Eric, Felim, and James, who heads Rican Health, is to get Jesse off the deal, put Felim in, and handle Anna since she is the only one interested in making this affordable. However, as Harper catches onto the BS and learns Eric has no intention of being Harper’s equal, she decides to show she isn’t one to underestimate, undermine, or undervalue. So she makes a deal between Anna and Jesse, which will give Jesse a controlling stake in Rican Healthcare, with Anna choosing the board, which creates a win-win for Pierpoint and the client, which Eric has been trying to push all this time – just in his and Felim’s favor.

However, a win for Jesse and Anna means a loss for Felim, and this loss might be the final one he is willing to share with Eric. Though, to make matters worse, Rishi gets dragged into this fight, and between Danny pushing him, and Harper having a deal on hand, Rishi is forced to make the trade and likely get whatever leftover ire Eric has when he is done with Harper.

Eric and Harper At War – Featuring Their Biggest Clients

It is always terrible to see people of color fight. This is especially true when it comes to Eric and Harper, for you can see a good team between them. Harper, who likes to play it risky and fast, balanced out by Eric’s measured approach, could be a dynamic duo. One that, considering Eric doesn’t know how to do anything else and has nothing else, could increase his longevity at Pierpoint. Yet, instead, mommy and daddy are fighting, and with Harper costing Eric his meal ticket? Oh, it is going to get nasty.

Oh, and add in that Jesse is not above getting petty too? As shown by his back and forth and accidentally shooting Felim? All I can say is that Eric seems like the type who doesn’t do well on the ropes, and if put into a desperate situation, he likely is dangerous.

You have to appreciate that Yasmin, despite her privilege, isn’t above being wrong and learning different ways to become right. She is struggling with Celeste regarding her measured response to clients, regarding flirtation and a personal touch, and even maintaining clients the way Celeste prefers. Then, she is sort of dead in the water on the FX desk because she is no longer enchanted by what they do, the hustle, and feeling so lucky to be on the team. They destroyed that Yasmin in season 1.

Now, she wants something better, more in tune with who she is, and there is something to be said about being someone like Yasmin, privileged, educated, a polyglot, seeing Harper getting the big wins and willing to learn.

Call it humbling herself or being envious, but smart about it, and you get Yasmin being curious about how Harper does it. After all, Yasmin is a sponge. Not just in terms of learning languages but also in how people move, what they say, their techniques. So, while Harper might be a bit foreign, you have to respect Yasmin notices that she is doing something right to get as far as she is while pissing off her mentor and former protector.

Seeing A Bit Of The Old Gus Back

With Gus being absent in the first episode and the highlight of his second being sex with some college twink, it would be fair to assume he wouldn’t make much progress in episode 3. He talks about writing a book, is paired with another educated twink who may or may not have a BBC fetish, but doesn’t appear to be going anywhere fast.

However, upon meeting Aurore, we see a twinkle in Gus’ eye. Long before things blew up at Pierpoint, the plan was university, Pierpoint, then politics. Based on Gus’ conversation, there is a chance the Pierpoint term may have been cut short, but it doesn’t mean the whole plan has to be thrown out.

Industry: Season 2/ Episode 3 “The Fool” – Recap/ Review (with Spoilers)
Overall
Between Harper’s risk-taking and Yasmin realizing she still has so much to learn, paired with Gus potentially getting his mojo back? It’s another good episode of “Industry.”
Highlights
Seeing A Bit Of The Old Gus Back
Yasmin Not Being Above Learning How Other People Do Their Work To Get Better
Eric and Harper At War – Featuring Their Biggest Clients
Disputable
83
Follow Wherever I Look on Twitter and Instagram, Like us on Facebook, and Subscribe to the YouTube Channel.