How I Met Your Father: Season 1/Episode 10 “Timing is Everything” [Finale] – Recap/Review (with Spoilers) 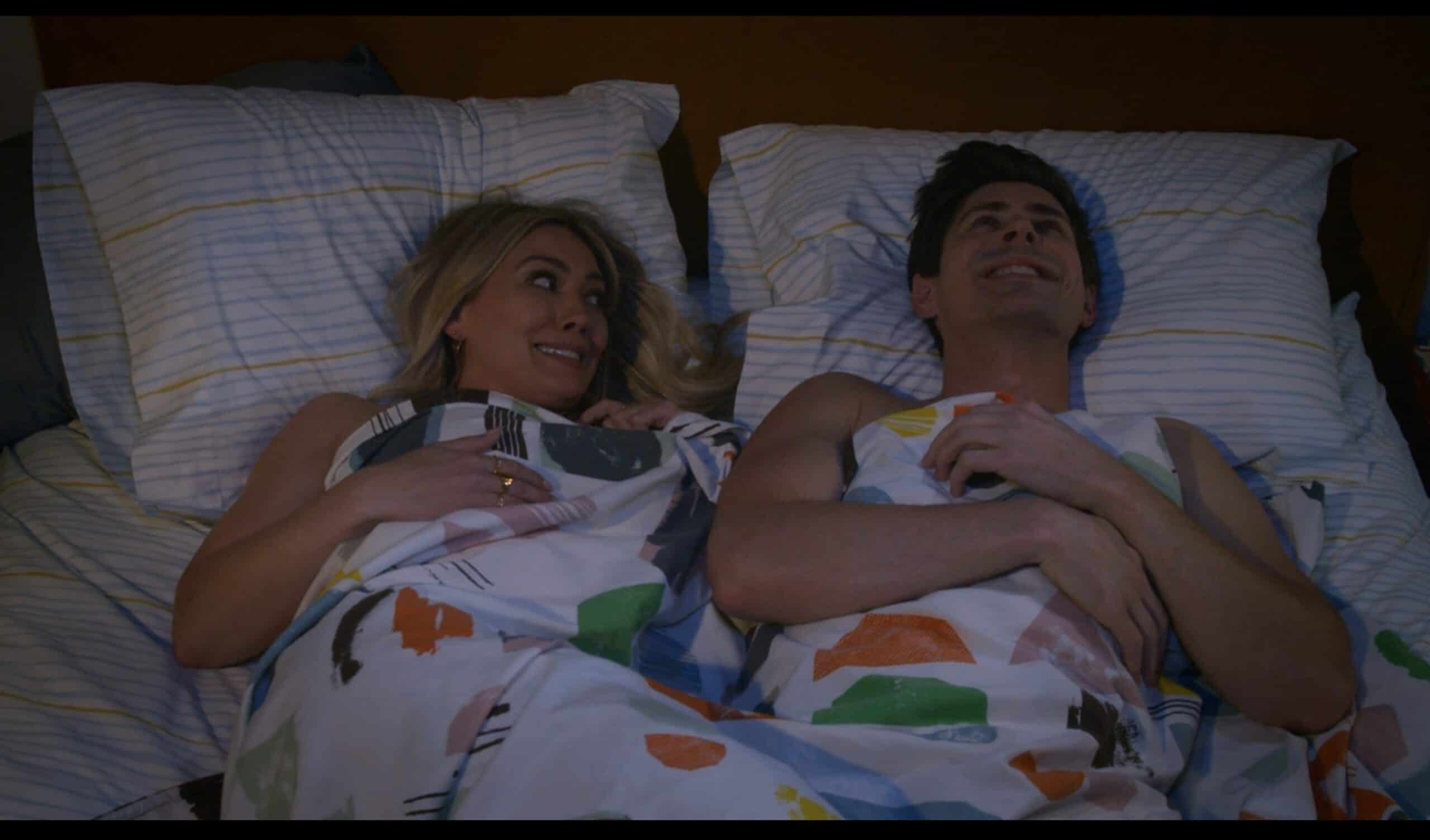 Everyone is forced to reconsider their relationships in this episode, and Ellen tries to bond with a stray cat.

The last time we were with Sophie, we were waiting to see if Jesse would show up to their dinner date. , we find out that Jesse did indeed arrive moments after, and the two end up in bed together. All seems well until later that night when Sophie hears Jesse mutter “I love you” in his sleep and she freaks out and brings it up to Jesse the next day before the opening of the gallery her photo is in.

Although the two laugh it off at first, Jesse insists it’s not that crazy he said “I love you” – after all, the two have been friends for a while now, and he just turned down Meredith’s tour offer to give their relationship a chance. The news about Meredith’s tour is too much pressure on Sophie, and they get into a fight about whether he should have said yes to her so to cool off, Sophie goes to the bar downstairs (MacLaren’s!), where she runs into famous news anchor Robin Scherbatsky! Robin helps Sophie face her fear of commitment and go reconcile with Jesse.

But when Sophie returns to Jesse’s apartment, she sees him kissing Meredith in the hallway and she immediately returns to the bar, where Robin tells her that “timing is everything,” and sometimes the timing just doesn’t work out. Yet, at the gallery, where Sophie celebrates with all her friends (minus Jesse), Ian’s timing is perfect as he arrives at the gallery and greets Sophie (“Is this a good time?”) right before the end credits roll.

Sid encourages Hannah to accept the cardiothoracic fellowship in LA, even though it means another year of long-distance for them. But when they meet their wedding planner later, seeing the cost of two weddings makes him reconsider the practicality of their decision.

So when Hannah and Sid show up at the gallery later, they’re no longer engaged, they’re married! They decided to go the cheaper and less stressful route of a City Hall wedding, although we’ll have to wait until season two to find out whether or not being married will make long-distance any easier on their relationship.

Charlie can’t sleep after Valentina’s comment last episode about someday having a family of their own to watch soccer with. So when Ellen comes home after tanking her job interview, he confesses to her that he doesn’t want kids after seeing how his mother was a terrible parent. Ellen assures Charlie that Valentina isn’t ready for children, but when Valentina wakes up she starts to mother the stray cat Ellen picked up as a new emotional support animal, and Charlie blurts out that he never wants children.

This leads to a serious discussion where they realize they’re both unwilling to compromise in this area, so Valentina breaks the news to Sophie at the gallery that the two of them have broken up.

Meanwhile, Ellen runs into Rachel (the woman whose dead grandma Ellen pretended to be best friends with) moving in next door. Ellen’s luck changes as she realizes the stray cat she’s been caring for is Rachel’s lost pet and after returning the cat, Rachel is willing to give Ellen another chance. Then, to top it all off, a joke from an earlier job interview finally lands on the interviewer, who calls Ellen to offer her the job.

Do not waste your time being scared, Sophie. Fear can make you run away from things that could be good – great even. Things that are supposed to be a part of your story.
—Robin

Connecting Themes from the Original Show

Fans of How I Met Your Mother will recognize some important themes from that show. Ideas like “timing is everything,” conflicting opinions on having kids, and saying “I love you” early in a relationship are all familiar concepts from the original show. 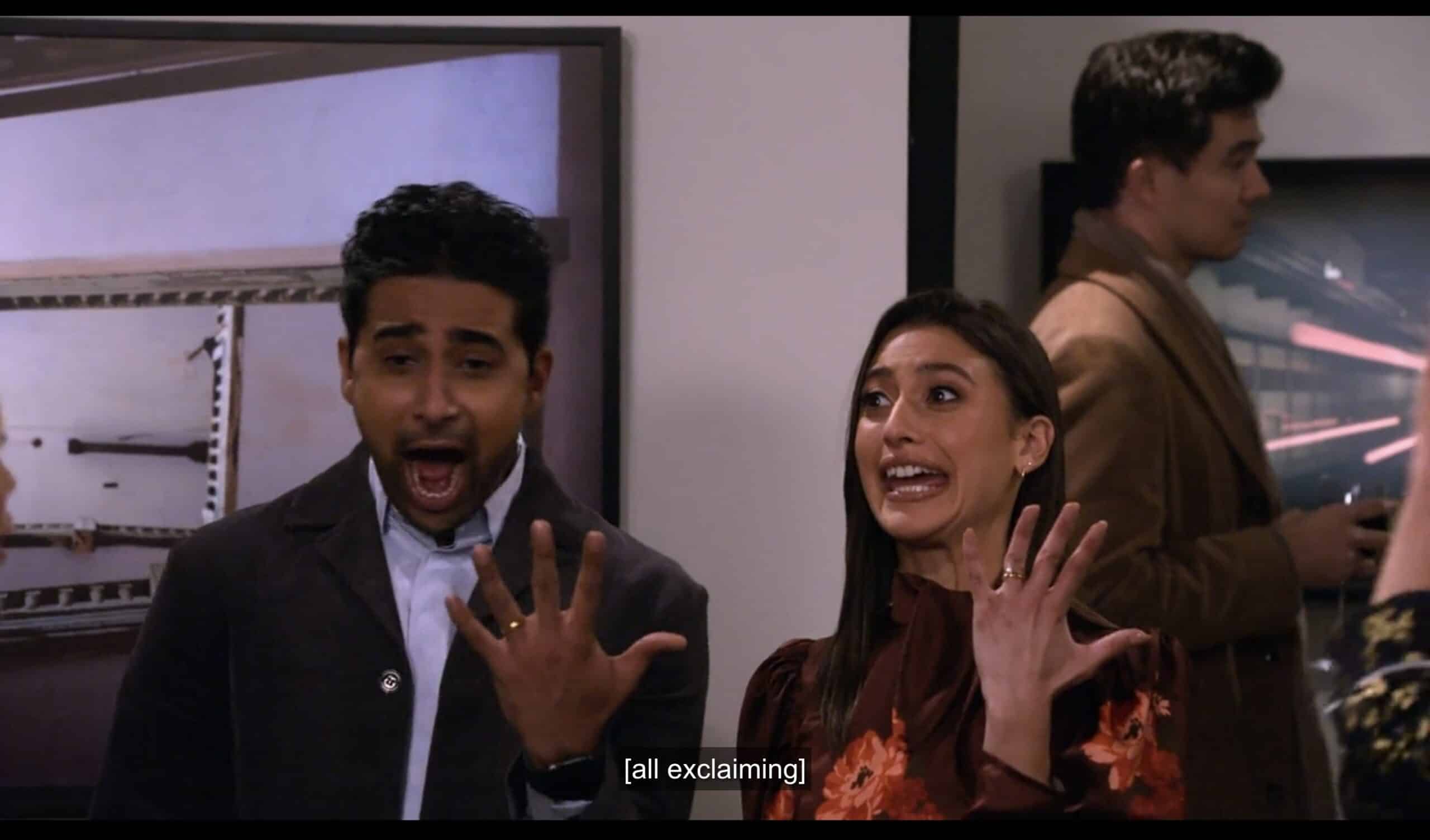 These similarities help establish a thematic relationship between the two shows without feeling overly repetitive. New twists – like having Sid and Hannah decide to get married immediately as opposed to Marshall and Lily’s break-up from wedding stress – bring fresh perspectives to the discussion of these ideas.

There is so much going on in this episode. It feels like twice the plot of a typical episode, even though it’s roughly the same length as usual. All the characters end up in a significantly different place from the start of the episode – Hannah and Sid are married, Valentina and Charlie are broken up, Ellen is pursuing a new romantic possibility, and Ian has re-entered the picture for Sophie, who is no longer as attached to Jesse.

It’s satisfying to see the resolution of several character arcs from the season, some of which had grown somewhat tedious. For instance, Hannah and Sid’s wedding stresses have at least been resolved, and hopefully, there will be some new direction for their relationship in season two now that they’re officially married.

The plot development that opens up the newest possibilities for season two, however, is probably the break-up between Charlie and Valentina. Valentina’s been established as somewhat of a player type, akin to How I Met Your Mother’s Barney Stinson, but we haven’t had the chance yet to see her in action as single and ready to mingle. I’m also happy to see Ellen’s situation finally looking brighter since most of this season her character arc was pretty much being socially awkward and striking out in every romantic setting.

The Tie-ins to How I Met Your Mother

Sure, it’s cool to see Sophie in MacLaren’s, sitting at the How I Met Your Mother gang’s table with Robin Scherbatsky, but some of the tie-ins to the original show in this episode come across as a little niche and out of place.

How I Met Your Father: Season 1/Episode 10 “Timing is Everything” [Finale] – Recap/Review (with Spoilers)
Overall
Season one ends strong with a finale that gives every character something to do and sets up a whole new set of possibilities for season two. This episode is highly reminiscent of “How I Met Your Mother” in a way that fans of that show will surely enjoy, while newcomers might feel like they’re missing something.
Highlights
Connecting Themes from the Original Show
Everything Changes
Disputable
The Tie-ins to How I Met Your Mother
80
Subscribe to our mailing list Follow Wherever I Look on Twitter and Instagram, Like us on Facebook, and Subscribe to the YouTube Channel.