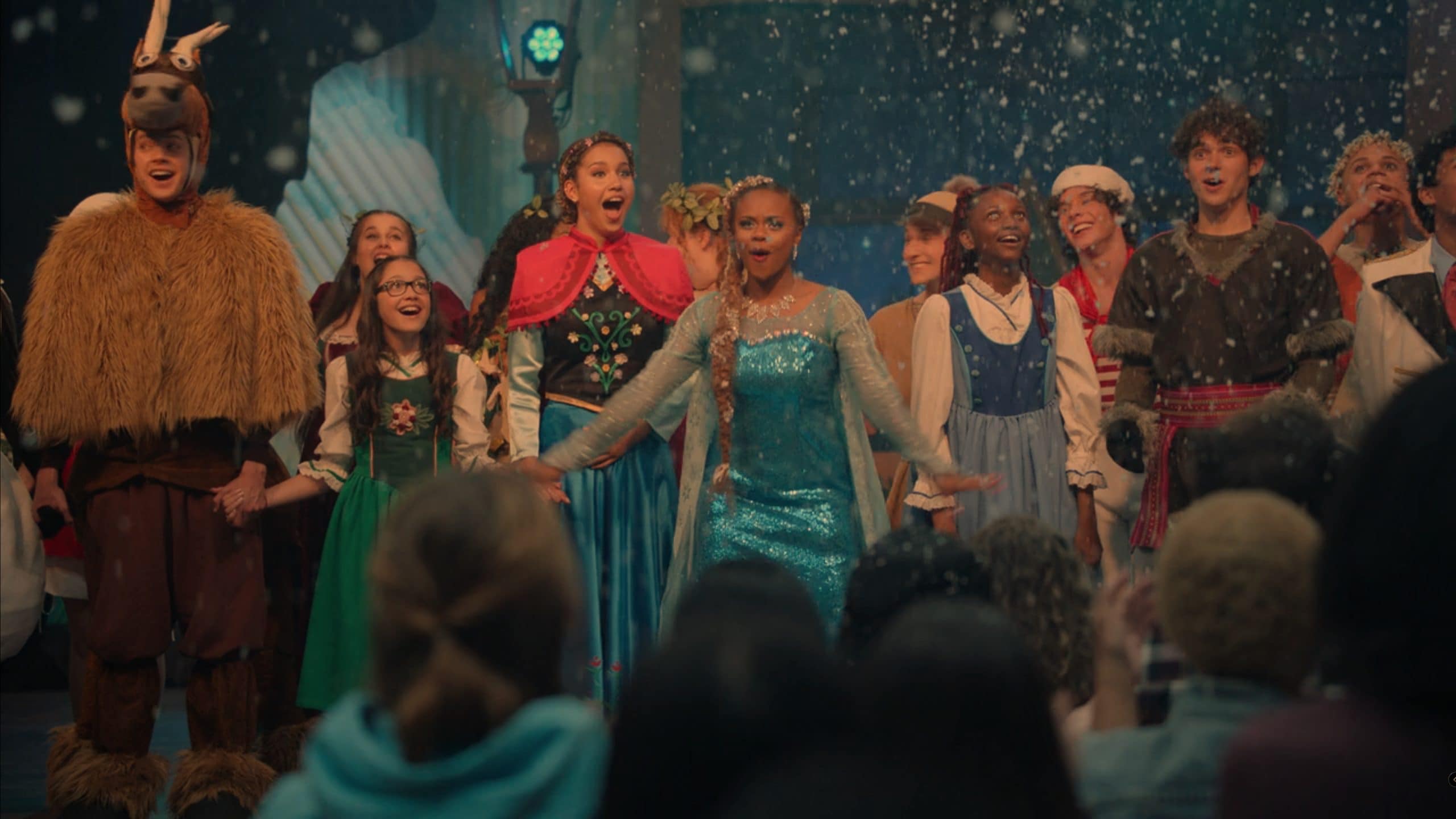 "The Cast of Frozen taking their bow," High School Musical: The Musical: The Series, "Let It Go," directed by Kimberly McCullough, 2022, (Disney+)

It’s time for the production of “Frozen” to happen, and between anxiety, Channing, a Nini, and Miss Jenn appearance, it is a magical night before the storm.

With the warning of Channing wanted to sabotage the production, everyone is on high alert. But, while Emmy gets to shine, Carlos, and more, unfortunately, the person hit with the sabotage is the one who could have fallen apart. Kourtney, with her anxiety on high, struggles with doing “Let It Go” and all it means to be a lead.

But thankfully, Alex, who plays her younger self, and has anxiety too, even a therapist, reassures her throughout the whole ordeal. This includes when Channing turns off the power, and everyone in support of Kourtney has flashlights or their phone light pointed at her to give her back the spotlight.

Their support, combined with Gina turning the lights back on and Corbin finally moving on from his need for drama and just wanting the kids to have a good time, allows Kourtney and the rest to have a good show. One which only becomes better when Nini surprises them with cards congratulating them, and even seeing some too. But, her arrival is made bittersweet, for she tells Miss Jenn she is thinking of staying out in California, and her moms left her with the decision whether to do senior year in Salt Lake City or not. Her final decision? Nini will leave Salt Lake and East High and is heading west.

But, while losing Nini is unfortunate, everyone else is still on a high. The show trended in Brazil, and Channing was fired – post-editing the documentary, and everything seemed good. That is until the cast sees the first trailer, and Channing’s editing makes all that EJ and Carlos wanted everyone to be realized. Though on a positive note, Ricky’s feelings being exposed does lead to Gina confessing her long-held feelings, and with Ricky reciprocating them, they kiss passionately. It’s unclear, however, if they may now become a couple.

Sometimes, the really good stuff begins only when something else ends.
— Miss Jenn

Kourtney and Alex Talking About Anxiety & Having a Therapist

As potentially said previously, while there has been a lot of progress in representation regarding Black people pursuing mental health services and understanding you can’t just pray it away, work still needs to be done. There is a generational aversion to therapy and diagnosis, and that is what makes Kourtney naming her issues as anxiety important; and Alex noting she has a therapist and even saying everyone should have one. But perhaps what drives this being impactful and important further is that it was Black girls who got to lead the charge of this being important. Since often, it can seem they don’t get the same complexities to allow people to understand, while strong, resilient, creative, and intelligent in various ways, they have and should be allowed flaws too. Never mind, they shouldn’t be written off just because their flaws make you uncomfortable or don’t fit your respectability politics.

Gina and Ricky Finally Getting Together

It has been a long time coming, but the timing has long been off. Ricky was trying to be with Nini, and with Gina being trying to sabotage her, it didn’t seem like a good look. Gina, who bonded with EJ, since she couldn’t have what Nini did, went through the motions with him, and as she became Gina 2.0, she tried to see if that person and who EJ was becoming could be together.

But, after finding themselves, losing who they think would be good for them, and furthering their understanding of who they are, Gina and Ricky may finally be together. Which considering both have dated someone before and even went through a rather up-and-down relationship and a rather notable breakup, here is hoping that lesson allows for a fruitful future.

Olivia Rodrigo clearly has gone beyond what “High School Musical: The Musical: The Series” can offer. She has had a number one song and album, won Grammys, toured internationally at some of the biggest festivals, and no longer needs the Disney brand to build her profile. She has transcended it in ways that took her predecessors years, if not a decade, never mind what some may see as a drastic moment to remind people they aren’t a child.

But, while you understand people need to move on, graduate, focus on things that fulfill them and strengthen their brand, rather than a behemoth like Disney, the send-off for Nini was lackluster. Yes, her and Miss Jenn talking and having shared moments were nice. But no goodbye to anyone but Kourtney? I get that’s her best friend, but EJ and Ricky were decent boyfriends. Gina and Nini became cool towards the end of the last school term. And add in she didn’t leave with a song, as much as you get there is likely an open door policy for Nini to return, the potential of her showing up increasingly feels as likely as Zac Efron or Vanessa Hudgens.

Wondering Will We See Characters Introduced This Season Ever Again?

Jet, Maddox, Liv, Emmy, and Alex have each given something different to “High School Musical: The Musical: The Series.” Maddox gave us a character who is lesbian, Jet presented us with someone who broke the bad boy archetype and didn’t lean towards being overly sensitive but simply human. Liv caused Ashlyn’s sexual awakening and seemed like a wonderful match for EJ.

Then, it isn’t clear how “High School Musical: The Musical: The Series” will proceed with Emmy and Alex, but they could be the next generation. Emmy, with her vocals, and Alex, with their ability and having a storyline regarding therapy, anxiety, and who knows what else? There is so much which could be done with these newbies, but it isn’t clear if they may ever appear again.

High School Musical: The Musical: The Series: Season 3/ Episode 8 “Let It Go” – Recap/ Review (with Spoilers)
Overall
While the clock within the season was only two weeks, the actions of season 3 will affect future seasons in a potentially positive manner. Mainly in showing “High School Musical: The Musical: The Series” has the potential to maintain the quality expected and take things steadily to the next level.
Highlights
Kourtney and Alex Talking About Anxiety & Having a Therapist
Gina and Ricky Finally Getting Together
Disputable
Wondering Will We See Characters Introduced This Season Ever Again?
Nini’s Send Off
80
Subscribe to our mailing list Follow Wherever I Look on Twitter and Instagram, Like us on Facebook, and Subscribe to the YouTube Channel.