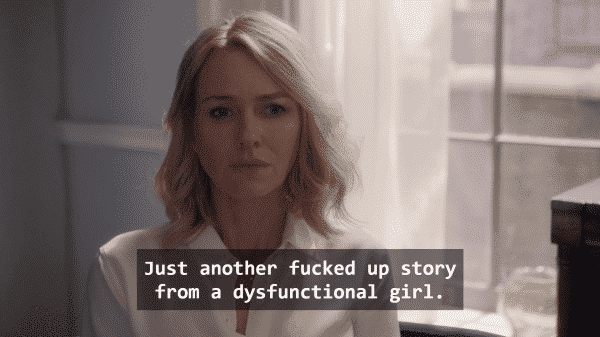 I had intended to watch every episode of Gypsy. After all, out of all the jobs which get considered “Professional,” the occupation of therapy is seen the least. With that said, I have not struggled so much to finish a pilot in quite some time.

Jean (Naomi Watts) has a stable life. She has a loving husband, Michael (Billy Crudup), who is a partner at a law firm. A daughter Dolly (Maren Heary), who may be going through something, but it isn’t clear exactly what yet. But, in general, Jean has all the tools to be happy. Yet she is not.

So, with her being a therapist, hearing her different clients secrets and perspectives, she decides to infiltrate their lives. One by one, she seeks out the people her clients talk about the most. Try to see their side of things. Something which, in turn, she tries to use as she provides advice and maybe nudges her clients into a better understanding.

However, where the line is will surely become a focus as the season goes on.

How vain it is to sit down and write when you’ve not stood up to live.

By the 30 minute mark, I was ready to drop this show and forget about covering the first episode, That is until Sidney (Sophie Cookson) became someone who clearly would be consistent. For there is something about Sidney which, with less development, could be considered a manic pixie dream girl. Well, at least that is the way Sam (Karl Glusman), her ex, describes her. However, as Jean masquerades as Diane, a journalist who writes about people, we see a different side. We get a character who arguably could steal the show and keep you interested. Which is saying something since there isn’t anything else here worth value.

Naomi Watts Makes For a Bore of a Lead Sadly, what drives a lot of actresses today to TV is ageism and a lack of complex roles in the movie business. However, in pursuit of what is called “Messy” roles, you still need a good actor behind them. You need your Viola Davis, Kerry Washington, Lena Headey or etc types. Someone who can command the scene and doesn’t give the vibe that they are as static as the wallpaper.

Something Watts kind of does. She is given what can be considered an interesting role but barely rises to the occasion. Making for, outside of her interactions with Cookson, she bores you to the point of wanting to stop watching. Though, to make matters worse, Watts doesn’t even act as some sort of Trojan Horse.

No Trojan Horse Effect As Backup

Watts is the most recognizable face of Gypsy. Well, at least in terms of media I’ve viewed. However, as noted, Watts doesn’t have that oomph when it comes to Gypsy. Thus making you think, like other Netflix shows with a bore of a lead, maybe there would be a Trojan Horse effect used. Such as pairing her with interesting patients, as the trailer sort of presents. Much less, plant the idea that she was going to manipulate their vulnerability into something interesting.

However, said patients aren’t that interesting. From Sam to Claire (Brenda Vaccaro), who is trying to be an active part in her daughter’s life, to Allison (Lucy Boynton), who is on a downward spiral, there isn’t a one you want to see more of. Much less, see Jean take an active interest in either fixing their life, to be a better therapist to them, or to mess with them for her and ultimately our, entertainment. 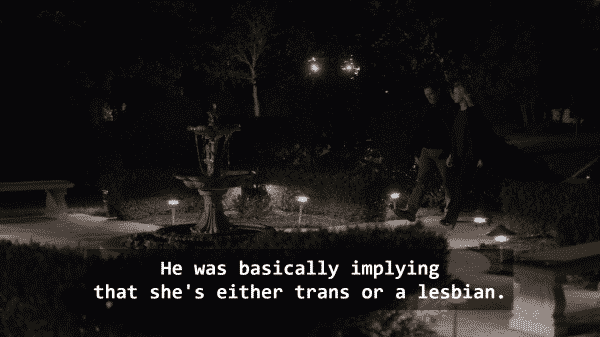 After an incident at school, Jean (Naomi Watts) and Michael (Billy Crudup) talk about it.

You know I have to shout out the non-gender conforming, possibly gay, maybe trans, character. It isn’t clear how big of a role Dolly will have in this but, alongside Daytime Divas, it is interesting how children are being represented more. In terms of being on the gender and sexuality spectrum. To me, this seems like a failed attempt at making an award-bait type of show. At least, that is the tone I’m picking up from it. However, as of the first episode, which for a binge-watching network like Netflix is most important, there is no hook. Do I adore Sidney and what Cookson may do with her? Yes. However, Watts is the lead and while I’ve seen more movies of hers than I thought, she is not who I remember from any of them.

So despite a 20+ year career, I’d say Watts should perhaps stick to movies. For Gypsy shows that while some can go back and forth between the two mediums of TV and Film, it isn’t for everyone. Some don’t have that charisma, for a lack of a better term, to follow them over the course of 5+ hours. Be it in one sitting or across multiple weeks. Which there is nothing wrong with.

But what keeps them from being labeled something to skip is Cookson solely. For while not a strong or interesting enough character to say, if prominently featured, you’d have to watch this, she is a silver lining. One who may have the type of career, unlike Watts, who when you look at her IMDB page, you aren’t left thinking “She was in that movie?”

Hmm, I have to respectfully disagree. In my humble opinion, Watts did what she could with a poorly written character. She’s in 90% of the shots and 80% of them were boring as hell. You can only do so much as an actor when your character isn’t fleshed out and there are so many holes in the storyline that I just gave up. The patients she had (I agree with your assessment) makes you want to bang your head against the wall or just tune out.

You are absolutely right about Sidney/Cookson. I think her chemistry with Watts was what kept almost everyone watching. Cookson is a wonderful actress but I think too much credit is given for this particular role. (I say this as a Cookson groupie). She is tasked with playing a bewitching, alluring, bisexual, fantasy girl who manipulated the hell out of her ex. There’s not a lot more to her the character is almost central casting. Cookson is very attractive and throw in the accent I think she could show up and breathe and everyone would be drooling. I could be wrong but I can’t imagine it’s hard to play a young, alluring, hot, charismatic character when it’s what you are in real life (also bi, she’s dating a famous rock star’sndaughter)- from the press she did for the show she seems like a less manipulative Sidney but then again she is doing press and the point is to manipulate interviewers to like you. Even Cookson said there wasn’t much that she was given about Sidney’s past.

They would probably expand on Sidney had there been a second season and Cookson could really shine even more given more to work with.

I can agree with your take. There are only a few actors who can make a bad script good, maybe even campy, but if their tool, the script, is broken or flawed, they can only do but so much.

As for Cookson, I think there are a lot of beautiful actresses but charm and personality isn’t something they all possess. There was a time I was infatuated with Jessica Alba until I realized, while pretty, she can seem kind of dead on screen.

In every movie I’ve seen her in, I’ve always found Naomi Watts to be an intensely charismatic actress who commands my attention… so I was shocked by your nasty comments on her performance here. I find it hard to believe she’d be capable of delivering a performance so bland, especially given her scene-stealing work in TV miniseries like “Brides Of Christ” earlier in her career.

Your description of the show itself makes me mourn that HBO’s “In Treatment” is no more. That was a show focused on therapy that was, for the most part, realistically detailed but also dramatically compelling… and it featured an interesting mix of older actors bringing gravitas and worldly pathos to the proceedings (Gabriel Byrne, Diane Wiest, John Mahoney, Irrfan Khan)… and younger up-and-comers (Mia Wasikowska, Melissa George, Alison Pill, Amy Ryan, Dane DeHaan) with an affecting earnestness… sadly, both the younger and older actors featured in “In Treatment” seldom got handed scripts as well written by Hollywood, probably due to the prevailing ageism you describe

From what I’ve seen from other reviews and social media, as noted Sidney is the highlight. Most people are talking about her and Jean’s relationship to her. Is for Watts, she is treated as someone you have to suffer through until she is reunited with Sidney again.

Great review!! And I agree with your opinion about the show.