Wherever I Look
Recaps, Reviews, and So Much More
Home TV Series Good Behavior: Season 2/ Episode 5 “You Could Discover Me” – Recap/ Review (with Spoilers)
TV Series

Good Behavior: Season 2/ Episode 5 “You Could Discover Me” – Recap/ Review (with Spoilers)

Letty finds herself in a drag club and strangely, one queen’s reveal speaks worlds about Letty’s life so far.

After the reveal agent Lashever is a joke, we get to see how she is treated in the office. There we find her underlings cracking jokes, like how she graduated the same year as their boss but is multiple ranks below him. Of which her counter is white male privilege. But, later on, she gets her comeuppance. If only because the case those two boys are working, one that’s a $500,000 raid? That is the one Lashever is trying to score from. All she needs is Letty to not screw up.

At Rose’s Garden is where the score is. It’s a drag club. One in which the business owner Mickey is no easy one to play and Letty knows it. So, with that in mind, she gets in touch with an old friend, Stephen, hoping he may take part in the con. However, with him not doing drag for 8 years, and Letty not necessarily on his best side, he doesn’t care to put that much effort into something for her.

But that isn’t to say he won’t help. For reasons unsure, since she did get him banned from every Sephora in the country by pinning him as a thief, in his words, he makes her into a drag queen. With that, Priscilla McCall is born and with some tears comes Mickey giving her a chance. Something he’ll come to regret.

Though, with Letty pulling a Victor/ Victoria [An excellent drag movie featuring Julie Andrews – External], so comes the question of what Javier is doing? Well, he is being seduced, and seducing, Mickey. Someone who reveals himself to be the club owner Rose.

You Gotta Let Go Of What Holds You Down And Reinvent Yourself: Estelle, Rob, Letty, Javier, Agent Lashever

Which leads to a very honest moment. One in which the drag queens aren’t just your usual fabulous queens who are very flamboyant and seeming just about entertaining you. As the quote below shows, Good Behavior pursues humanizing drag, maybe even trans folk, like Mickey – who performs under the name Rose.

During the moment of the quote, we come to realize how universal a drag performer, or trans person’s, story is. For in many ways, their redefining of themselves matches what Letty is trying to do. Create a normalcy of their own. Be this person they can love and put away the past with a period and start a new chapter. Now, where is Letty on this journey is hard to say. However, at the very least, there is some pursuit of being cordial with Estelle, who is still being pushed by Rob to feel guilty, even if she betrayed Javier, and not screwing Stephen over again. 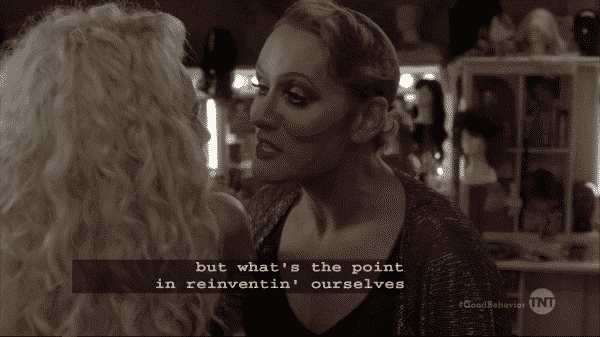 And while, yes, she does screw over Rose, in a way she saves them too. For with the FBI pulling up nothing, they go uncaught. Yes, Rose still has a lot of guns in Mickey’s office, but not the big score they were looking for. Thus allowing Agent Lashever a good laugh and making it so Letty just has to get back $50,000 she gave to Stephen for his help. For while Letty hasn’t necessarily found that good person deep down, she can at least settle for the person Javier helped her created that he shows he deeply loves.

[…] we’re all born, right? And before we can even talk, everyone just decided who we are. And most people just become that person. […] Even if the whole time it just feels like we’re watching ourselves play a part. But a lot of us, we can’t do that. So we lash out. Self-destruct, disappoint everyone around us, all those people with all those expectations. But then, a very few of us, we find a way to build a whole new self. Someone we created. Someone we birthed. Someone we love. Someone other people love. Someone fabulous. And for me, I think that if I can create someone good, then that good someone must be somewhere deep down inside of me, for real. And one day, she’ll take over. Until then, if I wanna be the me that I want to be, I’ll have to sometimes settle for being another me. 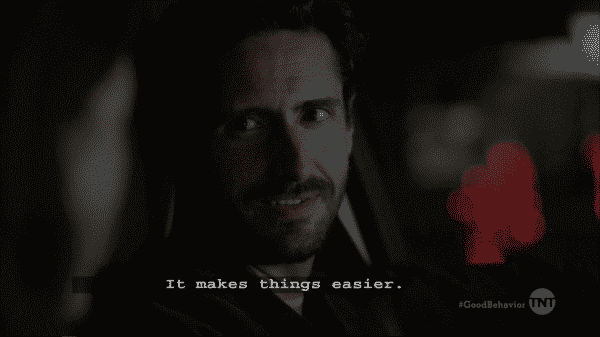 In a way, learning about Mickey sort of reminds you how universal Letty’s story is. What is she but a girl whose mom was neglectful and she lashed out, self-destructed, and is in the process of building a new self? Heck, isn’t Estelle doing the same thing? Wasn’t her being a better mother to Jacob than Letty part of her reinventing herself? Becoming someone more loveable than the person she was before? A mother, grandmother rather, who may have been stern but was someone this child would hug with open arms?

Even Javier. His desire to be needed, to sometimes overdo it when it comes to taking care of Letty and Jacob, isn’t that him trying to dig deep down inside of himself and find some good. Make it real and not just a person he tries to be like he is performing drag?

I say all this because there was so much focus in seeing Michelle Dockery in drag but what we got was a very unexpected story. One which humanized, perhaps further normalized, the lives of people often only shown when it is time to entertain us. That is, as opposed to their vulnerable moments of which we may see in documentaries like Paris Is Burning, Kiki or Check It, but outside of Star, rarely get in full view. Yet, here is hoping Ryan Murphy’s Pose [News about his new show which will feature the largest trans cast ever for a scripted series (per Deadline) – External] will help fill in that void.

If anyone has Mickey’s speech after Letty performed can you post?