This episode is heavily focused on Riley, Greta, and Greta’s family this episode, and that’s why it is damn near perfect. 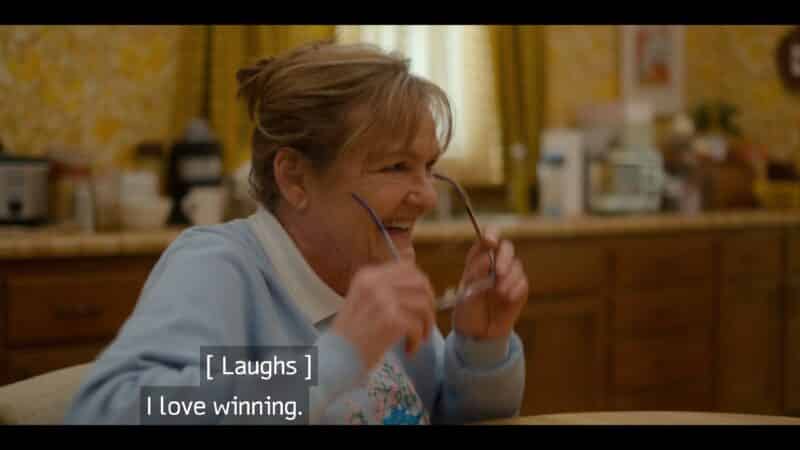 Bo and Chester are official. I’m talking Bo meets Chester’s grandmother and even gets a story about Chester’s mom, who, generally speaking, isn’t talked about much. Well, beyond Chester finding different ways to joke about her being dead. Add in them making out, maybe more? It seems Chester is in a blissful place.

Riley is on a path of destruction, and her future step-mom, Janelle? Yeah, she isn’t helping. But, while Sam is struggling a bit to win over Riley, Ana does so quickly. She helps Riley gets a job, offers her a room if she ever needs to escape, and pretty much treats her like she is her own niece. If not the daughter she didn’t have. Because of this, things are a bit awkward – mainly for Greta. The reason? Because Greta still doesn’t know where things stand with Riley, so Ana inviting her to stay for dinner, Sela getting to know her, it is unexpected and makes the usually anxious Greta all the more nervous.

What doesn’t help is Greta already invited Luz to dinner since she wants to get to know her better. It’s just, Luz is firmly who she is, Greta still kind of exploring, and Luz really doesn’t have the patience for closeted girls. So Luz getting to come over and meet Greta’s family was supposed to be a means of showing her commitment to what they could be, but then Riley was there and, yeah.

But what makes bad turn worse is Luz really gets on Sela’s good side by fixing a part of the refrigerator and puts her arm around Greta in a way that very much feels like she is claiming her. This, by the way, doesn’t lead to Luz and Riley having issues, but Luz does make it clear she plans to tell Greta what happened eventually between them. So it’s just a question of, when?

Though, in the long run, it seems Greta isn’t fully over Riley, for when Luz goes for a kiss, she gets curved. Which for Ana might be a win since Greta has already poisoned the well based on how she talked about Luz previously.

[…] you should know the moment in life you stop apologizing for yourself is the moment you win.
— Chester (Quoting His Mom)

I’m So Torn Between Luz and Riley

Here is the thing, when it comes to Luz and Riley for Greta, you have two opposites. With Luz, she knows what she wants, and is ready for a relationship, and solely wants one which has PDA and isn’t a secret. With Riley, she doesn’t know what she wants, but she does feel something for Greta she wants to explore. However, unlike Luz, she isn’t well versed in relationships, never mind between two girls, and while this does lead her to take things slow as Greta wants, unfortunately, romance is foreign to Riley. So for her, as shown in the motel, hand-holding jumps to sex before there was even a date. Which sort of makes a lose-lose situation for Greta. Luz takes the initiative and makes her feelings known, but Greta isn’t necessarily ready to be fully out. From what we can tell, she does identify as queer, but in terms of being out and proud, she isn’t there yet. She’d rather just be Greta, who happens to lean towards homo-romantic relationships.

Then when it comes to Riley, there is history and a shared sense of newness. Both having one of their first relationships makes it a shared experience, rather than Greta feeling like she has to catch up. However, Riley isn’t that expressive with her emotions verbally, and rather do so physically. Which, with Greta not necessarily comfortable with being sexual yet, makes her immensely uncomfortable.

Yet, strangely, despite Greta not seeming ready for a relationship, there isn’t this desire to just see her be single. But as for who is best for her? It’s really hard to say since both give Greta something different, and Luz is too new to just write her off.

Chester Getting The Kind of Romance The Heteros Always Have

As noted in Beautiful They, one thing LGBT+ youth, especially if they are people of color, need is romances that don’t make it seem living your truth means you will have to earn your happy ending. Now, this isn’t to downplay Chester not having a real date or relationship before Bo, but one would submit that, outside of being bullied in elementary school, for being one of the few Black kids, at the very least Chester’s sexuality hasn’t been an issue.

So to see him with Bo and in bliss? It makes you swoon, doesn’t it? Though, I do wonder, how will Chester be when asked to meet Bo’s family, who, with him being Egyptian, could potentially be conservative?

I think the point of showing Sam not really getting through to Riley, despite being young, kind, and attentive, is that what may have worked for Chester may not be who or what Riley needs. What Riley needs is someone like Ana who is an adult that exists outside the confines of having to pretend some form of perfection. Ana is messy, loveable, curses, but knows how to flip the switch from being relatable to being an adult who can actually handle a situation.

Something that we all need. Genera+ion: Season 1/ Episode 11 – Recap/ Review (with Spoilers)
Trajectory: Plateau
This is the kind of episode that makes me wish this was all Genera+ion was about. Just Chester, Greta, and Riley, and them navigating Anaheim and life.
Highlights
I'm So Torn Between Luz and Riley
Chester Getting The Kind of Romance The Heteros Always Have
Ana As Riley's Safe Space
Low Points/ On The Fence
86