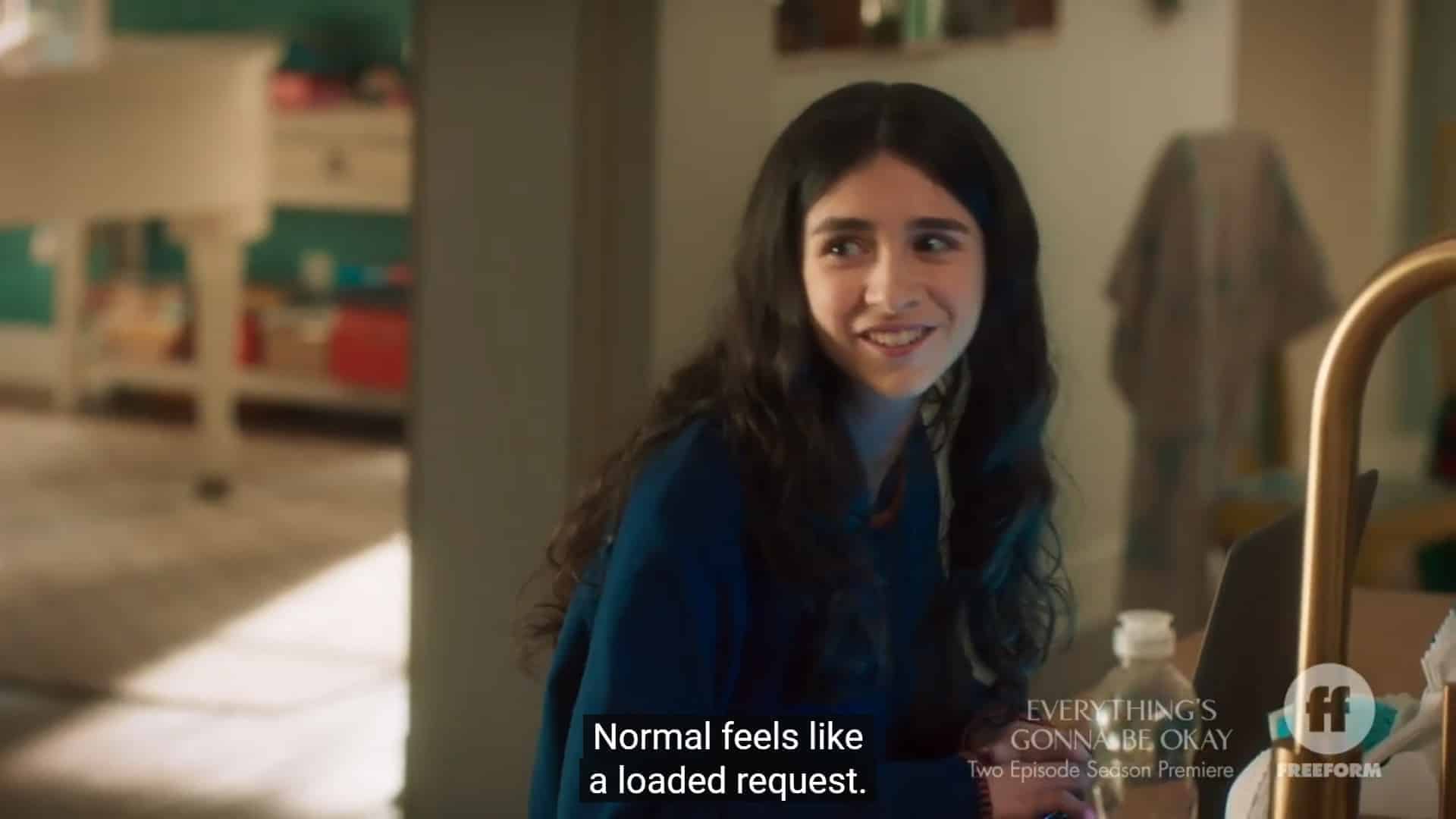 Genevieve noting that normal feels like a loaded request

As Matilda closes a chapter in her life, Alex learns his parents are doing so as well. Also, Nicholas may have made friends out of Drea’s parents.

While Matilda knows she isn’t queer, giving up Drea as a girlfriend is hard because she loves her just doesn’t want to do anything with her vagina. But what doesn’t help is Drea isn’t really capable of speaking sexually like Matilda to even will herself into the idea of maybe experimenting more, so she begins questioning if this is the beginning of the end.

Ultimately, after talking to her siblings about it, Matilda ends things with Drea, and in doing so, Suze shows that between having trouble with anxiety, possibly being autistic, or just being different, she uses the same techniques Drea would to calm down. As for her husband, Toby? Well, despite being a bit weird himself, it seems he is the one keeping the family together and making sure things, at the very least financially, are steady sailing.

But, despite how chummy Nicholas is getting with Toby and Suze, Alex isn’t that fond of them. He doesn’t think they are fun and sort of hates them. Mind you, Alex is in his feelings about his parents divorcing, so watching a married couple bicker but clearly not have divorce on his mind is triggering. Though, he’ll get past it.

Matilda Not Stringing Along Drea

Whether it be fear of loneliness, losing Drea as a friend, or wanting a placeholder for her own ego, Matilda could have very well tried to stretch out keeping Drea. However, thankfully, she was honest with her and let her go. Thus opening Matilda to a world of new opportunities once the pandemic is over and she can interact with people again.

There have been times when Alex, despite seeing his friends and knowing he wants to be a dentist, seemed like an accessory. Something to bolster Nicholas and not shine too much on his own. However, with meeting his father, learning his father signs, and that his dad is divorcing, he got a moment in the sun. The kind which made it seem that, in his relationship with Nicholas, it isn’t always about operating based on what Nicholas wants or his moods, or even Nicholas’ attempts to be unselfish. Alex got to just be for once, and that was pleasantly different.

The season trailer presented us to Genevieve getting a boyfriend but, where is he? Also, considering how Genevieve has attached herself to Nicholas and Alex, how does she end up meeting a guy? Never mind dating him to the point where she needs to have the talk with Matilda?

Either way, here is hoping he comes around soon because there may come a point where Alex decides he is tired of Genevieve being rude to him, and he decides to tell her about herself like Matilda did. Because Alex dealing with the end of his parents’ relationship may make his patience and understanding deteriorate.

Matilda Not Stringing Along Drea - 83%

With Matilda out of her funk, and Alex pushing against being the nice one of the household more and more, now we just need Genevieve to step out of her comfort zone, like we saw in New York.