Euphoria: Season 1, Episode 7 “The Trials and Tribulations of Trying to Pee While Depressed” – Recap, Review (with Spoilers)

Cassie is focused on in this episode, and honestly, after all we’ve gone through, at this point, what tears are left to cry?

With Jules not answering texts, then disappearing, Rue is forced to focus on the way and obsess over that rather than Jules. She drags Lexi into this, and together they do enough detective work to piece why Jules’ mood has shifted, and all signs point at Nate. After all, he is her “Tyler,” she changed her story for him, and there is likely more, but Rue struggles to figure that out, and Lexi has grown tired of trying to keep up.

Leading Rue to Fezco since, with him being a dealer, his hours coincide well with Rue’s need to be heard, responded to, and humored. However, between taking care of his grandma and dealing with Mouse wanted him to sell more product, he got a lot on his plate. But, with it being clear Nate is messing with Rue and her people, and Rue still having a special place in Fez’s heart, he threatens Nate. Which might have been a mistake. 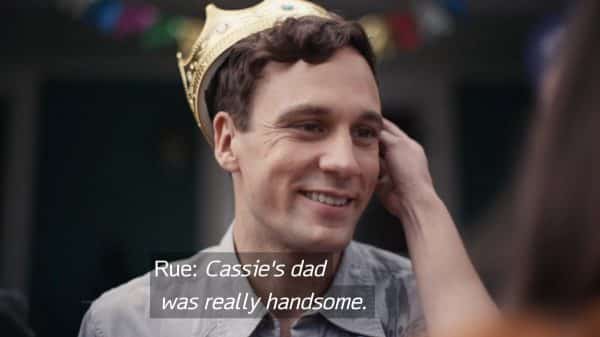 This episode focuses on Cassie, and we learn quite a few things. The main thing being her dad, Gus, is an addict and at one time it was just alcohol, like it is currently with Suze, but it evolved to fentanyl, amongst others, after he got into an accident. To make matters worse, he barely sees Cassie or Lexi and even when he was trying to be a family man, between Suze perhaps cheating on him, or him cheating on Suze, there were a whole lot of arguments.

Thus giving us the familiar story of a girl looking for love in all the wrong places and often finding nothing but guys willing and able to take advantage of her. To which she gets little to no sympathy from Lexi since she is a bit jealous of her sister. Well, at least until things really hit the fan.

How? Well, Cassie learns she is pregnant. To which McKay begins with the response she didn’t want to hear, but he cleans it up with time. Which allows Suze to tag in so she can be there for Cassie as she goes to terminate the pregnancy

Suze isn’t the only one who gets to have an unexpected mother/ daughter moment, however. Leslie, who has been but an echo of a memory, helps Rue as she goes from manic to depressive. A state for her that is so bad she spends almost a whole day in bed, watching reality TV, and refusing to handle going to the bathroom – even as her body screams in pain. Luckily, Leslie finds her, helps her, bathes her, and with Rue feeling open and vulnerable, she admits she needs to go back on medication for while she loves the highs of mania, the lows of a depressive state really f*** her up. I’m talking about, while at Fez’s house, while Mouse is there, Fez’s grandma Mary’s pills were talking to Rue. It’s like they knew she was about to come down.

Speaking of Mouse, he is growing tired of Fez’s lack of ambition and wants him to step it up. Which Fez pushes back on but ultimately Fez is given no choice. But considering Nate decides to retaliate for being threatened with calling the cops, it seems Mouse may have lost a consistent dealer. 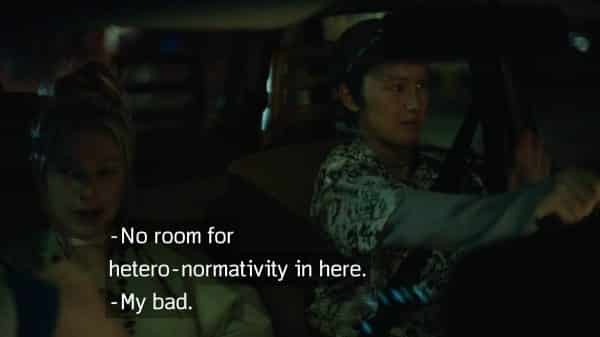 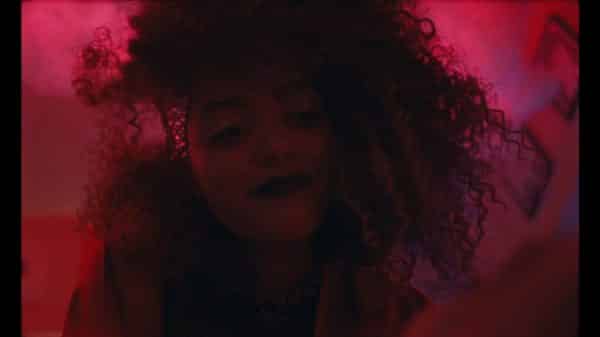 Bringing us to Jules. She heads back to where she was before East Highland, but this doesn’t mean she spends time with her mom. Instead, she spends time with her friend TC and their friend Anna. During that time, she, Jules, talks about Rue, her dating/ sex life, as well as her, I wouldn’t say battle with femininity, but her trying to grasp what it means for her, how to express it, and also getting people to recognize, if not validate, it.

Which is why Anna finds it easy to seduce Jules a bit. For Jules is in a weird place. Rue and she are complicated, Jules still has a thing for Nate, even if she is scared and hates him, and here is Anna. She is uncomplicated, lets Jules dominate her and make her feel powerful. Not to imply Jules now is in love with her but does get to work out some of her frustrations with Anna.

But, in the end, Jules is the one who has her heart. So after a wild night partying and messing around with Anna, Jules texts Rue to catch up.

#euphoriahbo #feelEUPHORIA Have men in your family said the same creepy things to you?

#euphoriaHBO #feelEUPHORIA Nearly every week we did a poll about who you want to see featured next and Fezco was #1 consistently. How do you feel about his backstory, likely, not being fleshed out in the finale?

“[…] the absolute worst part of depression is that even though you know you’re depressed, you’re unable to stop yourself from getting worse.”
— Rue

Am I Feeling What Rue Is Feeling?

With Euphoria, thus far, being shocked, emotional, and pissed was a normal thing. However, something was different with this episode. I think the combination of the almost hum in Zendaya’s speaking voice combined with her describing the effects of depression created a trance-like state. One which may not have led to her duplicating the pains of not peeing, but definitely the lull she was experiencing for most of the episode. Maybe the mania too for watching her go a mile a minute as a detective was like a sugar rush.

Addressing The Creepy Commentary On A Young Girl Growing Up

While but a small part of the episode, you have to appreciate the show noting how uncomfortable it can be to go through puberty as a child with men making inappropriate comments and touching you. All in a way you may not see, at the time, as possibly pedophiliac, or outright inappropriate, for either you don’t want to make a big deal of it, don’t even think about the situation, or are in shock. And I don’t think enough shows brings up how weird, and anything but funny, it is for someone to say, “My how you’ve grown” to a young lady.

But maybe it is just the connotation has changed over the years.

A person can watch Pose, read Janet Mock’s books, and take note of other representations of trans people in the media as much as they want, yet there will be some things you’ll likely never understand. Jules relationship with feminity is one of those things. But you have to love getting to see her trying to explain and work out the conflict she has with it. Particularly as a trans girl who, assumingly, hasn’t had bottom surgery, so there is the conflict of, from the waist up, the hormones making Jules look feminine yet there being this thing that is the epitome of masculinity.

It seems, to a certain degree, Leslie will have some form of focus in the finale. Maybe just her point of view of Rue going from a baby to who she is now, but just imagining that journey as a parent already has me feeling like sandbags are being placed on my shoulders. Yet, for all the hell she has gone through, there is that silver lining that we saw in this episode. Rue allowing herself to be vulnerable, her baby again. Also, open enough to admit that she needs help and can’t figure out how to handle things on her own.

Jules’ Journey Away From East Highland

If Jules talked about TC, and it didn’t seem she left her old life behind in a clean break, maybe her heading back, hanging out, and all that happened would have been a stronger plot. However, with it coming out of nowhere, it made her escape seem random. Add in her not checking in with her mom, us seeing how that relationship is in modern times, it felt we missed a grand opportunity. One which could have answered who was Jules before her life got consumed by Rue and even make this trip seem less about escaping Rue and the Nate drama, and just Jules rediscovering who she is, or isn’t anymore.

With it appearing Fezco won’t be featured in the season finale, so comes the disappointment in seeing him go down and question what may happen to him, his grandmother, and Ashtray. Questions which could be answered in the finale, but with Nate’s comments about Fezco dropping out of high school at 20, seeing him bathe his grandmother, his little brother being in as deep as he is with Mouse, it makes you want to know what led up to all of this? So having to likely wait a year for an answer makes what we see happen frustrating.

Cassie, Like Kat, Got Eclipsed In Her Own Episode One of the problems with how Euphoria handles some of the characters, specifically when they focus on them, is they front-load everything. They give you all this information, barely given any of it time to breathe, and then quickly we watch the show move onto Rue, Jules, and everyone else. Making it almost seem like when they talk about Kat, or Cassie, it’s more so an obligation, keeping up with the routine established, then there being a true investment and the show wanting them to unfurl before us.

For really, outside of answering what reason Suze drinks so much and where is Cassie’s dad, what did we get out of this? More scenes of McKay being a douche, being reminded of Cassie’s reputation, as we have been nearly every episode, and very little which would allow us to say we got to see behind the curtain. Take her friendship with Maddy, relationship with Lexi, and the others. While they came together for the cheating on McKay chat, we didn’t get to see Cassie perhaps attempt to use them to deal with a mom who is often drunk. Never mind get a true sense of the family dynamic. It was just more of the same with a few new details. Nothing necessarily groundbreaking or with an “A HA!” type of moment.

Considering how much Maddy seemingly valued the idea of being a bad b***h and having bad b****es as friends, I find her cutting of Kat strange. Yet, Kat’s response reminds you that, similar to Jules, while she presents this strength and assured persona, the right people saying the wrong thing can easily decimate that. For what she built, perhaps what we all build, it to keep outsiders from tearing us down and destroying what we worked so hard for. But we never do anticipate friends and family hitting us from the inside.

Leading to the need to wonder, considering Kat, maybe before Rue, was one of Jules’ friends, will this push them to be closer?

Addressing The Creepy Commentary On A Young Girl Growing Up - 85%

Jules’ Journey Away From East Highland - 75%

Cassie, Like Kat, Got Eclipsed In Her Own Episode - 71%