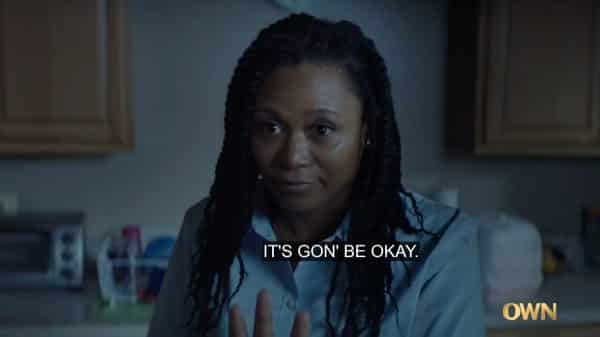 We retrack the day David had, but now focus on Gloria and what she deals with to put food on the table and the roof over her kids’ heads.

Trying To Do Right By This Child: Mx. Elijah, Starry

Mx. Elijah may love Starry, but their lifestyle isn’t really made to take care of a child. Granted, a child damn near an adult, but still needs tending to. So, they try to get them into the Job Corps program but since Starry is trans, using a fake ID, there is a problem. One which leads the recruiter to become indignant so Mx. Elijah removes Starry from the situation and side-eyes the brother who makes it clear skin folk ain’t kinfolk.

A day in Gloria’s life: Co-workers who don’t show up. A boss who, despite her working a year and a month, and being dependable, not only doesn’t take her serious when she applies for a management position but makes a move on her. Then, to add insult to injury, he actually injures her AFTER TRYING TO MAKE A PASS!

This leads to bruised ribs, and who knows what else. Luckily, while the manager Jay might be an ass, Earl, the cook, is nice. In fact, after Jay fires Gloria, since apparently she talks back and is too sassy, he saves her from going to jail for murder. Also, he makes sure Gloria has some food for herself and the boys. Making him a saving grace.

However, between JG burning sheets, which leads the building manager, Mrs. Hartrub, getting on his ass, then in Gloria’s, she gets no peace. Though, she isn’t alone. Raynan, after the drop David did, is pressuring him to do more work. Which, of course, David doesn’t want to do. But with Gloria now not having a clear way to get her and David out of the complex, it seems David may end up succumbing to Raynan one way or the other.

It’s Not Alright, But It’ll Be Okay: Mx. Elijah, Gloria

A child who wets the bed, another covering for him so you have one less thing to worry about, a lost job, bruising, a limp, and another day coming. It’s a lot for one woman to deal with. But Gloria dreams. She does so throughout the episode. Heck, when Mx. Elijah shows up, she dreams about showing out at a ball. But, with two boys at home, one still very much a child, she can’t go. Wants to, but can’t, and ultimately not just because of the boys but because the balls are where a lot of her old troubles stem from.

There is just something about a tease between the way Gloria wishes the way life was, to being slapped back into reality, which helps you understand the rollercoaster of emotions she goes through. Also, how difficult it is for dreams to die. For even with how Gloria struggles, there remains hope. She sees another path, another way, and you can see she believes she can obtain that life. It just may take a while.

For an episode in which it felt like a lot didn’t happen, since a portion was dedicated to Gloria’s dreams, Mx. Elijah still managed to stand out. Be it in the form of going drag as a boring male, seeing them dressed up for a ball, or understanding their relationship with Gloria better. It’s episodes like this which make you believe Mx. Elijah could steal the show from Gloria, even David, but is being held back from truly stunting on everyone.