After Desna’s discovery in the last episode, and what happened to Bryce, she finds herself retreating to the last person who made her feel safe to rediscover herself.

With Bryce flatlining, revived, but now in a coma, Jennifer blames Desna for that and all else that happens. And it isn’t lost on her that she did trust Zlata who caused all of this. So, with head heavy, she runs from the situation and deals with the weight of her hurting yet another person who has done so much for her.

Being that the people Desna would run to nearly all have reason to not speak to her, she doesn’t even bother going to them. Instead, she decides to run off, with Dean, to find Ms. Wallace. From what we are told, she is perhaps one of the few people, when she and Dean were children, who was a good foster parent. Unfortunately, their mother got clean enough to get them back so their time with her was short lived. However, she said to come see her when things got bleak. It’s just, who knew that would be more than 20 years later?

But, seeing her does do the job. She may not be this sweet ole maternal figure she was, since she is older and Desna is too, but she sets her straight.

Desna comes back with a vengeance and starts to reveal to Jennifer, Roller, and Uncle Daddy what she knows about Ruval and Zlata. Which doesn’t come as a shock to Roller and Clay since they figured Gregory was trifling. It’s just now they have confirmation. But, with Roller knowing Zlata has put a hit on Clay, even getting Chip involved, he is forced to live at Polly’s. As for Roller? Well, with his son at Zlata’s, he may try to deal the best he can over there for now.

But, one issue of Clay being at Polly’s is that Dr. Ken is wired up and she doesn’t know. So, on tape, she ends up admitting to being a criminal and madam and that means Arlene has another entryway into taking down whatever is going on. Especially since Polly has a record so you know Arlene getting into her business puts her in a situation she can’t easily bounce back from. 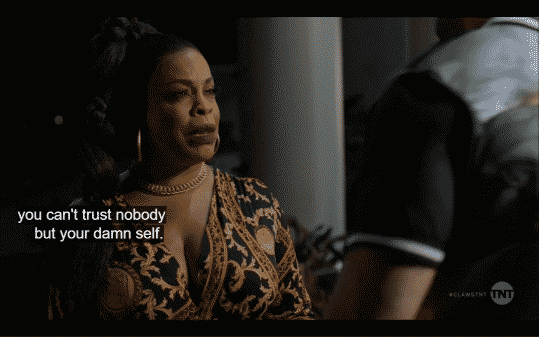 Desna: You can’t trust nobody but your damn self.

As noted in the last episode, I’m not a big fan of the direction this Zlata thing went. Gregory and her being in cahoots, both playing Zlata for some weird sounding plan, and then the Bryce thing, it seems like the show tried to up the drama a bit too much. For as much as you have to appreciate Desna diving into her past, finding her center after being so heavily influenced by Zlata, and even Clay, you have to wish a different route was taken.

I won’t rehash what I wish happened, for what is done is done, but as much as Desna being in command and Clay seemingly going with it might be interesting, expectations have been lowered a bit. For now, it just seems like a major clean up job is going to take place and we may just cycle, from season to season, with a new villain or oppressor. After all, there are so many more gangs down near Palmetto to go against Clay and Desna so it isn’t like they are in short supply. Add in the whole gang could end up in witness protection.

Either way, it’s nice we got a few flashbacks and Desna got her mind right but I must admit I feel the need to rearrange my pecking order when it comes to Sunday night programming. With this definitely on the verge of being moved behind Sharp Objects.