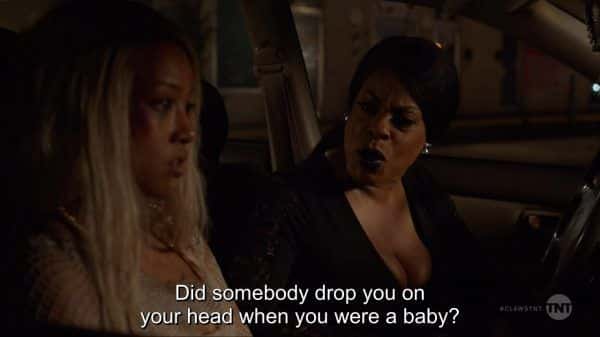 As Virginia comes up with an elaborate tale of what happened to her, Uncle Daddy also works up some manipulation to get what he wants for this situation.

Being that Virginia refuses to listen to Desna, and has no intention of acknowledging who and what she is dealing with, she comes up with a very elaborate story in terms of where she has been. If you recall from episode 2, Desna said she was with her mom – who is dead. So, Virginia comes up with this grand tale of being kidnapped by the people who killed Roller, having a burlap sack on her head, animals or men putting peanut butter on her feet and eating it off, and just a whole bunch of nonsense. 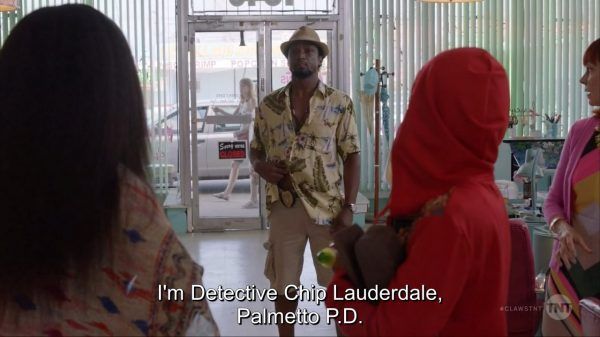 The type Desna fears between Uncle Daddy and this detective Uncle Daddy uses named Chip, the truth may end up being revealed. Thus forcing Desna to become this girl’s surrogate momma and take her in. For if she doesn’t keep her eyes on her, who knows what she may say next.

It is hard to look at Karrueche Tran, her past work, what she formerly was most known for, and connect that with Virginia on Claws. This girl whose career barely started three years ago is holding her own against TV veterans. Much less Niecy Nash who is just now getting her due and is putting people on notice? Like most people, I was taught to never judge a book by its cover, maybe even first few pages, but it is difficult to truly fathom this evolution.

However, she plays the child so well I don’t know who else could. For as much mouth as Virginia has, which she uses to do much more than talk herself out of bad situations, there is this vulnerability. A child like one. Something Nash plays off of well and helps really push so you can see Virginia is just doing what she knows. As in, using the only means she has been taught to survive.

But here comes the question: Who taught her all of this? Was it her momma or her roommate? Did she have your stereotypical traumatic upbringing which led to her evolving into this person? I mean, the child has proven herself to be a bad liar so I doubt she is like Polly and has some warped backstory, so what is the key to understanding who Virginia is? 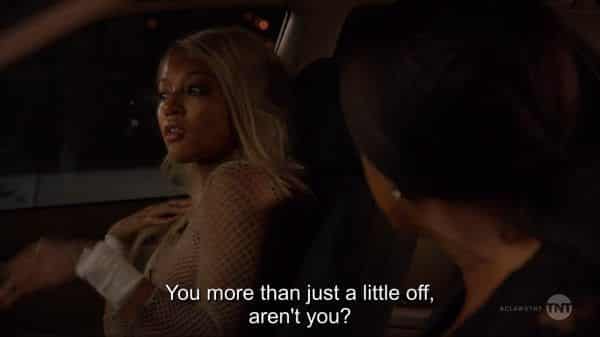 Much less, how she learned how to use a gun and have such good aim? Here is hoping Chip’s investigation leads to some answers. For while Desna may have saved Virginia from her own stupidity this time, she can’t be worrying about her, Dean, the shop, Uncle Daddy, and everything else all at once.

With Roller dead, even is Desna didn’t get all the money she wanted, she is still planning her exit from Uncle Daddy’s life. Of which, so is Jen for with Bryce being a former addict trying to get straight, and her trying to stay off the smokes, the last thing she needs is Uncle Daddy’s BS. So when Desna decides to take some initiative and show up, uninvited, to Mandy’s office party, and woo some of Mandy’s friends, Jen helps her seal the deal.

For, you see, one of Mandy’s friends are getting married and with seeing Desna’s custom nail designs, she is enchanted. So enchanted they make an appointment and what really seals the deal isn’t just the nails Desna and her team design, but the conversation. Be it Jen talking about messing around with a Black country singer, probably explaining that Black child of hers, Ann revealing she was married to a guy for 6 years, who was a professor at Yale, and just regular old girl chat, a bond is formed. One which leads to Mandy wanting to really push for Desna to get the salon of her dreams. For now she sees and understands her vision.

For you can see each woman’s gift in Desna’s shop in her. Like Polly, she can sleuth into swanky occasions and can tell one hell of a lie. Like Ann, she can maintain this certain amount of mystery about her, show an affectionate and fun loving side, but also take your behind out. With Jen, she mirror’s Desna’s gift of gab and protectiveness, and I’d even argue Virginia has some of Desna in her.

With that comparison though, I think you have to acknowledge a theorized cross road. There might have been a time Desna was as vulnerable as Virginia was. Which isn’t to say she was stripping or a sex worker. More so unable to fathom what her next move would be and so she did what she had to in order to survive. Yet, and this is just my thought, maybe someone taught her how to do nails, her parents died and left Dean to her, and so she had to come up with a plan.

Something I think she is trying to instill in Virginia. Find a skill, come up with a plan, and make something of yourself. For youth is fleeting and a hummer [note]Which apparently is another name for a blow job[/note] ain’t going to be an answer to your problems forever.

As has been made clear, Dr. Ken is a hot mess. Because of that, he can’t run the clinic alone. Problem is, the only other person Uncle Daddy trusts is Bryce. Someone who is way over his head, is fresh out of rehab, and isn’t ready for all that responsibility. So, being that her attempts to keep Bryce from the family business didn’t work, Jen asks Desna to get Bryce acclimated.

Thing is, Desna really does not want to get involved. She wants to be on her way out, not helping someone on their way in, but with her and Jen’s history [note]Which includes helping to sneak Desna into a New Edition concert[/note], she gets talked into it. Which ends up screwing her over. 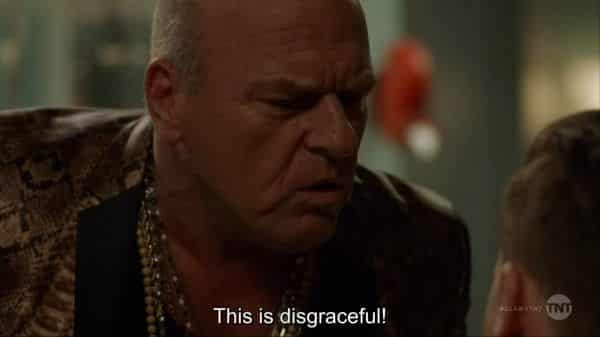 For, you see, Uncle Daddy planned a full on set up so that Bryce and Dr. Ken would end up losing $88,000 worth of product. Which ain’t cheap or quick to recoup. So with him blaming Jen, Bryce, Dr. Ken, and Desna, he has them all back on the hook. Thus keeping his very lucrative business running. One he is thinking about turning into a franchise.

With the crap Uncle Daddy pulled, you have to wonder how long this show is going to keep Desna being indebted to him up? Which isn’t to say it couldn’t do like many shows, like Weeds for example, which has it where one debt turns into a murder and then someone new pops up. For it isn’t like Uncle Daddy’s competition isn’t due to properly introduce themselves. Between the Russians and Haitians he mentions as some of his primary competition, if Uncle Daddy gets killed like Roller, I’m sure they will be battling for that clinic and maybe Desna’s shop too. 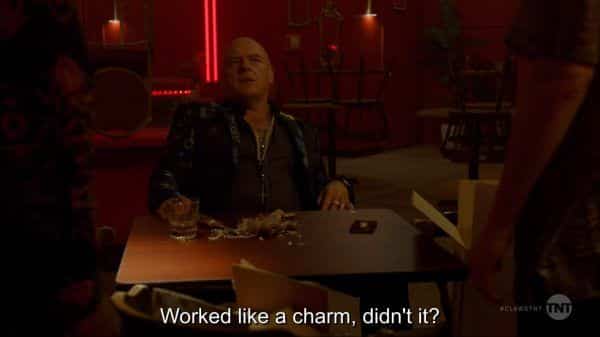 Thus sending us on a never ending cycle of “How is Desna going to get herself out of this one?”