Philo reveals a secret which will cause many, including him, trouble. Which coincides with Sophie revealing her secret, and Imogen coming to a realization.

Pity Those Who Underestimate Us: Sophie, Absalom, Jonah

We discover Sophie is simply playing a game. One which is rooted in the idea of taking advantage of her being an assumed simpleton and using that to her advantage. For, in reality, she doesn’t like the word “Critch,” which is a derogatory term. An accepted one, which has perhaps lost its offensiveness over the year, but it remains a derogatory term nonetheless. However, as for what to do with Jonah? Well, she says they should partner up. Both have been underestimated, and it seems they’d be a good match. Though, there is a need to question if she is playing a political game with him or she is being genuine.

A World Of Treasures & A Shocking Realization: Vignette, Imogen, Agreus

While wandering the streets, Vignette comes across an exhibition and auction of treasures from Tirnanoc. As you can imagine, with her previous job being guarding treasures, she can’t help but take a look inside and oh is she shocked. Specifically, by the recreation of the library she once guard and some of the books she once protected being there to be gawked and sold. This angers her to the point of staying in the room, perhaps traumatized, defending the room just as she did the one it was based on.

But she doesn’t get to stay there too long. By the time the auction comes, which Imogen and Agreus go to together, she is arrested. Leaving Agreus the privilege of being the only fae member there and participating in a bidding war. Not because he necessarily wanted the specific piece, but to show that he is a rich man. One who can spend 300K and it not break his bank.

This leads to, not the spending of the money but pettiness, a conversation between Imogen and Agreus as she realizes how people act around Agreus and how, at a time, she did as well. She realizes she doesn’t like them, maybe most of the people she knows, but it is becoming clear she likes Agreus and the feeling might be mutual.

Be Wary Of Who You Trust: Ms. Fyfe, Philo, Runyan, Afissa, Sargent Dombey

Philo really tries hard to be with Ms. Fyfe and so, to really test the strength of the relationship, he reveals he is half-fae and that not only gets him kicked out, but she reveals to Sargent Dombey, who outright hates Philo, this little tidbit. Leading to him seeking out Philo to be arrested on charges ranging from him passing to even wanting him to be seen as the murderer. But before he is taken, Philo gets to speak to Runyan about his mother and comes to learn her benefactor was Ezra and Imogen’s father. Also, Afissa knew his mother, and she fills in the details about his mother’s stay, and the night Philo was taken from his mother and the vibe during that time. Which, the way she puts it, makes Philo’s dad sound like a bastard.

The Cat & Mouse Game of Sophie and Jonah

Sophie is really pulling her weight and is a fast-growing favorite. I just hope, unlike Dahlia, just as you really start to dig her she doesn’t disappear on us. Especially since she is making this political plotline far more interesting than Piety, Absalom, or her father ever did.

While you can’t ignore the vitriol Imogen formerly spoke, I must admit that she and Agreus are starting to compete with Vignette and Philo when it comes to being the “It” couple of the season, maybe show. For there is something about them both being outsiders, not really liked, but tolerated, and finding comfort in each other’s company. But, with that said, there is a need to question if we’re going to ignore the complications of them being in an interspecies relationship or not. Never mind her understanding his past and culture, just as much as he has adapted to hers.

Quill, Cabal, And The Men Lashing Themselves

Are these people supposed to replace the Black Raven? Who are they, what are their goals, who is this god they await, and why are they hurting themselves? Should we look at them as some kind of extremist and, if so, who is their leader? Do they have someone with a personality which could make it so Sophie isn’t the only one, with some sort of power, who has some charisma? 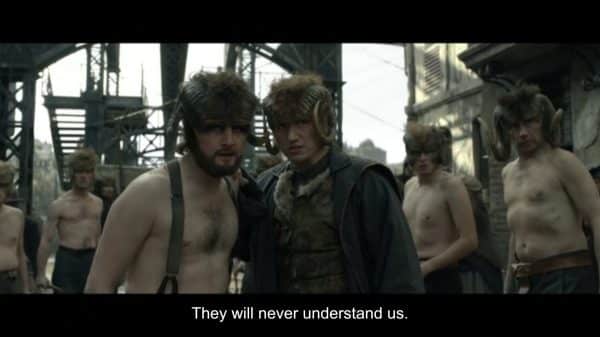 The Mysterious Life Of Aisling

A part of me feels we need to head to the past again and get more of Aisling’s story. That is her time as a popular singer, her relationship with Runyon, and the events surrounding her giving birth to Philo. In my mind, being told this verbally isn’t enough for Philo remains dead on arrival, and Orlando Bloom isn’t helping the situation much. While I understand Philo is reserved and in his head, surely there is a way to show this without making the character seem like someone who is dealing with a sleep deficiency.

The Mysterious Life Of Aisling - 75%

Quill, Cabal, And The Men Lashing Themselves - 60%